That’s what the National Association of Realtors (NAR) commissioned PricewaterhouseCoopers (PwC) to do, and today the companies released the “Impact of Tax Reform on Owner-Occupied Housing,” a report that used the “Better Way for Tax Reform” blueprint to show how suggested changes to the tax law could affect citizens in different income groups.

The “Better Way” blueprint is very similar (though much more detailed) than the proposed tax document released by the Trump administration, so using the blueprint as a jumping-off point can give us a good idea of how taxes could change for homeowners and renters with different income levels.

“Tax reform and lower rates are worthy goals, but only if we can achieve them in a fiscally responsible way,” said NAR president William E. Brown in a statement. “Balancing tax reform on the backs of homeowners isn’t an option.

“A tax reform proposal that hikes taxes for homeowners is a raw deal, and consumers know it,” he added. “Leaders in Washington who are driving tax reform have shown every indication that they have the best of intentions, and we’re hopeful they’ll consider our study as this process plays out in the months ahead.”

What could happen to homeowners?

NAR has been adamant that the proposed tax reform will not be good for homeowners — the association even made tax reform one of its three main legislative talking points this year at its annual legislative meetings.

The research indicates why NAR is making tax reform a priority. NAR and PwC found that:

PwC and NAR estimate that in 2018, an estimated 83 percent of personal income taxes will come from homeowners — which is one big reason why NAR is concerned that the tax reform might place an unfair burden on homeowners.

Back up: What would the proposed plan change, anyway?

NAR and PwC analyzed “an illustrative comprehensive tax reform option that would lower and consolidate marginal tax rates to three rates with a top rate of 33 percent, double the standard deduction, eliminate all itemized deductions other than charitable contributions and mortgage interest, eliminate personal exemptions, eliminate the Alternative Minimum Tax, and cap the tax rate on pass-through business income at 25 percent.” All of these changes were proposed in the “Better Way” blueprint and can also be found in Trump’s tax reform proposal.

If the mortgage interest deduction (MID) is still intact, then what’s the big deal? NAR and PwC say it has to do with the increased standard deduction and the elimination of state and local property tax deductions.

Under tax reform, however, “only a subset of households would continue to deduct mortgage interest.”

“For many homeowners that currently benefit from the mortgage interest deduction, the elimination of other itemized deductions and personal exemptions would cause their taxes to rise, even if they elected to take the increased standard deduction,” said NAR in a statement about the report. “For others, the elimination of the state and local tax deduction alone would result in higher federal income taxes.”

What’s the breakdown on who’s affected and how?

In general, the proposed tax plan would be good for non-homeowners and for all households with AGIs either below $75,000 per year or above $250,000 per year. Other groups, however, will probably be paying more in taxes. 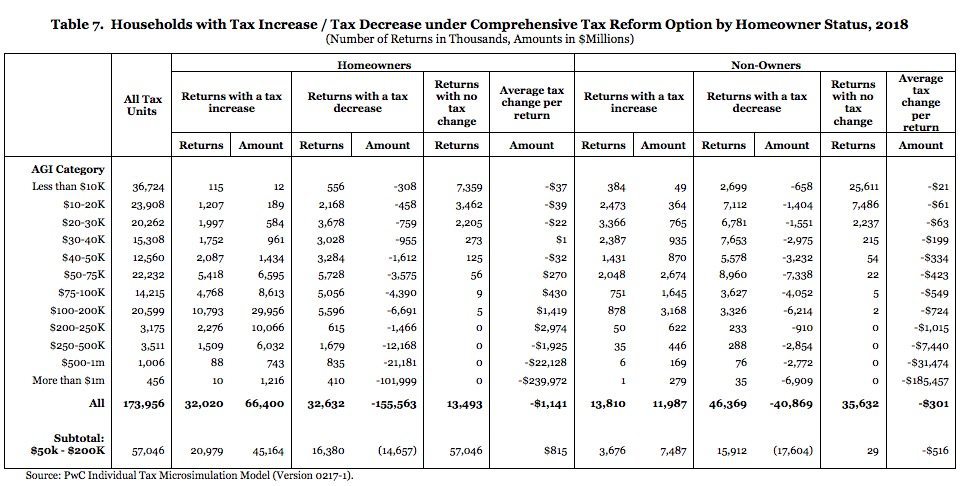 And that will, in turn, have an effect on the desire or ability for many Americans to own a home, according to PwC and NAR.

“The after-tax cost of homeownership will increase while the opportunity cost of home equity (relative to alternative investments) will rise,” states the report. “These factors will lead to a decline in housing prices in the short run as housing becomes a less attractive investment.” PwC estimates that drop at 10.2 percent in the short term, acknowledging that long-term effects could be smaller.

“If the long-run supply of owner-occupied housing is less elastic, a decrease in price could persist into the future,” the companies added.

The NAR and PwC study does not incorporate some elements of potential tax reform.

For example, the analysis looked at a reduction in pass-through tax rates, but it doesn’t include other business tax changes. “Households are generally believed to bear the corporate tax as owners of businesses and workers at businesses. As a result, business tax reductions would impact the overall tax burden of households and their demand for housing,” stated the companies in the report.

The report also acknowledges that there could be big, sweeping changes in the economy caused by tax reform — such as changes to interest rates and the size of the overall economy. “Interest rates under current law likely reflect elements of the tax code, and reform could lead to lower interest rates,” noted the report. “Alternatively, if tax reform leads to increased federal budget deficits or more rapid economic growth, interest rates could rise.”

And as we’ve all learned by now, interest rates affect who’s buying, selling and refinancing, so they don’t exist in a vacuum.

There could be changes in taxpayer behavior, too. “While we have incorporated certain behavioral changes, broader impacts like household consumption decisions and financing decisions would impact tax burdens and housing demand,” stated NAR and PwC.

And the companies noted that “other supply-side reactions to tax reform, such as changes in the level of economic activity in the residential real estate sector, have not been incorporated.”

Jamie Gregory, deputy chief lobbyist at NAR, told Inman earlier in May that looking at the past can give us a window to the future. 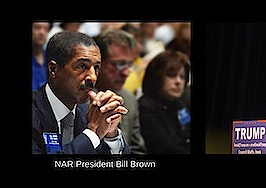