The biggest deal always is the monthly, first-Friday report of the job market in prior months. In theory, May was a downside miss, “only” 138,000 jobs added and a downward revision to April versus the consensus forecast of 185,000 and ADP’s monthly wild-swing estimate (ADP the payroll processor) of 253,000.

Last week was quite an exercise on what financial markets care about and do not care about, although markets are partially concealed by a neutral mask.

The biggest deal always is the monthly, first-Friday report of the job market in prior months. In theory, May was a downside miss, “only” 138,000 jobs added and a downward revision to April versus the consensus forecast of 185,000 and ADP’s monthly wild-swing estimate (ADP the payroll processor) of 253,000.

Long-term interest rates fell a little on the unimpressive news; mortgages are again trying to cross below 4.00 percent, but all evidence suggests that the rate decline was already underway and is a separate story. 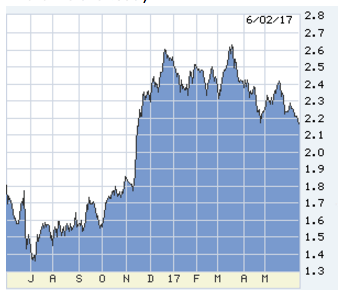 The US 10-year T-note one year back. Note the up-trend last July to November as the Fed’s intentions settled in, which if extended through the election nonsense leads to yields right where we are today.

When new data miss (up or down) in a key report, look elsewhere for confirmation. The numbers in these payroll reports are so big that the inherent error is more than 100,000 each month, give or take. The rest of the report was fine — hours worked, average hourly earnings — and another statistical quirk knocked the rate of unemployment down to 4.3 percent.

Since January, unemployment has fallen from 4.8 percent, and the number of unemployed down by 774,000 to 6.9 million — more than a 10 percent reduction and sustained improvement. Last, another crucial brand-new May datum was plenty strong; ISM manufacturing up to 54.9, and its new orders component just below 60. 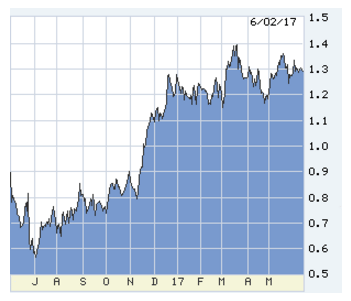 The US 2-year T-note one year back. The Fed-predictor: the hike on June 14 is built in, but not the next. Another hike in September is likely, but may take a month or two to show in trading.

So ignore the jobs report. The Fed will ignore it, too. The Fed meets on June 14 and will increase the overnight cost of money to 1.25 percent, as the economy is plenty strong to justify “removing excess accommodation.”

A fine point: when the Fed raises its overnight rate, market jargon calls the move “tightening,” meaning to make credit less available. Prior to Paul Volcker in 1979, the Fed induced recessions (to cleanse us of inflation) by creating a “credit crunch,” a draining of lendable reserves from banks, not by high interest rates. 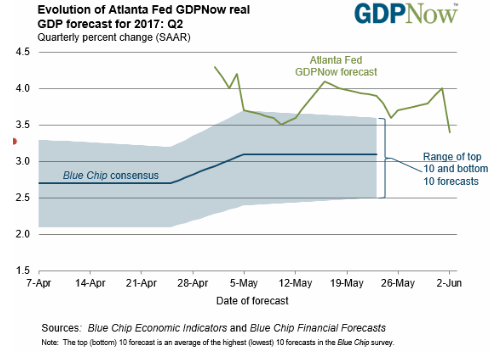 Updated today, the Atlanta tracker came down from last week based on implied slower consumer spending in today’s job report. However, 3% would be a perfect corrective after Q1 1.2%, back to roughly 2% annual GDP.

By the late 1970s, banking had become so diffuse, with electronic money moving at light speed, that the Fed has created all subsequent recessions by jacking rates until the economy crumps. Usually housing goes first.

A June 14 hike from 1.00 percent to 1.25 percent will not “tighten.” There is no sign anywhere that credit conditions have choked. The Fed will move gradually because the whole world is so dependent on financing its ocean of debt, but neither this hike nor the next four will materially slow anything. The game is to reduce stimulus, to let GDP settle just below 2 percent, and monthly job creation below 100,000.

Still, it is odd to have long-term rates falling while the Fed is in the early stages of a long, normalizing increase. I’m sticking to my story: the hysterical bond-buying by the European Central Bank and the Bank of Japan is pushing down U.S. rates. 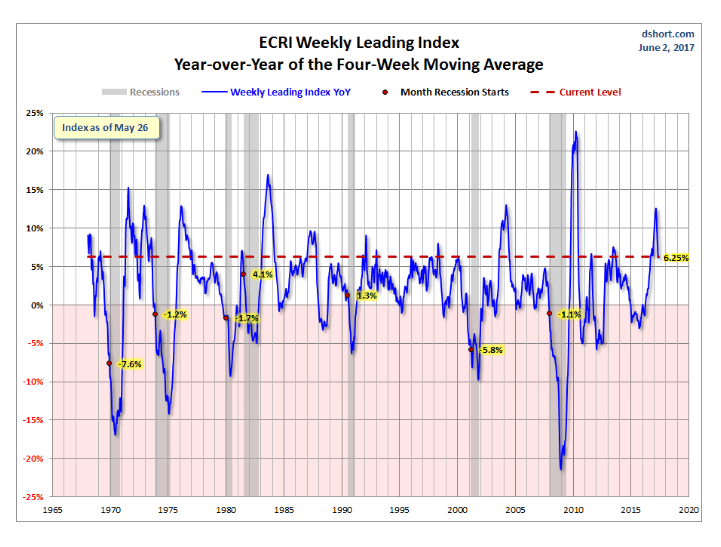 The ECRI is beginning to stabilize, little changed in the last week. Its retreat from sky-high is more good news than bad, still very strong. Note that the index goes back to 1967.

Our 10-year T-note today fell to 2.15 percent, a post-election low. Germany’s 10-year pays 0.275 percent, and Japan’s 0.055 percent. Which would you like to own? Mario Draghi, the ECB head said this week that it is not close to tapering its bond purchases, and U.S. yields fell on that news before Friday.

The market’s mask? A dainty, 18th Century Versailles costume party affair. Just covering the eyes. The VIX (the index which tracks stock market volatility) in May fell to an all-time low. Thirty-one days of normal global news flow — economic, financial, policy, and military — and the U.S. stock market had one volatile day — the day Comey was fired. Sometimes quiet says more than action.

So, enter politics. Be careful, patient, and respectful of all but extremists. Sometimes politics have an overt impact (Comey), sometimes none or masked. Our withdrawal from the Paris accord did not even ripple the water in markets. The accord is an agreement, not a treaty, because neither Obama nor anyone could get the Senate to ratify. Withdrawal changes nothing of economic substance.

The U.S. will still do what we can to de-carbonize. The U.N. report in 2014 stands: To cap warming at two degrees centigrade (3.6 degrees F) by 2050 will require capping annual global CO2 at 1.6 tons per person, each of us inevitably a little carbon factory. That cap will require a 65 percent reduction in China, and 90 percent in the US., which will not happen with current technology, and extreme efforts without new technology would be economic suicide.

The Paris withdrawal had no overt effect. However, it is another thumb in the eye by the all-time thumber-in-chief. The U.S. has no experience with an administration that makes no effort to reach out to opponents or even to independents, instead solely and constantly jabbing at their sockets. There is a price for that.

One price: paralysis in Congress. Gridlock is one thing, and this is something else.

Paralysis is exactly how the VIX and bonds are trading. Bond yields are gradually giving up the post-election spike from 1.80 percent to 2.60 percent. None of the stimulus expected then is going to happen.

Might the 10-year drop all the way back to 1.80 percent, mortgages approaching 3.50 percent again? Could be, but the Fed is on course to intercept.