Markets have been quiet this week in front of a long holiday weekend and next week’s big load of economic data, which will make or break the Fed’s decision to increase the cost of money at its meeting on June 14. Expect “make.”

Markets have been quiet this week in front of a long holiday weekend and next week’s big load of economic data, which will make or break the Fed’s decision to increase the cost of money at its meeting on June 14. Expect “make.”

So, depart short-term immediacy for the long view. The longest: the Fed, inflation, interest rates, and the economy. And a wide view: the afflictions common to central banks everywhere. And an unsettling view: markets trading in narrow ranges often mask surprises. 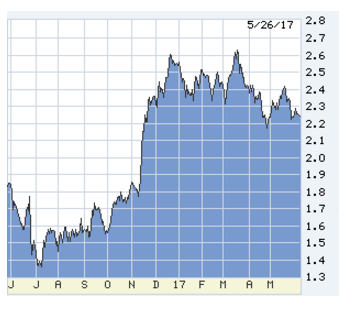 US 10-year T-note in the last year. Very clearly held down by ultra-low rates overseas, and vulnerable to sudden awareness that the Fed means business.

Long-term rates are the most important ones if for no reason other than their effect on real estate, the largest class of assets in any economy. Long-term rates move in response to inflation, and it’s the primary job of all central banks to keep inflation under control. During the 20th Century, “under control” meant down. In the 21st, as weird as it can be, the central bankers’ job has been to raise inflation.

Global consensus today holds that an inflation rate below 2 percent means that some segments of the economy, any economy, will feel falling prices — deflation.

Deflation is disastrous to the banking system because borrowers are forced to pay back new money that’s more valuable than the money they borrowed in the first place, and many borrowers will default. 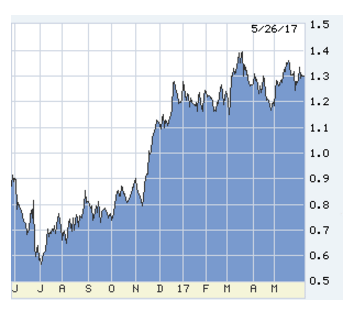 The US 2-year T-note is the Fed indicator, about to rise with the Fed and closing the 2s-10s spread from underneath. A closing spread is a common signal of recession ahead, but not this time.

In just the last 15 years in Europe, Japan, and the U.S. inflation has fallen way below 2 percent — in extreme cases, below zero. Central banks at first fought the problem with low rates, then zero rates, and finally below zero. But below zero works only for small countries and to keep their currencies under control.

NIRP — negative interest rate policy — has been a bust. Central banks have also bought vast quantities of IOUs with invented cash, assuming that classical theory would pay off: Huge amounts of cash dumped on economies must lift the inflation rate, right? In practice, no.

The question about how that can be so is driving everyone batty. The leading-cause theories: Aging global populations slow both growth and consumption, and globalizing trade suppresses wages.

Ben Bernanke is still at it, blogging from the Brookings Institute, and published a large new one this week. 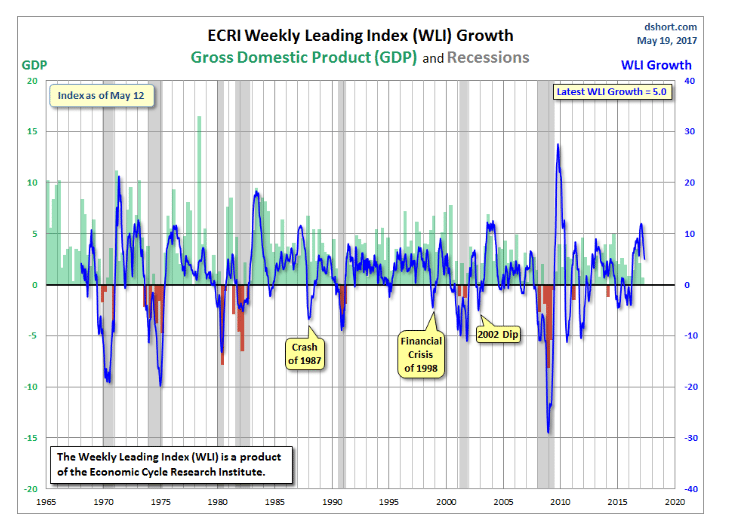 The ECRI is by far the most reliable long-historical index of the US economy, rolling over from an hysterical top to solid growth.

Of course not interfering with current U.S. policy, this new one was a paper delivered in Japan, both a retrospective on its extreme struggles with deflation, and a forward look at policy options.

The Bank of Japan (BOJ) has bought Japanese bonds equal to 88 percent of its GDP. Still no inflation. (The Fed’s holdings are 24 percent of our GDP, and about to run down; the European Central Bank has reached 34 percent, still rising). Bernanke confesses his surprise that this money “printing” has failed to raise inflation to 2 percent, as he has been certain it would.

Despite his confession of prior theoretical error, his prescription, especially for Japan (and the next step in any new U.S. recession) is to expect more of the same, but bigger and harder.

The best Bernanke offers: Jack government spending, and the central bank to buy all the resulting IOUs — and promising to do so open-ended. Bernanke hangs his theory extension on boosting expectations of inflation, which then would change consumer behavior, restoring spend-borrow-spend.

Arguing with Bernanke has not been a fruitful pastime. However, we’re talking about untested prescriptions for a disorder never before seen.

Sitting here preoccupied by simple, little short-run things, the prospect of another Fed hike or two, its super-gradual reverse-QE (quantitative easing) this winter, and what damage 5 percent mortgages might do — think big and long. We — globally — are in a predicament calm on the surface but troublesome.

The developed world is borrowed to its capacity, relying on the central bank magic trick of making IOUs disappear. We — the world — are tapped out except as central banks buy.

And all of the central banks are trying to ooch the rate of inflation from something below 2 percent to 2 percent and not a half-percent more. And they are ooching with the monetary equivalent of nuclear weapons. And since smaller ones have not worked, Bernanke advocates more megatons.

In my 3:00 a.m. conversations with my ceiling, I am uneasy. I take on faith that the central banks can hold things together as they are for quite some time, better in the U.S. than anywhere because of our economy’s flexibility.

But, as the central banks push harder and harder, what is to guarantee that instead of ooching neatly to 2 percent, the pushing destabilizes somebody?

Instead of raising inflation expectations precisely and durably to 2 percent, markets and the public wake one morning to believe that the yen in their wallets and banks is wallpaper?

Do have a nice Memorial Day!

What strong employment numbers mean for the Fed's agenda