Have fun with this one: The Fed hikes, and mortgage rates fall. True. And it’s not the first time! Long-term rates have fallen after each of the three increases in the cost of money since the election.

Have fun with this one: The Fed hikes, and mortgage rates fall. True. And it’s not the first time! Long-term rates have fallen after each of the three increases in the cost of money since the election.

Thirty-year fixed rate mortgages are a closing-cost argument below 4.00 percent, and the 10-year T-note is down to 2.15 percent.

Before the whys and wherefores, get one thing straight: If it were not for the Fed marching the overnight rate upward, long-term rates would be falling more — maybe a lot, a half-percent or more from here, unwinding the entire post-election rise and then some. 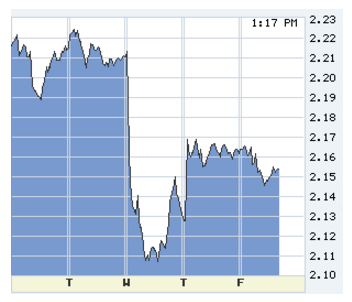 The 10-year T-note this past week. Note the lurch downward before the Fed’s rate hike, and grudging rise afterwards.

Hatred of the Fed is a branch of market dislike for regulation and government in general, which distorts much analysis of cause and effect, especially in perverse trading like this. Charlatans are selling the story that long-term rates are falling in a pre-recession signal that the Fed is overdoing its increases. Nonsense.

The Fed is not even trying to slow the economy. Its hikes to date have had no effect on credit conditions — nor will the next four or so .25 percent hikes. Long-term rates are trying to fall for unusual but simple reasons: inflation is low and possibly falling again, and the ECB and BOJ continue their hysterical purchases of long-term IOUs. 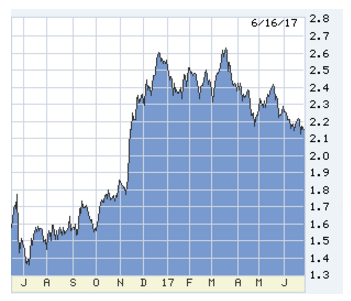 The 10-year T-note in the last year. Hunch here: if the 10s yield does not stabilize and begins to rise, the Fed will hike or unload more and faster.

The Fed will likely put a floor under long-term U.S. rates, probably at levels close to today’s, and then gradually bulldoze them slowly higher, fighting the market and other central banks every inch of the way.

Evidence for the assertions above would be a good idea. First and overwhelming: Long-term rates fell on Wednesday morning before the Fed announced the rate hike, which everyone knew was coming. Before that, three things happened early that morning: oil dropped below $45/bbl in global markets, the Saudi-Russian-OPEC effort to resuscitate the cartel and prices a complete bust. Second, U.S. core CPI in May rose only 0.1 percent, and the year-over-year fell to 1.7 percent. Third, there was a long-overdue decline in auto sales in May. 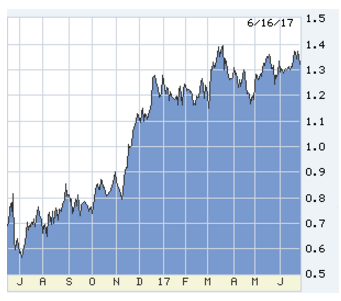 The best Fed-watcher, the 2-year T-note has not priced-in the next hike, but it will.

These data appeared together, and the 10-year yield nosedived from 2.21 percent to 2.10 percent (chart below).

I have no memory of another occasion in which long-term rates plunged hours before a known Fed rate hike. Left alone, long rates would fall further. The Bank of Japan is holding Japan’s 10-year just above zero (0.056 percent on Friday), and the ECB has Germany’s not much higher (0.277 percent), making U.S. 10s a screaming buy. These two central banks are buying $150 billion of long-dated IOUs each month. 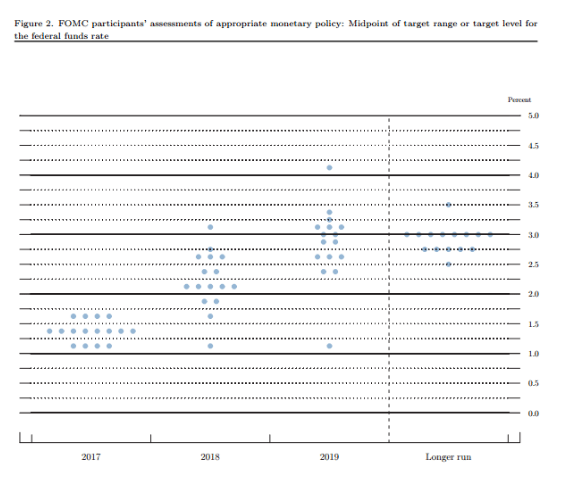 The damned little dots, forecasting the cost of money at the end of each year ahead. Five of twelve regional Fed presidents are relatively extreme hawks, so toss out the top five dots to get a true forecast. Also toss the one low dot, probably St. Louis’ Mr. Bullard, who has been voting this way to make a point eluding everyone else.

The Fed is not going to leave long-term rates alone. Chair Yellen’s post-meeting press conference and accompanying forecast materials were unmistakably hawkish. But, there are big hawks and then little hawks. When the Fed raises the cost of money, it is said to “tighten,” as in credit conditions. Yellen was asked about that and replied, “We’re not targeting financial conditions. We’re trying to set a path of the Fed funds rate.” 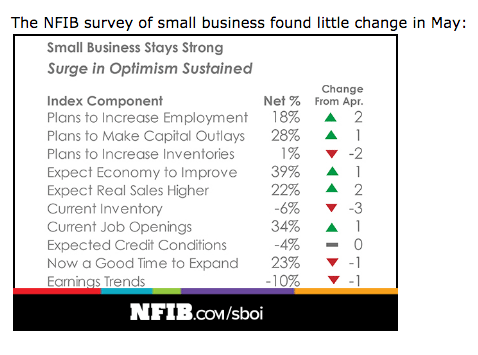 The NFIB survey of small business found little change in May.

Huh? Just as she has said for years, the Fed is not trying to slow the economy (not yet). It is trying to remove excess stimulus for two reasons: so it could cut its rate if it had to in an unexpected slowdown, and in the alternate scenario — an unexpected inflationary acceleration — it would not shock the economy with a big and fast increase.

Nevertheless, a hike is a hike is a hike. It will be very difficult for long-term rates to stay here while the Fed jacks the overnight rate. Watch the spread: the Fed funds rate is now in a band 1.00-1.25 percent, and the 2-year T-note is up to 1.32 percent, 10s as above 2.15 percent. A narrowing “2s-10s” spread is a classic pre-recession signal, but not this time. This time a narrowing will be a warning of higher mortgage rates to come. 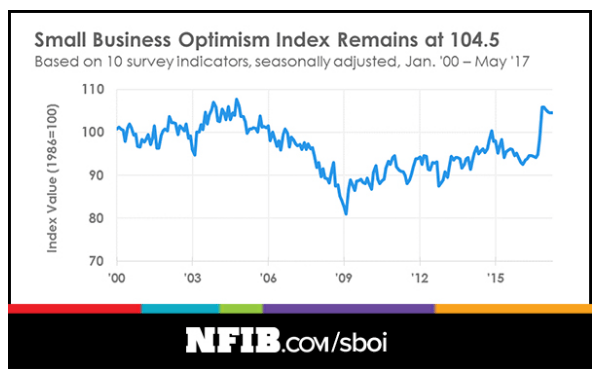 But the NFIB measure of optimism still shows the Trump optimism among its heavily Trump membership — a political indicator, not economic.

The Fed had bigger news. It will begin earlier than expected to unload the bonds and MBS it bought in the QE (quantitative easing) series. Many in markets thought the Fed would suspend rate hikes out of caution while embarking on the unprecedented unwind of its balance sheet. Uh-uh.

The Fed will begin to trim in September, and its “damned little dots” forecast if anything is more forthright to add another .25 percent hike this year and three in 2018 and three in 2019 — to a plateau nearly 3.00% for overnight money. 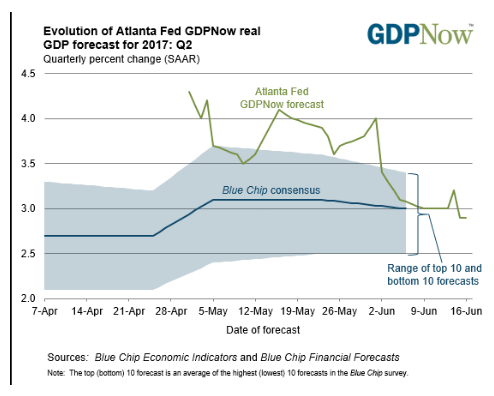 The Fed will not sell the bonds it owns, just stop buying new ones as old ones mature at a pre-announced rate of decline in holdings. Yellen was uncharacteristically overconfident while describing the balance sheet unwind.

When asked about the hazards of unloading bonds, she quoted Patrick Harker, president of the Philadelphia Fed: “It will be like watching paint dry.”

That statement is an offense to the Gods of finance. Unwinding $2 trillion in bonds and especially MBS — that’s a lot of paint and a lot of drying. A lot to step in, a lot of buckets easily knocked over. 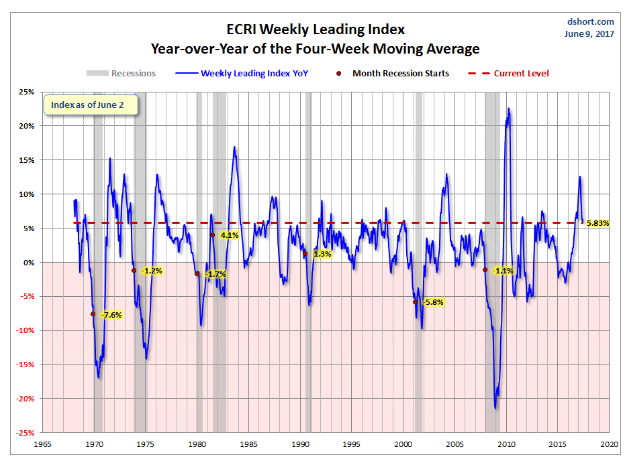 In addition to watching the 2s-10s spread, watch the 10s-mortgage spread. For the last several years, early each morning before the mortgage market has posted rates, anyone could glance at the 10-year, add 1.80 percent and get very close to the retail no-point 30-fixed mortgage rate of the day. A

s the Fed unwinds, its Treasury holdings now are mostly short-term and will have little impact on 10s; but MBS are MBS, a far narrower market than for Treasurys, and we should be prepared for mortgage rates to creep up and away from 10s.

The Fed is doing the right things. I am skeptical of its ability to manage an inflation rate close to 2 percent, but you’ve gotta try.

The Fed just hiked interest rates -- what to expect

Fed announces third rate hike in 7 months
Back to top
Only 3 days left to register for Inman Connect Las Vegas before prices go up! Don't miss the premier event for real estate pros.Register Now ×
Limited Time Offer: Get 1 year of Inman Select for $199SUBSCRIBE×
Inmanpot
Log in
If you created your account with Google or Facebook
Don't have an account?
Create an Account
Forgot your password?
No Problem