As anticipated, today the Federal Reserve implemented a quarter-point federal funds rate hike, increasing its benchmark target to between 1 percent and 1.25 percent “in view of realized and expected labor market conditions and inflation,” the Federal Open Market Committee said.

As anticipated, today the Federal Reserve implemented a quarter-point federal funds rate hike, increasing its benchmark target to between 1 percent and 1.25 percent “in view of realized and expected labor market conditions and inflation,” the Federal Open Market Committee said.

The decision marks the fifth hike since December 2015, when the Fed first raised rates post-financial crisis after an eight-year hiatus.

In March, the Federal Reserve governors voted to raise interest rates by 0.25 percent, to a range of 0.75 percent to 1.00 percent, citing a strengthening labor market and inflation running below 2 percent.

Those factors have continued into the second quarter of 2017 with unemployment now at 4.3 percent and “on trend to fall to 3 percent-something by year-end,” according to mortgage broker and Inman writer Lou Barnes.

“The latest rate hike is partly justified from ongoing economic expansion and also a steadily falling unemployment rate,” said National Association of Realtors (NAR) CEO Lawrence Yun. “However, the Federal Reserve should be mindful of the lower than expected rate of inflation and the consequent low interest rates on long-dated bonds, like 10-year Treasury and 30-year mortgage rates.

“An inversion in interest rates of short-term fed funds being higher than long-term bond yields can easily pull down the economy into a recession. We are getting closer to that inversion point.”

“We expect mortgage rates will remain above the previous years through the summer as the Federal Reserve continues to tighten monetary policy,” said Ruben Gonzalez, economist at Keller Williams.

“While the increase in rates by the Fed has been well-anticipated given the progress seen in unemployment, low inflation and wage growth are still a concern, and we anticipate they will move forward cautiously in the second half of the year given the asymmetric nature of policy available to counteract an economic slowdown versus a nascent acceleration in inflation.” 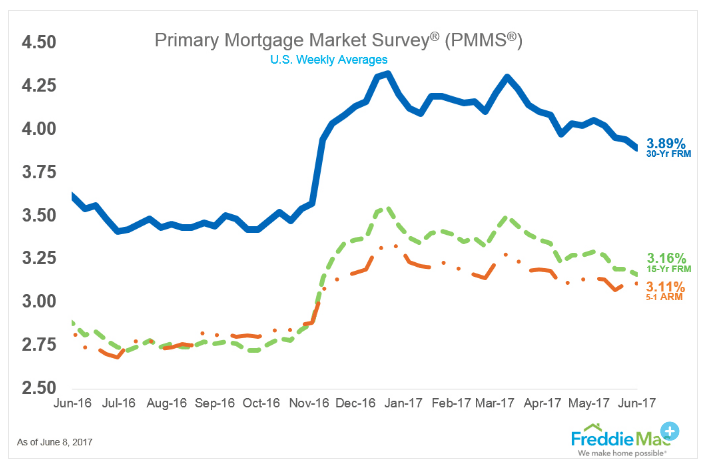 Although the direct impact on mortgages will be minimal for now, when rates jumped 20 basis points immediately after the election amid a wacky post-election bond market — lifting the average 30-year fixed-rate mortgage (FRM) to 3.95 percent from 3.77 percent — some real estate agents reported seeing consumers reacting to the increases with a sense of urgency by locking in rates and resuming negotiations.

Context is important here — mortgage rates remain at historic lows. According to the most recent numbers from Freddie Mac, the 30-year fixed-rate mortgage (FRM) is averaging 3.89 percent, while the 15-year FRM is hovering at 3.16 percent. About one year earlier, the 30-year and 15-year FRM stood at 3.60 percent and 2.87 percent, respectively.

Are more hikes to come?

“In determining the timing and size of future adjustments to the target range for the federal funds rate, the Committee will assess realized and expected economic conditions relative to its objectives of maximum employment and 2 percent inflation,” the FOMC said in a statement.

“This assessment will take into account a wide range of information, including measures of labor market conditions, indicators of inflation pressures and inflation expectations, and readings on financial and international developments.”

Zillow VP of mortgages Erin Lantz added in a statement: “Recent weak economic data — notably, inflation and consumer spending — suggest that the pace of future hikes will remain slow. This hike was largely priced in to markets already, so mortgage rates should remain flat or even fall slightly.

“Political uncertainty around healthcare and tax reform, as well as the Russia investigation, will also help keep rates low. This home shopping season is already competitive, and low mortgage rates will make it even tougher for buyers out there.”