Interest rates have gone down all week (nothing to do with stocks), continuing last week’s trend. The 10-year T-note has fallen from 2.38 percent two weeks ago to 2.23 percent today — mortgages again are trying to drop below 4.00 percent.

The world is moving out there, although it doesn’t look like it. First the explainable, hard-evidence stuff. Then I’ll get to the other stuff (ahem, politics). 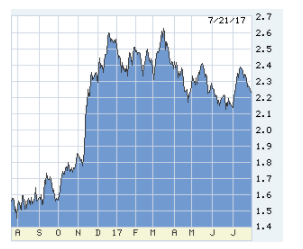 The US 10-year T-note in the last year. With the Fed approaching a hold-point, and unknown effects from reverse-QE, the next big move will be based on economic news.

First, try to avoid reading or thinking about the stock market. In the aggregate, stock markets constantly re-price to anticipate future global business conditions, and stocks are guaranteed to wander back and forth across the probable future baseline — which is invisible and cannot be known anyway. For useful information, watch something else.

The WSJ headline last Friday: “Short Sellers Give Up As Stocks Run to New Records.” You know how that’s going to turn out. The Dow is down 90 points so far. 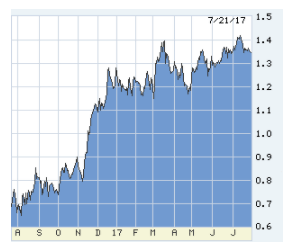 Interest rates have gone down all week (nothing to do with stocks), continuing last week’s trend. The 10-year T-note has fallen from 2.38 percent two weeks ago to 2.23 percent today — mortgages again are trying to drop below 4.00 percent.

The primary rate-mover has been repositioning by the Fed and the European Central Bank (ECB) — but that “other stuff” is in play, too. 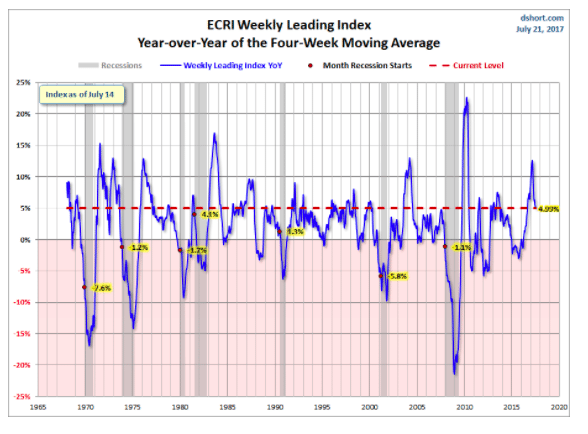 The ECRI index of the economy is in a nice, healthy spot. The ECRI also forecasts a cyclical decline in inflation, although I think their metrics are confused by false signals from the Trump Trade and its unwinding.

Also down is the dollar, and therein lies the tool to explain the role of the central banks. Way back, before the Great Depression, currency values mattered a lot because of gold madness. To hold on to their gold, nations were prepared to wreck themselves by over-valuing currencies. After WWII, unhinged from gold, currencies could move in healthy and constant recalibration to changes in relative national productivity.

Persistent modern-era misunderstanding began with Ron Reagan’s pride in the “dollar standing tall.” The dollar had fallen in the 1970s because of the inevitable decline in U.S. post-war dominance, and because bad policy across three administrations had allowed an oil-price shock to become the worst inflation of the century. The dollar began to “stand tall” because Paul Volcker pushed prime to 22 percent to stop the inflation. 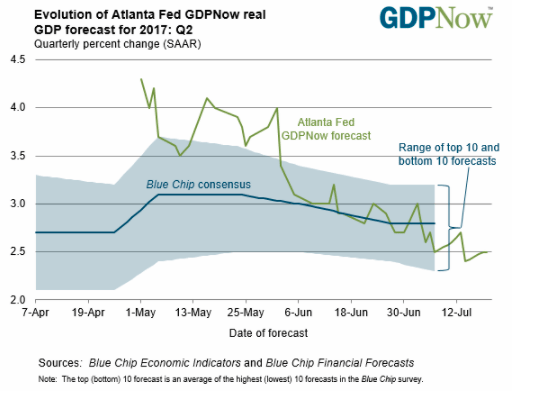 Right there is Rule One of currency movement: In the short term, relative interest rates drive currency value. If U.S. rates are higher than elsewhere, global money will pour into the dollar. In the long run things like trade flows and fiscal policy usually dominate, but in the short run it’s interest rates.

The value of the dollar relative to other currencies is not cause; it is effect, and useful information. Extremely under- or over-valued currencies can create or suppress inflation and trade, but normal-range shifts like today’s are symptomatic, not disease.

Since the beginning of 2015 until May, the euro traded within an inch of $1.10, held so low by massive bond-buying by the ECB after the Fed had stopped its own QE (quantitative easing). The euro has risen close to $1.17 in two months. In those two months these causative events: Europe is doing a little better, and under heavy (what else) pressure from Germany the ECB is signaling a taper to its bond-buying, the announcement probably coming in September. The ECB is petrified by memory of the U.S. Taper Tantrum, the upward explosion in U.S. rates when the Fed made its own announcement.

Even if tapering is modest, European rates have risen and so has the euro. Meanwhile the Fed in the same timeframe has entered reverse course. Yellen has signaled the Fed may be close to the end of rate hikes, and will likely suspend them while beginning to let is QE-bond portfolio to run off. Fed down, rates down, dollar down.

That neat calculus must be modified by two imponderables. First, inflation. Fed, ECB, and BOJ (Bank of Japan) models are hopelessly broken, without predictive power. The central bankers are all flying by feel, and they know that their history-based instincts are misleading. Try flying with bad instruments and an inner-ear problem. They have been trying to induce inflation for most of a decade and failed. No one knows if the risk is up or down.

Second, that other stuff.

The U.S. government has been in some form of gridlock ever since 1996, Bill Clinton’s second term. Dubya had a brief and unfortunate spurt of activity, and Obama had Obamacare, each early in each first term.

That period also overlaps with the rise of China, accelerated globalization, undermining of the U.S. workforce, and the inconceivable effects of the internet and iPhone upon the U.S. body politic, our sources of information and our understanding of each other.

The arrival of Trump is taking awhile to process, but financial markets have begun to react, sagging at each new bout of ineffectiveness. These fits of inaction are hardly his alone: Congressional leadership of both parties today is incompetent beyond historical imagining. Economic consequences can’t be measured directly, but in every boardroom, big or small, now there are conversations about political risks and how long they can continue.

I have hope. Big hope. One definition of an extremist is a person who wants to enact policies which will never attract a majority, and intends to force adoption anyway. For whatever reason, this president has joined the Republican extreme wing. Democrats don’t like to think about it, but Obama was closer to the progressives than to the center, no matter what he said.

The foundation for my hope: 20 years into this, we’re going to get tired of it. Either the extremists wear themselves out, or we do. If we’re lucky, both.