Events are moving fast, this account timestamped mid-afternoon Friday. The economic news is excellent. The other news is not.

The economic news is excellent. The other news is not. 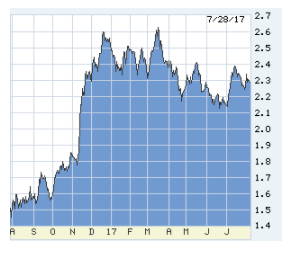 The first estimate of second-quarter GDP arrived this morning, plus 2.6 percent annualized. Q1 was revised down from 1.4 percent to 1.2 percent. Add the two quarter results together, divide by two, and we have 1.8 percent annualized growth in the first half. Nothing wrong with that, especially if the rest of the year follows Q2 upward.

And add a little Kentucky windage: There is a mountain of evidence that Q1 GDP has been under-reported in each of the last several years. Thus the economy is very close to the Fed’s 2 percent growth forecast.

Inflation is still under-performing, but hardly bad news. There is no repeat of the fearful prospect of deflation in 2001-2002, or 2008-2012. Core inflation in 2016 was revised down from 1.6 percent to 1.5 percent, and is running close to that in 2017. With inflation so low, it’s impossible to expect wages to be growing steeply, and they are not.

A caution to all: An economic time like this, in which central banks and markets seem distant from normal patterns, and all cyclical road markers are painted over is an invitation to creative analysis. Not necessarily deceitful, but distorted.

A new analysis from Seeking Alpha, a respected outfit announces a slowing housing market and deteriorating overall economy. Its advice to avoid stocks of homebuilders may be wise (I have no idea), but the analysis itself is 16 pages of distortion. No need to read the copy, just look at the pictures here — a succession of economic charts, each one marked-up by the author as a dangerous downtrend. See for yourself — each chart is truly flat, wobbling across baseline, trendless and exactly what we should see in a 2 percent economy.

New and good economic news today… and markets are dead. Stocks wandered upwards early in the week on strong earnings news and a benign Fed meeting. With 34 percent  of S&P 500 stocks reporting, 78 percent have beaten expectations on the bottom line and 73 percent have topped on sales. Today markets are as unchanged as unchanged gets. A new North Korean missile test this morning indicated enough range to reach anywhere in the US, and still no change in markets.

It is summer, this weekend is lease-turnover in the Hamptons, big shots headed to their half-million-for-August rentals, so maybe that’s it. Can’t be bothered to trade while rounding up the nannies and the helicopter. But there is more to it than that.

But there is more to it than that. This week began with the president’s daily effort to bully Sessions from office. Then on Tuesday, of 52 Republicans in the senate, nine voted against McConnell’s secret Obamacare repeal-and-replace, and seven voted against complete repeal. More senators would have voted against both measures, but as they were already dead, senators instead voted “aye” to seek cover from angry bases at home.

Yesterday, holy cow… the new White House director of communications, Scaramucci, revisited the flight of Icarus to the sun, an entire career burnt out in four days.

The Republican break with the president is underway. The NYT’s token Republican on its Op-Ed pages opened his column this way:

“Donald Trump’s campaign against his attorney general, Jeff Sessions, in which he is seemingly attempting to insult and humiliate and tweet-shame Sessions into resignation, is an insanely stupid exercise. It is a multitiered tower of political idiocy, a sublime monument to the moronic, a gaudy, gleaming, Ozymandian folly that leaves many of the president’s prior efforts in its shade.”

I suspect what comes next won’t be pretty.