South Dakota Republican State Rep. Lynne Hix-DiSanto, who also worked as a licensed real estate agent, has been fired from Keller Williams Realty Black Hills over a Sept. 7 Facebook post of a meme that depicted protestors being hit by a car.

The meme, which began circulating online after the Charlottesville protests in August, included the text: “All Lives Splatter. Nobody cares about your protest and keep your (expletive) out of the road.” Above the meme, Hix-DiSanto wrote: “I think this is a movement we can all support.” 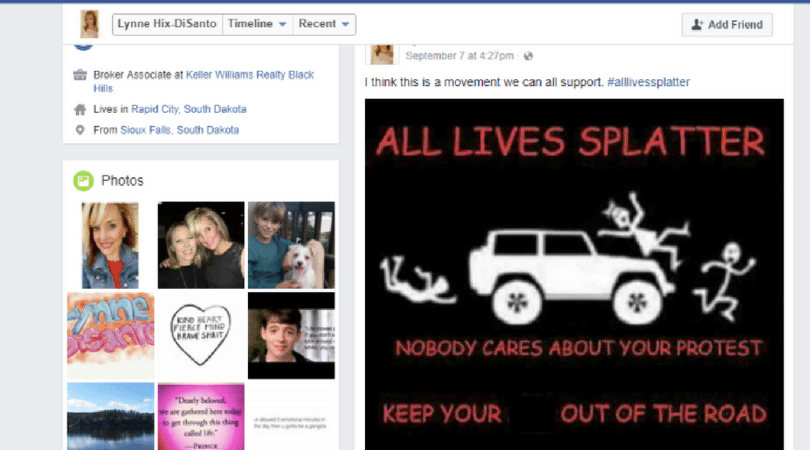 Before Hix-DiSanto deleted the post, The South Dakota Democratic Party took a screen shot of it, shared it on its Facebook page, and released a press release calling on DiSanto to apologize to the “people of South Dakota.”

Soon after, Hix-DiSanto received a flurry of comments, some that praised, and some that accused her of showing support of violence against protestors. By the afternoon, the legislator and real estate agent had removed the post from her page and provided statements to the Rapid City Journal, a local news source, explaining her original intent. (Hix-DiSanto had not responded to Inman’s request for comment by press time.) 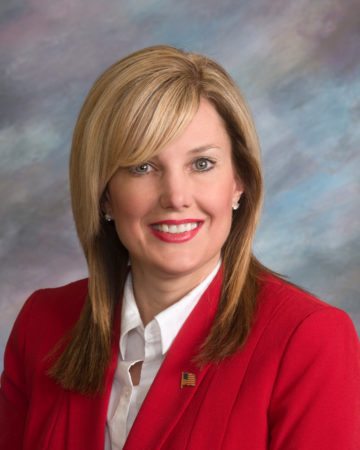 “I am sorry if people took offense to it and perceived my message in any way insinuating support or condoning people being hit by cars,” DiSanto said to Rapid City Journal reporter Seth Tupper. “I perceived it differently. I perceived it as encouraging people to stay out of the street.”

“That was a lack of judgment on my part to not take that into consideration, the highly charged political environment that we’re in,” she added.

Before Hix-DiSanto deleted the post, The South Dakota Democratic Party took a screenshot of it, shared it on its Facebook page, and released a press release calling on DiSanto to apologize to the “people of South Dakota.”

“The right to peaceably assemble is fundamental to our democracy — so fundamental, in fact, it is included in the First Amendment to our Constitution,” said Democratic Party Executive Director Sam Parkinson in a press release.

“Whether one supports the cause of protesters or not, sharing an image promoting running them over is offensive and beneath the dignity of the office Rep. DiSanto holds. Even though she removed the image from her Facebook page, she still owes the people of South Dakota an apology.”

On Sept. 19, Keller Williams Realty Black Hills, the brokerage Hix-DiSanto worked for, made a Facebook post announcing that she would no longer be working for their team.

Some commenters wrote “Thank you,” “Good call,” and “You did the right thing,” while others chided the brokerage for punishing Hix-DiSanto for exercising her right to free speech.

Keller Williams spokesperson Darryl Frost says KW is aware of the situation and will not tolerate statements like Hix-DiSanto’s.

“Derogatory statements and actions against any person, no matter who they are, simply have no place in our culture,” Frost said in an email. “We take these matters very seriously.”

As of now, all of Hix-DiSanto’s social media pages have been removed and she hasn’t made any public statements since her initial interview with the Rapid City Journal.

Inman has reached out to Hix-DiSanto and KW Black Hills for additional comments, and we’ll update the story accordingly.

Why you shouldn't air your political beliefs in real estate 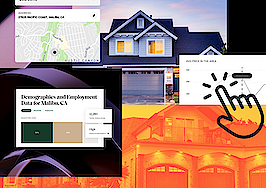 Luxury Presence unveils new lead-generation features
Back to top
Only 3 days left to register for Inman Connect Las Vegas before prices go up! Don't miss the premier event for real estate pros.Register Now ×
Limited Time Offer: Get 1 year of Inman Select for $199SUBSCRIBE×
Inmanpot
Log in
If you created your account with Google or Facebook
Don't have an account?
Create an Account
Forgot your password?
No Problem