Despite the cultural draw of New York, the sun and fun of Florida and the natural wonders of Wyoming and South Dakota, 48 of the 100 best cities to raise kids are Golden State municipalities, according to a new study by the National Council for Home Safety and Security.

San Ramon, a town of 76,000 in Contra Costa County known mostly for its foliage and as the West Coast headquarters of AT&T, topped the list, with five other California locales including Newport Beach, Pleasanton, Livermore, Davis and Yorba Linda rounding out the top 10.

Newton, Massachusetts; Flower Mount, Texas; Cambridge, Massachusetts; and Boulder, Colorado; also made the top 10, according to the NCHSS list of best cities to raise children.

“The weather is nice, the landscapes are beautiful and the public schools are top notch (two of San Ramon’s high schools rank in the top 300 nationally),” according to a summary of the new rankings. “Perhaps you’re thinking, ‘Sure, but that describes a lot of cities on this list.’ That’s true, but its San Ramon’s median family income of $132,339 that tipped the odds in its favor.”

Released Monday, the ranking, according to the organization, was calculated based on the high school graduation rates, crime, insurance enrollment and income levels of 526 U.S. cities.

Absent from the list were great American destinations like New York City, home to nearly 100 museums and a thriving library system, and Portland, a hub for indoor and outdoor playgrounds. In total, 25 states, including Maine, Hawaii, Utah, Vermont and Ohio failed to make the cut.

“The disproportion comes from the US census data,” said Jason Sanders, a spokesperson for the association, a national trade association based in Washington, D.C. comprised of licensed alarm installers and contractors. “They release education, insurance and income data for 600 cities in the US. 138 of 600 are cities in California. Their rank is just the outcome of our analysis, but the disproportion is already in the data, which could be partly explained by the fact that California is the most populated state with 12 percent of the overall population.” 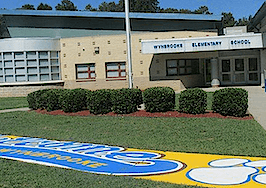