On March 7, this report on realtor.com owner News Corp piqued my interest. Chief Executive Robert Thomson, referring to realtor.com, said, “Obviously we’re in a competition, long term, to be no. 1 …”

On March 7, this report on realtor.com owner News Corp. piqued my interest. Chief Executive Robert Thomson, referring to realtor.com, said, “Obviously we’re in a competition, long term, to be no. 1 …”

Here’s the thing: I don’t think realtor.com is really competing to be no 1.

If we look at the most important metrics, I don’t see evidence that realtor.com is the “fastest growing” in any category. These self-reported traffic metrics are essentially static: Zillow has around three-times the traffic of realtor.com. 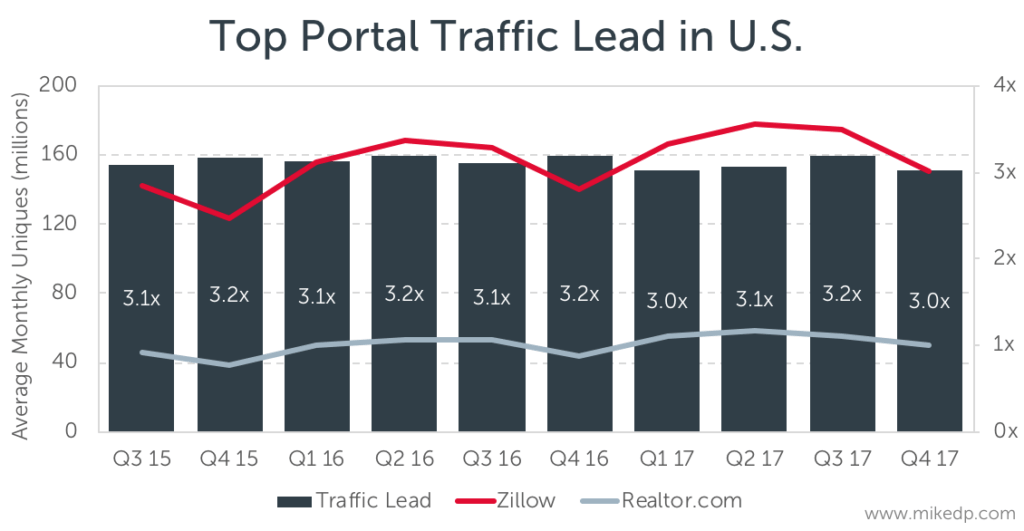 Zillow is growing its revenue (from a larger base) considerably faster than realtor.com. 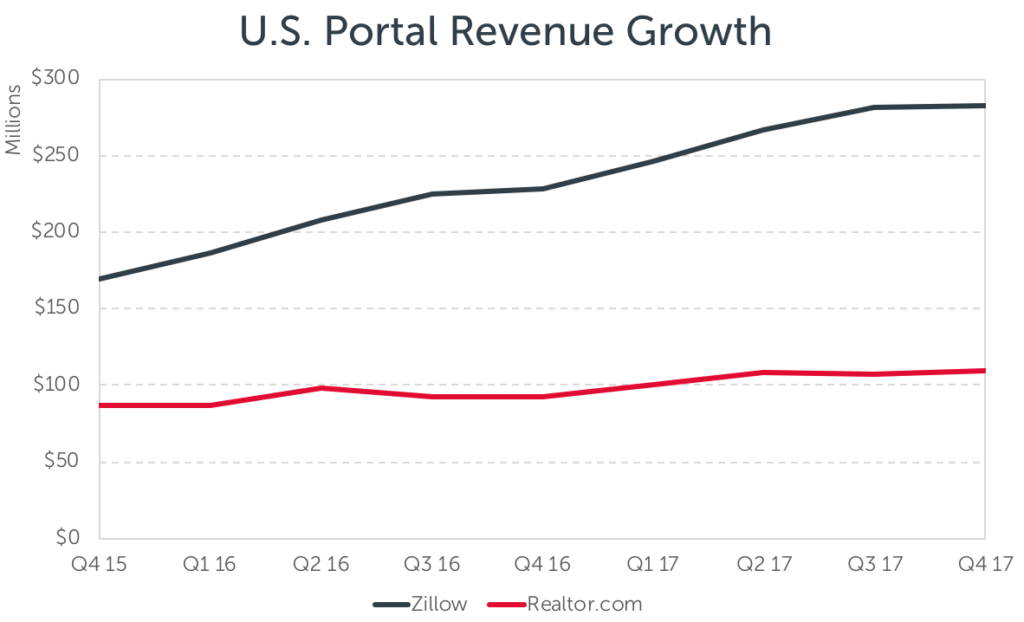 On a quarterly basis, Zillow blows away realtor.com in terms of year-on-year revenue growth (again, from a much higher base). 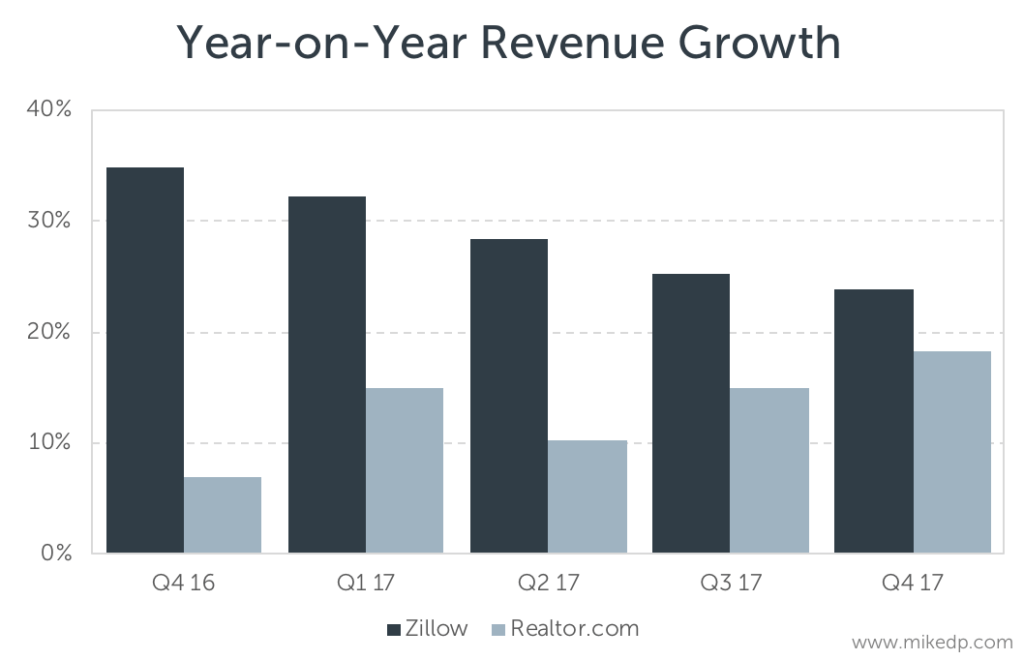 The last chart does show an interesting trend, which is slowing revenue growth at Zillow compared to rising growth at realtor.com. But in absolute terms, during the last quarter, Zillow increased its revenue by $54 million while realtor.com increased by $17 million — a big difference! 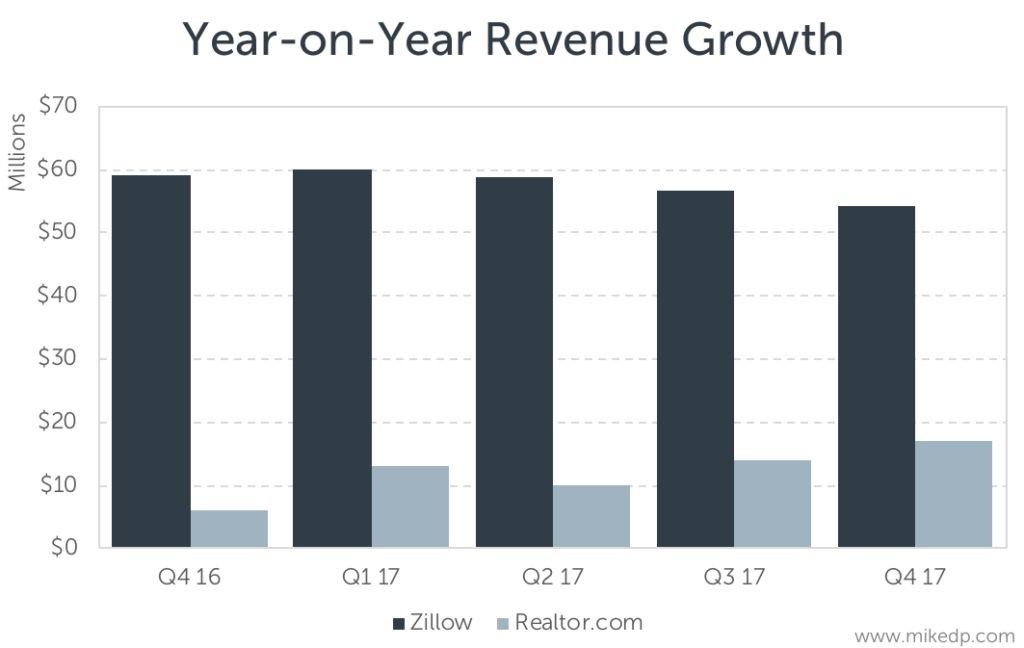 There’s still a lot of distance between the two, but it’s true that realtor.com is trending upward while Zillow’s revenue growth is slowing.

I’m not sure I’d agree that realtor.com is the “fastest growing” in any meaningful metric, but the last three quarters show the start of a promising trend for the business.

If Zillow was genuinely concerned with realtor.com’s growing momentum, I’d expect its sales and marketing expense to increase. If realtor.com’s market share was growing, Zillow would be spending more advertising money in response.

Aside from a slight bump a few quarters ago, Zillow’s sales and marketing expense as a percentage of revenue is relatively flat and trending downward. 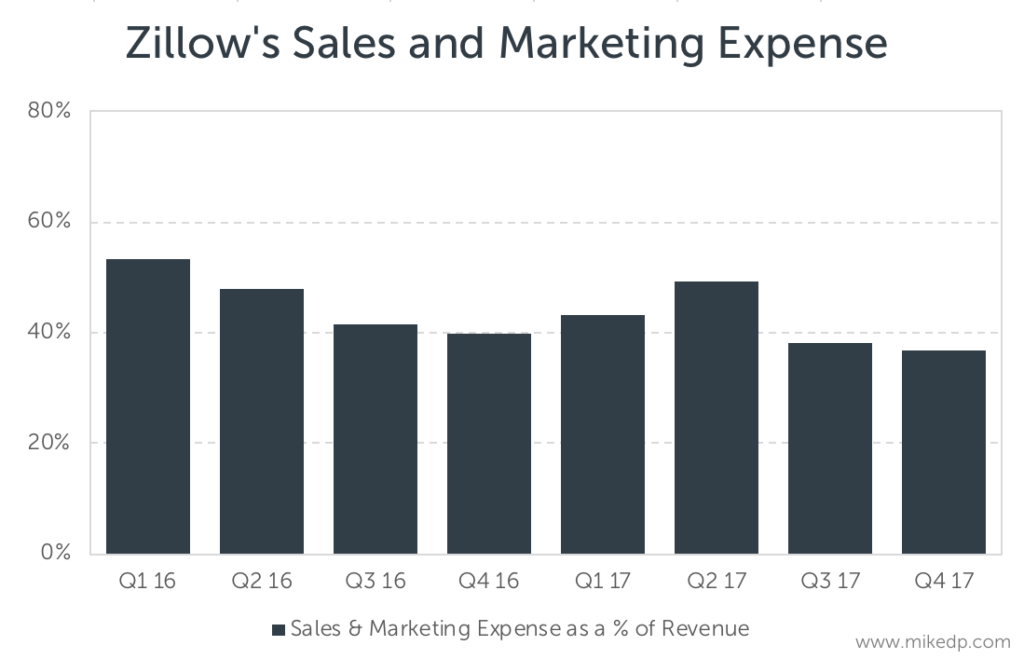 You can’t argue with the fact that realtor.com would like to be the no. 1 portal in the U.S. market. But is it really in a serious competition to be no. 1?

News Corp. has been a major investor in REA Group, the leading portal in Australia, for almost two decades. More than most, it understands the power of network effects and how expensive and futile it can be to unseat a no. 1 player.

So is News Corp. realistically expecting to overtake Zillow in the U.S.? I doubt it.

I believe it’s happy to run slipstream to Zillow and operate a strong, profitable business in its own right, but remain the no. 2 player.

Attempting to overtake Zillow would be incredibly expensive and uncertain, and the resulting marketing war would drain all profits from both companies.

News Corp. would never admit this strategy (who would admit happily being the runner-up?). Being the underdog and striving to overtake the market leader is a great story and good for morale, but it will probably remain just that: a story. 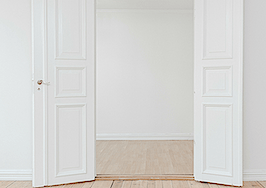 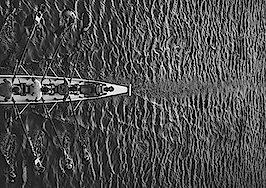