Never anger a canary. Fresh from a $706 million legal win in March against a Quicken Loans affiliate, real estate valuation startup HouseCanary is now going after Quicken Loans directly. The lawsuit marks the latest escalation of a feud between former business partners.

On May 25, San Francisco-based HouseCanary filed a federal lawsuit against Detroit-based mortgage lender Quicken Loans Inc. and its sister companies, One Reverse Mortgage LLC and In-House Realty LLC, alleging misappropriation of trade secrets, breach of contract and conspiracy to commit fraud. The three firms are owned by Rock Holdings Inc.

The lawsuit, filed in the Western District of Texas in San Antonio, alleges the three companies, along with fellow Rock Holdings subsidiary Amrock (formerly Title Source Inc, or TSI), secretly conspired to induce HouseCanary to share its confidential information and intellectual property with them in order to develop competing appraisal products they could use for their own profit, and so that Quicken Loans could rebrand itself as a “data company.”

In an emailed statement to Inman, a Quicken Loans spokesperson said, “We fully expect these frivolous claims, like those that preceded it in California, will be quickly purged from the judicial system.”

HouseCanary first filed suit against the three companies in California in March, but voluntarily dismissed that suit the day it filed this one last month. When asked whether Quicken expects HouseCanary to voluntarily dismiss this one as well, the spokesperson said, “We expect this new case to end quickly and be rightfully purged from the judicial system.”

The new lawsuit comes after a jury awarded HouseCanary $706.2 million from Amrock for misappropriation of trade secrets, fraud and breach of contract that occurred when Amrock was known as Title Source. The jury unanimously agreed with HouseCanary that Title Source failed to honor a software licensing contract and then used HouseCanary’s technology and trade secrets to try to construct its own version.

Title Source initially sued HouseCanary, alleging fraud and breach of contract over the software, but HouseCanary countered and won. Amrock has said it will appeal the verdict.

In the latest complaint, HouseCanary’s attorneys argue that Quicken Loans should also be held liable for Title Source’s misdeeds because the company “has been operated as a mere tool or business conduit of Quicken Loans.” Moreover, the complaint asserts that Title Source/Amrock, Quicken Loans, One Reverse Mortgage and In-House Realty have an express agreement to share services, including valuation services and legal services.

“Specifically, Quicken Loans controls TSI/Amrock so that holding TSI/Amrock solely liable for its debts would result in an injustice. Quicken Loans and TSI/Amrock share legal counsel, and comingle their funds in general and more specifically for paying for valuation services such as those provided by HouseCanary,” the complaint said.

HouseCanary alleges that a non-disclosure agreement signed with Title Source also covered Title Source’s affiliates, including all three defendant companies. That NDA prohibited the companies from reverse-engineering HouseCanary’s models or the output of those models, including automated valuation models (AVMs), or otherwise using HouseCanary’s confidential information to develop their own products, the complaint said.

Without these limitations, HouseCanary’s attorneys said the company would have charged Title Source $10 million per year, rather than the $5 million per year the two companies agreed to.

HouseCanary alleges that Quicken Loans and its affiliates approached HouseCanary with the intention of misappropriating its trade secrets in order to take a “shortcut” and fast-track their own development of valuation software.

“As part of Quicken Loans’ and its family of companies’ aggressive plan to provide consumers with nearly instantaneous loans, it realized it needed more advanced appraisal capabilities including more accurate home valuation technology,” the complaint said.

“Rather than investing its own time and money to build these capabilities, Quicken Loans went another route: it took that technology from HouseCanary — a startup that had worked aggressively to develop innovative and sophisticated technology in this field.”

Title Source’s decision to sue HouseCanary in April 2016 and refuse to pay the startup was an attempt to deprive the startup of funds while the companies developed their own product, according to the complaint.

In February 2018, Title Source announced a rebrand to Amrock, a “leading-edge” provider of fintech services. In April, Dan Gilbert, Quicken Loans founder and chairman declared, “We’re not really in the mortgage business. We’re in the data acquisition business. We acquire data, we curate it, and we move it. That’s all we do.”

The complaint said that Gilbert omitted “that Amrock and Defendants are not lawfully acquiring data, and they are not ‘curating’  that data themselves. Contrary to Quicken Loans’ claim that it had ‘created’ its home valuation tool, this technology was lifted from the hard work and technological insight of HouseCanary.”

The complaint alleged HouseCanary had incurred “substantial damages” but did not specify an amount, saying that would be determined at trial.

HouseCanary declined to comment for this story, citing pending litigation. 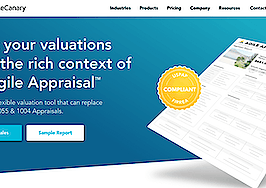 Rocket promotes from within, names new CFO and general counsel
Back to top
Only 3 days left to register for Inman Connect Las Vegas before prices go up! Don't miss the premier event for real estate pros.Register Now ×
Limited Time Offer: Get 1 year of Inman Select for $199SUBSCRIBE×
Inmanpot
Log in
If you created your account with Google or Facebook
Don't have an account?
Create an Account
Forgot your password?
No Problem