Bret Calltharp, a 15-year real estate veteran and most recently with BHGRE, has been chosen as Zillow’s next director of industry outreach.

In February, Zillow’s longtime director of industry outreach Jay Thompson announced his retirement via a heartfelt blog post, saying that he wanted to retire while he was “young and spry enough” to enjoy life with his two children and his wife, Francy.

“The simple reason for retiring now is it’s just that time,” he said. “We are financially secure, we have places we want to see, friends and family we want to visit, and things to do. Francy and I have been married almost 27 years. I’ve spent a significant chunk of that time working, growing a real estate business, working, building a brokerage, working, employed by Zillow, and working some more.”

While professionals across the industry made bittersweet goodbyes to Thompson, thanking him for his class, candor, and cutting-edge approach, everyone also wondered: “Who’s next?”

Well, we finally have the answer.

Bret Calltharp, a 15-year real estate veteran and most recently the director of consulting and special projects for Better Homes and Gardens Real Estate, has been chosen as Zillow’s next director of industry outreach.

“It’s a real pleasure, and honestly, it’s a little surreal to be joining this incredible team,” Calltharp, who is a self-described Star Wars aficionado and goes by the handle “@jedirealestate” on social media, told Inman.

Calltharp understands he has some big shoes to fill, but he’s ready to make the position his own by using his experiences from BHGRE and Re/Max to educate brokers and agents about the strategies, techniques and opportunities that will take their business to the next level.

“I think the common thread, that I’ve had throughout my career is that I love working with agents and brokers to help them improve their business,” he said. “I’ve had the opportunity to work with thousands of agents across multiple countries, and the commonality is that a good real estate professional is a facilitator and educator, and I think that’s going to be the same approach I take here.”

Although Calltharp is excited to take the reigns and begin building on the foundation Thompson built, he’s also aware of the struggles that lie ahead in representing a company that has drawn ire and controversy from the industry. He says he was able to talk to his predecessor who gave him one simple piece of advice.

“Jay’s best advice was to just be yourself,” Calltharp said, noting that authenticity has been the guiding principle behind his career, his brand and his relationships.

“I learned a long time ago the more myself I was on social media, geekiness and all, that’s what will help me to build relationships,” he said. “I am who I am, and authenticity is a big thing for me. I haven’t gotten a memo on my desk that I have to change [now that I work for Zillow.] There’s a lot of people with great personalities here.”

Finally, Calltharp says he’s allowing his almost fifteen years working with agents and brokers to be a constant reminder of who else he’s working for.

“I definitely always have the agent in my head reminding me these are independent contractors who wake up every day, and they’re out working hard,” he said. “So, I’m going to attack [this role] from the same position.” 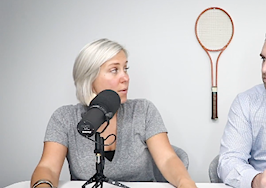 The Real Word: Does Zillow's plan for the future make sense?