On Sept. 26, Sen. Elizabeth Warren introduced the American Housing and Mobility Act, which aims to close the supply-demand imbalance by 2028. Will it work?

Senator Elizabeth Warren (D-MA) is tackling the affordable housing crisis as she teases a 2020 presidential run. On Sept. 26, she introduced the American Housing and Mobility Act, which aims to close the supply-demand imbalance by 2028, add 1.5 million new jobs to the market, and decrease rents for low-and-middle income families by 10 percent — all without a long-term deficit impact.

“Housing is the biggest expense for most working families – and costs for everyone, everywhere are skyrocketing,” said Warren. “Rural housing is falling apart and decades of discrimination has excluded generations of black families from homeownership. My bill would cut rents by 10 percent and give families in urban, rural, and suburban communities more economic security.”

“This proposal will attack the rising cost of housing by helping to roll back needlessly restrictive local zoning rules and taking down other barriers that keep American families from living in neighborhoods with good jobs and good schools,” she added. “After bungling housing policy for decades, it’s time for Congress to make things right and pass my bill.”

Here’s what Warren proposes in the Act:

Beyond pushing money into these funds, initiatives, and programs, Warren also proposes expanding the Fair Housing Act to outlaw discrimination on the basis of sexual orientation, gender identity, marital status, and source of income.

Moody’s Analytics Chief Economist Mark Zandi said, if passed, the American Housing and Mobility Act could increase affordable housing starts by 200,000 in 2019, 250,000 in 2020, and 300,000 in 2021 — some much-needed aid for buyers battling rising interest rates and skyrocketing home prices.

“If this legislation is signed into law soon, it will at the very least ensure that the current crisis in affordable housing does not get worse,” Zandi wrote in his report. “This will still leave a shortfall in affordable housing. But market forces should work to slowly and steadily increase supply.”

“This is particularly true if the American Housing and Economic Mobility Act eases regulatory restrictions on affordable homebuilding as anticipated,” he added. “By the end of the 10-year horizon, affordable housing supply should be approximately equal to demand.”

Edward Pinto, president of the American Enterprise Institute Center on Housing Markets and Finance, a non-partisan think tank, isn’t convinced Warren’s plan will work. Pinto told Inman the proposal is a repeat of past, failed housing reform bills that also relied on subsidies.

Plus, he says Warren’s bill will likely cost $700 billion, $200 billion more than the $500 billion budget outlined in the Act. The extra $200 billion is comprised of $80 billion in upfront development subsidies on Low Income Housing Tax Credit developments, and another $100 billion in operational subsidies for 1.1 million units over 10 years ($9k/year/unit).

“Spending additional hundreds of billions on subsidies is not the solution,” he said. It is incredibly costly and, given past history, not only has a low chance of success, but a considerable chance of failure.”

“There is a much more cost effective alternative: the Low-Income, First-Time Homebuyer Tax Credit (LIFT Home). It is a fairer, more efficient home-ownership subsidy that is designed to build wealth and result in lower default risk,” Pinto said. “It is transparent, targeted, and on-budget. It is refundable and advanceable, and applied upfront to make loans less risky.”

National Association of Realtors President Elizabeth Mendenhall said the trade organization is still reviewing the full text of the bill and has concerns about how the bill will be funded, which is by increasing maximum estate tax rates and reducing the basic exclusion amount to $3.5 million.

“We thank Senator Warren for continuing conversations regarding the availability of affordable housing options in America,” she said in an emailed statement to Inman. “NAR is reviewing the full text of this bill, but our initial concerns center around the funding sources proposed by Senator Warren.”

“We will continue to evaluate the legislation and its impact on housing inventory and affordability over the coming days and weeks, and remain committed to the goals of affordable housing and looking at the best way to achieve them.” 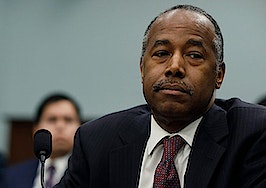