Joe Neric on Unsplash
by Mike DelPrete
Share this article
You successfully shared the article.
Close

Republished with permission from Mike DelPrete.

Why it matters: Zillow benefits from practically unbeatable network effects in the consumer space. Both of these moves ignore basic strategic principles of playing to your strengths and picking battles you can win.

In his best-selling book Zero to One, Peter Thiel provides an elegant definition of network effects: “Network effects makes a product more useful as more people use it. For example, if all your friends are on Facebook, it makes sense for you to join Facebook, too.”

Online marketplaces such as Craigslist, LinkedIn and eBay are classic examples of businesses that benefit from network effects. The more buyers and sellers use them, the more valuable the service becomes.

Businesses that have the benefit of network effects are incredibly difficult to displace. As Tren Griffin writes on a16z, “Nothing scales as well as a software business, and nothing creates a moat for that business more effectively than network effects.”

Zillow benefits from the power of network effects. By developing the most popular means of searching for real estate, it attracts buyers and sellers in a virtuous cycle. It has cemented an incredibly strong position with a near-impenetrable moat from competition. This is Zillow’s key strength.

But as I’ve shown in the past, Zillow’s ever-important traffic dominance remains constant, undisturbed by realtor.com or anyone else. 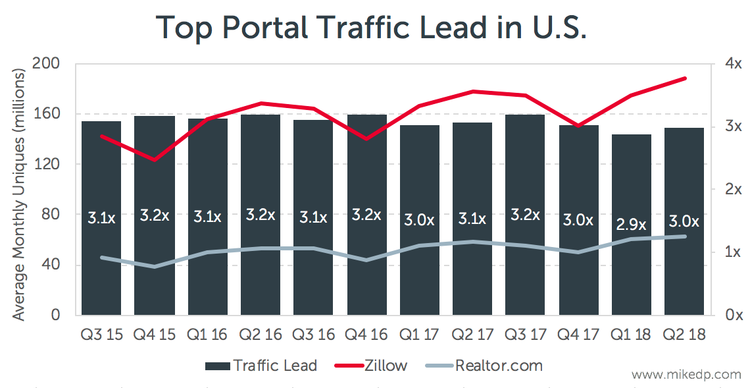 If anyone could dislodge Zillow’s dominance, it would be realtor.com. But it hasn’t; not for lack of trying, but rather an understanding of network effects and the futility of such an effort. (Remember, it owns the top portal in Australia and knows the power of network effects better than most). News Corp doesn’t want to overtake Zillow because it knows it’s impossible.

Strategy basics: Play to your strengths

Sound strategic planning requires two key elements: leveraging your strengths and playing where you can win.

A business should build its strategy around an understanding of its key competitive advantages and operational strengths. Those strengths should be applied in areas where it can win (typically where its competitors are weak).

To illustrate this point further, the following chart looks at four examples of Zillow and realtor.com smartly leveraging their strengths and exploiting their competitor’s weaknesses.

Less experienced strategists can be reactionary. They see a threat and attempt to counter it, on a battlefield where they are at a distinct disadvantage to a competitor. Keller Williams and Rocket Homes have done just this; choosing to do battle with Zillow on its home turf, where it is strong and they are weak.

Zillow’s strength lies in its massive consumer reach through its search portal. This business benefits from strong network effects and has a wide moat to protect it from competition.

Keller Williams is building a new consumer-facing app to “compete directly with search giants like Zillow and Redfin.” Rocket Homes is launching a portal to “rival Zillow,” which will “let consumers search for homes and apply for loans.”

In their efforts to build end-to-end homebuying platforms, both businesses have decided to go from positions of strength (mortgages and agent reach) to ones of weakness (consumer listing portal). It’s the most difficult battle possible.

What Rocket Homes and Keller Williams are missing in their end-to-end platforms — the consumer search portal — is nearly impossible to deliver because of Zillow’s dominance and the power of network effects. There’s a certain futility in going after Zillow (or Facebook, or eBay, or Craigslist).

All businesses should know their strengths. Deeply understand your competitive advantage and what value you offer — and focus on that.

By going directly after Zillow, Keller Williams and Rocket Homes demonstrate a fundamental misunderstanding of the power of network effects. There’s simply no purpose for these new consumer portals to exist because they don’t meaningfully benefit consumers.

In the accelerating race to build end-to-end real estate ecosystems, businesses should focus on leveraging their strengths to gain advantage over competitors and deliver true value to consumers. 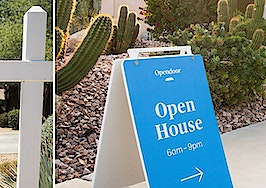