Rawpixel on Unsplash
by Veronika Bondarenko
Share this article
You successfully shared the article.
Close

In each of the incidents, the women’s names and contact information may have been plucked from online lead generation sites, according to the Realtors Association of Southeastern Massachusetts in a statement sent to members.

“Knew it was a spam but called the number back. This happened to someone else,” wrote Dawn Vicari Devlin, an instructor at the Agent Rising Real Estate Training School in southeastern Massachusetts who received one of the calls early last week. “Looks like I will be filing an FBI report.”

The calls were scams, Jonathan Darling, the public information officer for the Bristol County Sheriff’s Office, told Inman. The perpetrators were using technology to block the number and show it as ‘Sheriff’s Office’ while also identifying themselves as officers actually working at the department.

“We hear about those kinds of scam calls that go on from time to time, but this was the first time that we heard of scammers using our caller ID number and identifying themselves as specific people from the sheriff’s office,” Darling said. “They must have gone online and gotten some of the names of our employees.”

The calls and texts appeared to target female agents, in particular. After several agents reported receiving similar messages, the Realtors Association of Southeastern Massachusetts sent an email alerting members of the scam, adding that they believed the woman’s names were culled from lead generation sites.

“It has come to the association’s attention that someone is targeting female real estate agents in the Southeastern Massachusetts area and is trying to start-up a conversations with them, AND in multiple instances, tried to setup a private meeting,” reads the email, which Devlin reposted on Facebook. “In two cases, the Realtor received a text message from their Broker asking them to ‘chat,’ but the number was spoofed and the broker had not contacted that agent.” 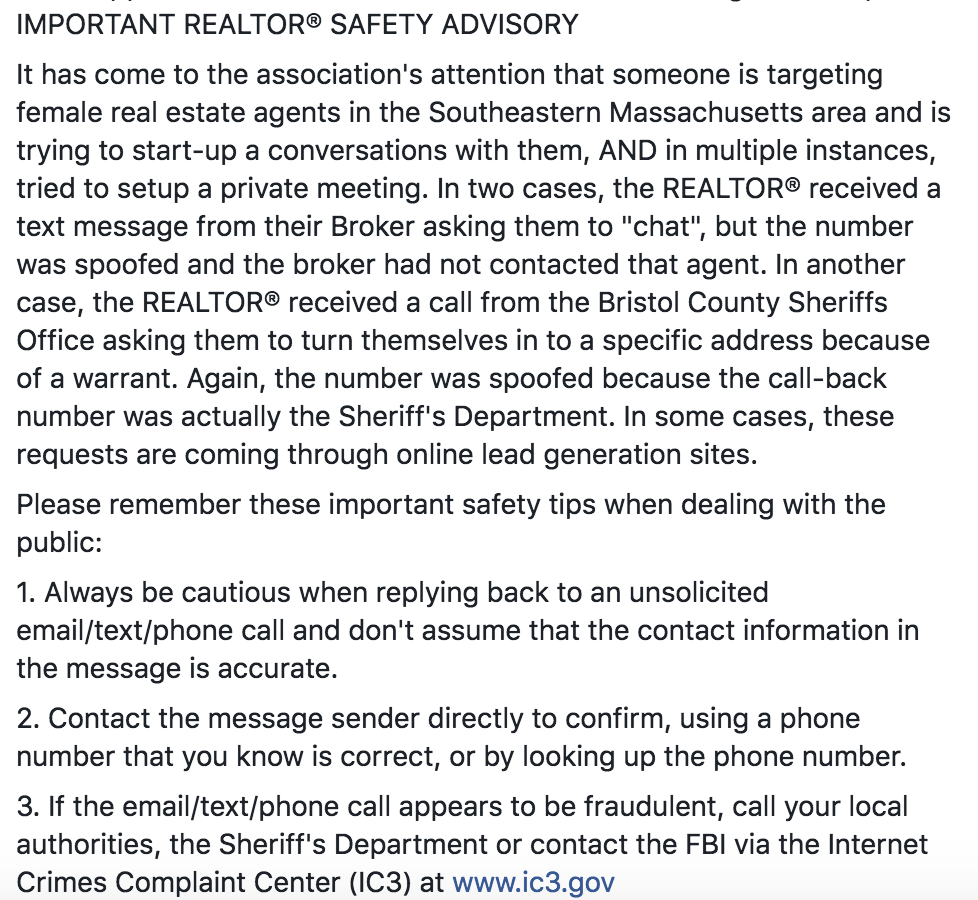 The sheriff’s office has passed these reports on to the local police precinct, which is currently investigating the situation. They are advising anyone who receives such a call to take down the number, call the office and have them confirm that it was a scam.

“We never call people and ask for money over the phone,” Darling said, adding that any real transaction is presented by an officer in a uniform and with a badge. “But I can see how people would be confused. It’s very scary to get a call whose caller ID says ‘Sheriff’s Office.'”

Darling said he did not know why the scammers targeted real estate agents, or female professionals in particular. Although numerous real estate-related scams have been circulating online over the past few years, this one is unusual in that it appears to target female agents specifically.

“I don’t know why they’re targeting real estate professionals unless these scammers think that that’s they’re the ones who will buy into scams,” Darling said.