More than 4 in 10 consumers believe real estate commissions are too high, according to a study from real estate technology startup ShelterZoom.

More than 4 in 10 consumers believe real estate commissions are too high, according to a study from real estate technology startup ShelterZoom.

ShelterZoom hired market research firm Propeller Insights to survey more than 1,000 U.S. adult consumers about what they think of the homebuying and selling process. The results indicated a lack of trust in a process that many consumers consider opaque at best, though admittedly the survey is being presented by a company that promotes streamlining that experience.

“Perhaps the survey’s least surprising finding was the widespread unhappiness with the home buying process,” ShelterZoom co-founder Allen Alishahi wrote in a blog post the company will publish next week.

“[T]he survey makes it clear that consumers are frustrated with the obstacles that, until recently, have been an unavoidable part of the buying and selling processes,” he added. 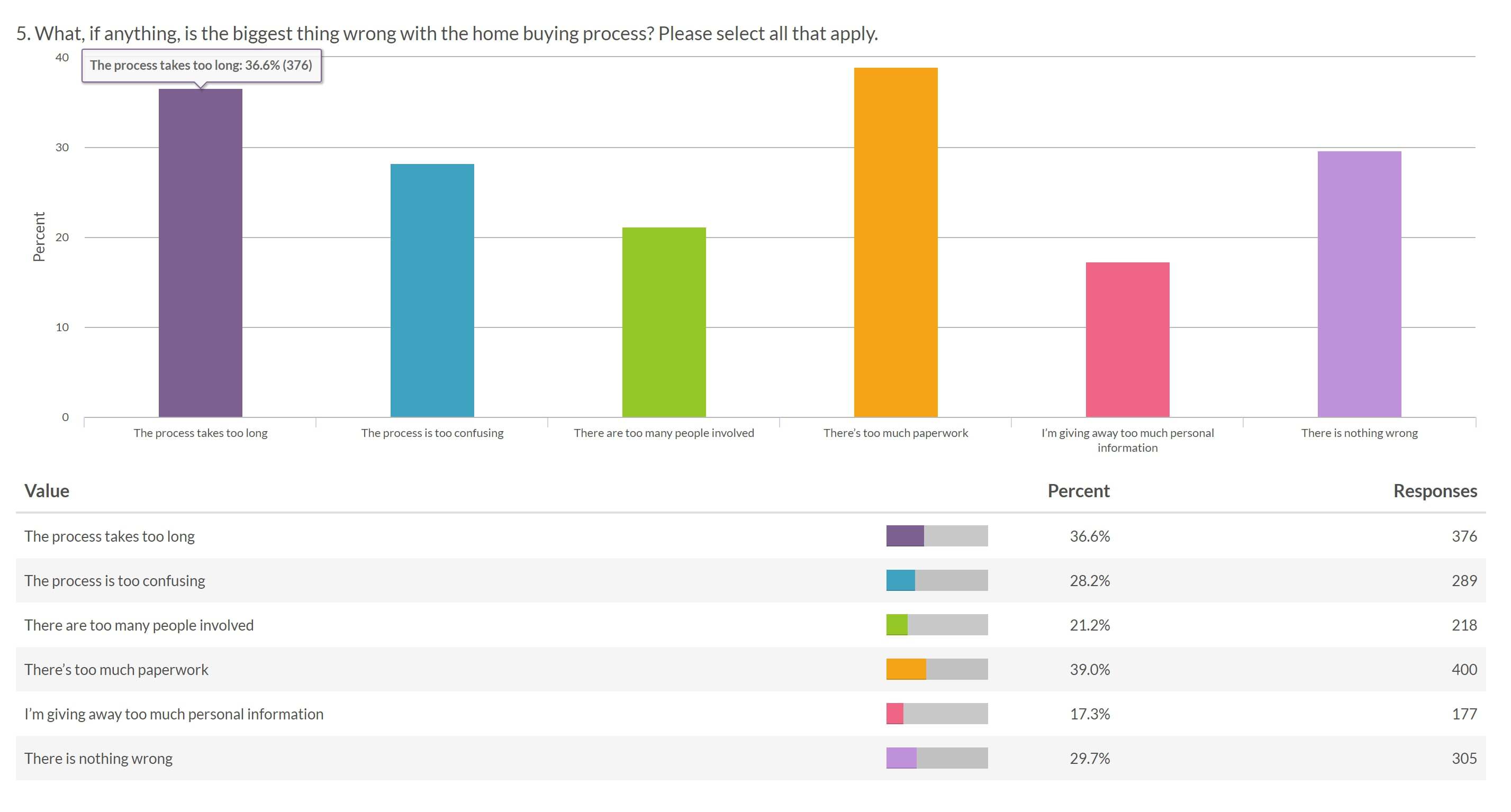 There was no “Other” option for this question.

When asked about specific concerns, “Commissions are too high” was the biggest concern, cited by 42.7 percent of respondents. This finding comes as commissions are under scrutiny from multiple fronts, including lawsuits and an investigation by the U.S. Department of Justice (DOJ). 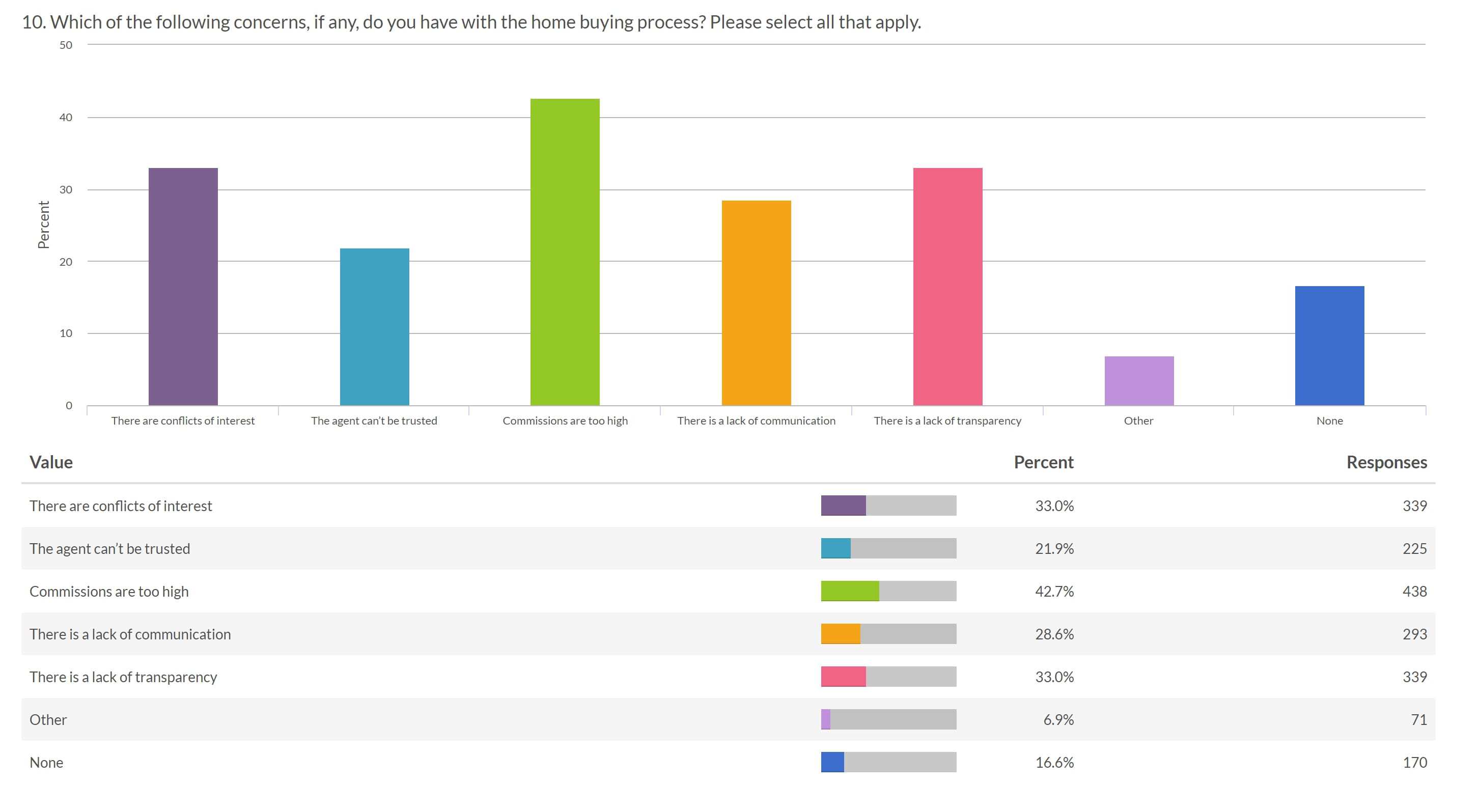 When asked what was meant by “conflicts of interest,” ShelterZoom said respondents were not given an explanation, but that the company had these scenarios in mind when considering this answer choice:

Just under 17 percent of respondents said they didn’t have concerns with the homebuying process.

“I’m not that surprised by these findings, as they have been concerns for as long as I’ve been in the business,” Alishahi wrote. “But I will add that so much depends on the real estate professional you’re dealing with.”

“As with any profession, many are fantastic and truly take the customer’s concerns seriously and do whatever they can to alleviate them. Others don’t.”

When the survey dug into what takes too long about the process, more than a third cited getting a mortgage approved (43.8 percent), signing and completing contracts (35.7 precent) and too many people involved in the process (33.8 percent). Only 1 in 10 respondents didn’t think the process takes too long. 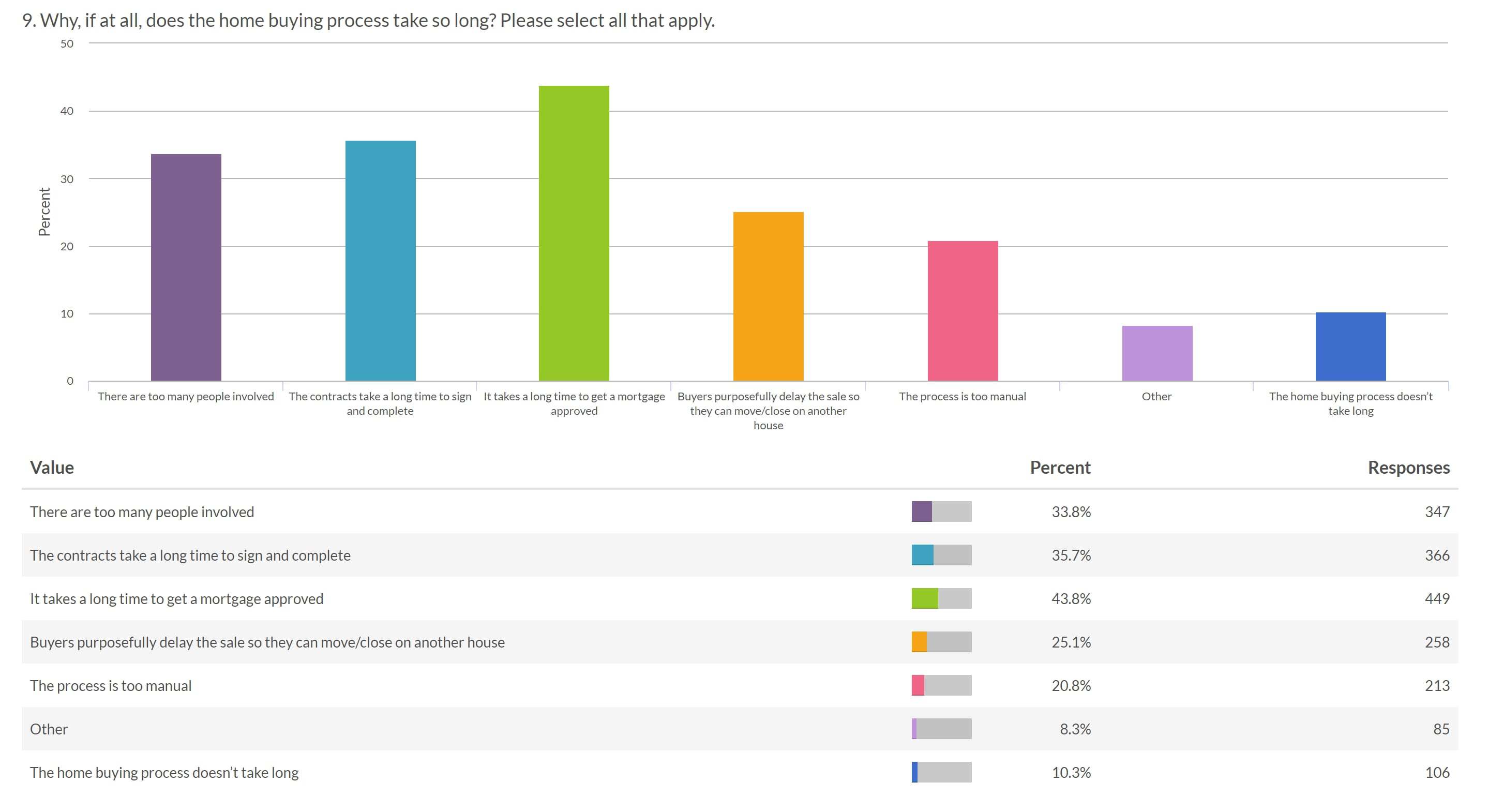 “When you consider how fast everything moves these days — thanks in large part to technology — and how short attention spans and expectation spans have gotten as a result, the home buying and selling processes are even more of an anachronism than they were just a few years ago,” Alishahi wrote.

More than 4 in 10 respondents considered three of those ideas improvements:

Regarding the homeselling process, the survey found that the vast majority of respondents (76.2 percent) would be willing to lower the price of their home if it meant not having to deal with the costs associated with homebuying such as agent commissions, lawyers, home repairs, and closing costs.

“[The home selling process is] so unpleasant that most respondents would leave money on the table to avoid as much of it as possible,” Alishahi wrote. 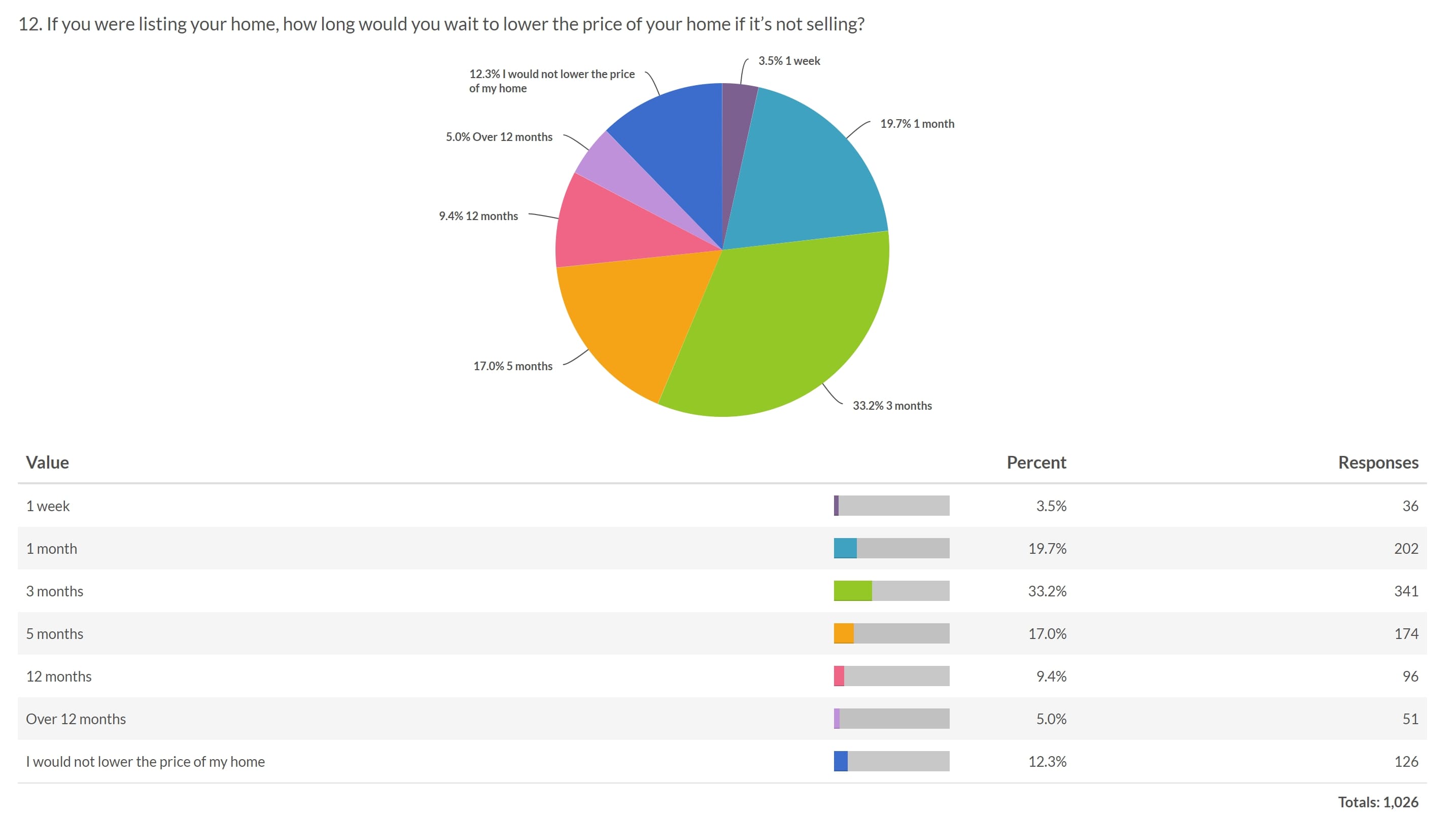 ShelterZoom noted that iBuyers — technology platforms that make automated cash offers on homes — are on the rise, but said that the survey results point to consumers valuing ShelterZoom’s platform rather than “the more bare bones and limited iBuyer model.”

Asked to elaborate, the company pointed to 92 percent of younger millennials using buyer’s agents, per a National Association of Realtors survey.

“Buyer’s agency isn’t going away as homebuyers still rely on the industry knowledge, market knowledge, negotiating skills, and other value that agents can offer,”  a ShelterZoom spokesperson told Inman via email.

“ShelterZoom provides the same types of tools as iBuyer platforms, using better technology, and delivers them to those providing that value. The buyers and sellers are ultimately the beneficiary of the platforms and it empowers agents to better meet their needs.”

The company’s upcoming blog post about the survey promotes ShelterZoom’s platform. Asked about the survey’s value beyond that, the spokesperson said, “Understanding market trends in a space that is now constantly evolving is paramount to the very innovation that drives change. There are brokerages out there country-wide that are still utilizing fax machines and that has become a hinderance to home buyers and sellers that need guidance but still demand a better process.

“By sharing our findings, so many different verticals can benefit by tailoring their products and services to better meet the needs of consumers in 2019 and beyond. This is especially true for an industry that remains mostly fragmented and slow to adapt to change.”

ShelterZoom survey methodology: A national online survey of 1,026 US consumers, ages 18+ was conducted by Propeller Insights on behalf of ShelterZoom, between May 10th and May 12th, 2019. Survey responses were nationally representative to the U.S. population for age, gender, region and ethnicity. The maximum margin of sampling error was +/- 3 percentage points with a 95 percent level of confidence. 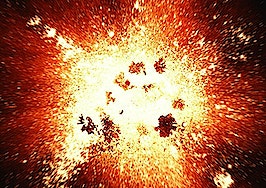 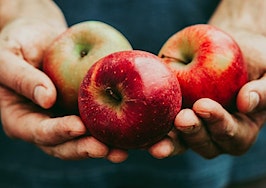 How to cope with iBuyers in your market 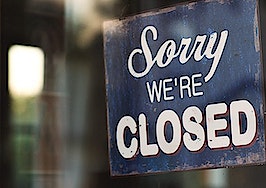 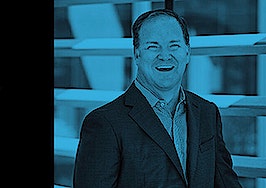