In 2018, 6,284 wildfires engulfed California and destroyed more than 800,000 acres of land, leveled more than 22,000 structures, and, most devastatingly, took the lives of 103 civilians and firefighters. The Mendocino, Camp, Carr and Woolsey fires were the most ferocious, blazing their trails for weeks at a time from August to November.

The real estate industry quickly rallied around their communities, offering help to neighbors who lost their life’s possessions in a matter of hours. And alongside the very people they helped sell or purchase a new home, many real estate professionals lost their homes as well, as detailed in a series of stories published by Inman.

Although its been nearly a year since the devastation took place, many are still rebuilding their lives.

That’s why Zillow and Giveback Homes have partnered to create a disaster relief fund, which will provide $40,000 in aid to real estate professionals affected by the California wildfires. The campaign launched on July 29 with a $10,000 donation from Zillow, and a promise from the real estate giant to match every donation up to $20,000.

“When unexpected disasters like hurricanes and wildfires occur, families are uprooted and housing stability can be wiped away in the blink of an eye,” said Zillow VP of Government Relations and Public Affairs Racquel Russell in a statement. “Zillow believes it’s important to support the agents, brokers, and real estate community we work alongside – which is why we’re proud to partner with Giveback Homes on our Disaster Relief Fund.”

Within a week, Zillow and Giveback Homes has raised $10,447, all of which will go towards providing families with refrigerators, washers, dryers, mattresses, and gift cards that can be used to buy other essentials. So far, the fund has helped three families who lost their homes during the Camp Fire.

“My home in Old Magalia burned down. We lost 100 percent of our belongings other than the clothes we had on our backs,” said Tammy Spirlock in a video as she stood on the charred lot where her home once stood. “After a fire like this, people don’t know what to say to you, so a lot of them say, ‘you have your life, the rest of it is just stuff.’ Unfortunately, it was my stuff. It was 30 years of stuff that I collected, that is attached to memories.”

The fund will provide Spirlock and her two children with a new washer and dryer. The fund also helped Kelly Kissman’s family afford one month’s rent while they rebuild, and provided Mike Richards and his wife with a new refrigerator similar to the one he bought for her right before the fires.

Giveback Homes co-founder Caroline Pinal says most of the requests for help have come from families impacted from the Camp Fire, but that anyone in the industry affected by the fires can nominate themselves or someone they know by filing out a simple form that asks for contact information and their needs.

Pinal says they’re able to fulfill requests within a month, but fulfillment times will depend on the family’s individual situation. “For example, two of the families received the items within the month, and one family is waiting until they move into a permanent home before we deliver a new refrigerator,” she explained.

With the height of the hurricane season looming, Pinal knows that more help will be needed. She says Zillow and her team are focused on raising the $40,000 needed to help fire victims, but that they are on standby to help if another Hurricane Harvey or Michael should arise.

“The goal is for this initial $40,000 to serve as a foundation or starting point, and when the next disaster strikes, we will be able to help and raise funds more efficiently,” she said. “[But] we need more donations to make that possible.”

“We developed this fund so that we can have ongoing efforts and respond more efficiently when there is a need. After a disaster happens, people want to donate and they want to know it’s going make a direct impact,” Pinal added.

“Our goal is to be able to provide that channel for both donors and recipients,” she continued. “I would love to see more companies within the real estate industry step up and make a donation to this fund so that we can continue helping our community of agents who have lost their homes.”

A Realtor’s guide to helping during a disaster 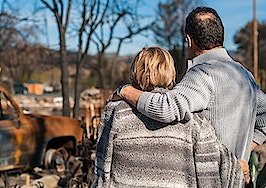