The slowing global economy is not the fault of the central banks, and it’s beyond their repair. Global markets are slowing down for natural reasons, but we might be able to do something about the “unnatural” reasons: Predatory trade policies from the Chinese and the U.S.’s clumsy retaliation is worse than the initial injury.

Markets in the last week have added at least one more Fed rate cut than just one week ago, and all U.S. interest rates are poised to make run to all-time lows. We can say this with authority because the 2-year Treasury note fell to a three-year low at 1.41 percent just since Tuesday’s 1.66 percent.

(Always watch the 2-year Treasury notes to forecast the the Federal Reserve’s moves, not the media-darling Fed funds futures market, more often wrong than right. A 2-year security is very short-term and can’t diverge from the overnight cost of money for long.)

Long-term rates behave differently, but they are also front-running the Federal Reserve. The 10-year Treasury note plunked to 1.52 percent Friday down from 1.75 percent last Tuesday.

Mortgages are trailing as usual but back under 4 percent. Watch the 10-year Treasury notes. To maintain the stair-step decline which began last November, those notes will soon need to break 1.46 percent.

Is this swift change in psychology justified?

The market pattern during the entire 11-month rate descent has been U.S. rates pulled down by economic weakness and rate drops overseas. The pull-down had been grudging because there has been no evident contagion from overseas to the U.S. economy. This week for the first time, we have a collection of slowing reports.

The twin Institute for Supply Management surveys underperformed — especially manufacturing, as we would expect under global influence, but is now joined by a sliding service sector.

The September PMI at 47.8 percent is down 1.3 percentage points from August (50 is break even).

“Comments from the panel reflect a continuing decrease in business confidence. September was the second consecutive month of PMI contraction, at a faster rate compared to August,” said Timothy R. Fiore, chair of the Institute for Supply Management. “Global trade remains the most significant issue, as demonstrated by the contraction in new export orders that began in July 2019. Overall, sentiment this month remains cautious regarding near-term growth.”

Friday’s job numbers from September were OK, including upward revisions for prior months, but the media says doom-on-the-doorstep. The one weak aspect: No growth in wages, but that’s just one month’s set of data, which means that this isn’t necessarily a trend.

There is no recession in these numbers, but they indicate a slowdown. Nor is there linkage to the troubles in the outside world: The newest trade figures are from August, but our imports and exports have hardly budged.

The only real change: A decline in imports from China, substitution to buying from other exporters clearly underway as no change in aggregate imports.

There is no particular new deterioration overseas, no new lower rates. Stress is clear: Japan tried to raise the negative rates on its 10-year bonds and failed. The markets are too worried and not helped by the increased sales tax there. Europe is in Wolkenkuckucksheim (cloud-cuckoo-land), ignoring its own unsustainabilities in favor of keeping Britain a vassal.

Most agree that impeachment is not moving markets.

The top of three years of Federal Reserve interest rate hikes was 2.5 percent. If this economy is headed for trouble, is a cut to 1 percent going to save it?

Mortgage rates are already down 1.5 percent from peak and a half-percent from the all-time low. Who is to benefit? Consensus: More cuts will help stocks by chasing money from cash and eliminating fear of hikes.

The opponents of cuts at the Federal Reserve are worried about asset bubbles, and about stocks in particular. Pass the poison all the way around the circle. If the economy softens more, cut some more and then resume quantitive easing (QE)? The effectiveness of that is questionable. Should the administration go the fiscal route and spend some more?

We’re at $1 trillion deficit now, the sugar-high of unproductive tax cuts all gone. How about $2 trillion and the Federal Reserve buys the paper? A boost, sure, but what part is sustainable? The one sure way to boost U.S. GDP is immigration: A direct add — more people, more economic production. But that’s unlikely to happen.

Take solace in heresy: The slowing global economy is not the fault of the central banks and is beyond their repair. Global markets are slowing down for natural reasons (the aging global population and declining birth rates in the industrialized world).

But we might be able to do something about the “unnatural” reasons: Predatory trade policies from the Chinese and the U.S.’s clumsy retaliation is worse than the initial injury. Global trade is the golden goose, and we’d be better to tend it than disassemble it. There is no global Federal Reserve, and we’re probably better off without one and with flexible currencies to match our cultures.

We do have excellent machinery for managing global trade, but using it requires leaders and polities to get off the grandstands and quietly make trades on trade.

It can be done!

The 10-year Treasury note in the last year. The descending tops and bottoms align in a perfect channel, which will continue until it doesn’t, just like always. The slightest further U.S. softening, and this one will continue down.

The Fed funds rate changes in this cycle, about to come down faster than they went up. 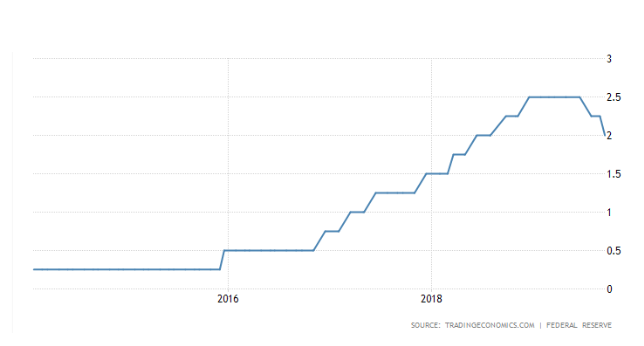 The Atlanta GDP Tracker is current through Friday’s data, and nothing to panic about. Markets are panicky about what’s next. 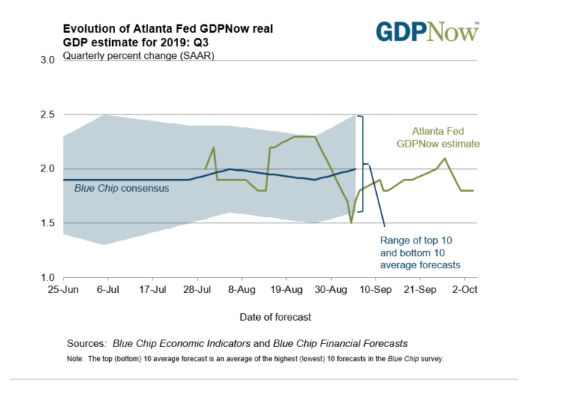