The forecast for interest rates is still low, reinforced by new information from the Federal Reserve.

We have interest rate and Federal Reserve Bank surprises, but it’s been lost among the political headlines.

Long-term rates have jumped in the past 48 hours on hopes for a trade deal with China (which may be aided by all of that other hoo-ha) and even a Brexit deal.

The jump has several lessons about who pushes which buttons in which credit markets and with what consequences for real estate. Ten-year Treasury bonds paid 1.58 percent on Wednesday night, but now they’re at 1.75 percent and barely holding on. The Fed-sensitive 2-year Treasury note rose about the same, to 1.58 percent from 1.41 percent, but mortgages moved hardly at all, from a hair under 4 percent to 4 percent.

Who is in charge here? The big rate decline since the beginning of August has had foreign fingerprints throughout, and frightened foreign money typically goes to Treasurys, not to our weird mortgage-backed securities.

The trade-tariff shootout has had much more damaging effect overseas than here, so with hopes for a trade deal overseas buyers, dumped Treasurys and did little harm to mortgages.

Another point of confirming data: Since Wednesday long-term rates fell all over the world — the German 10-year Bund (their name for their federal government bond) was negative 0.59 percent on Wednesday and now negative 0.43 percent.

The 2-year Treasury note is not affected by overseas panic. Its unwinding upward in the past two days reflects everybody’s money resetting wagers on future Federal Reserve rate cuts. New consensus: Maybe two by the end of winter, not three.

However, in times of international upset the spread widens and may also be affected by the Federal Reserve’s unwinding of MBS bought during wuantitative easing.

The MBS market has to do without bigger, constant bidding by the Federal Reserve, possibly widening the 10-year Treasury/MBS spread, closer to 2.2 percent going forward.

The forecast for interest rates is still low, reinforced by new information from the Federal Reserve this week but largely overlooked. This news has been crowded out by that other stuff, and the media is focused on the Federal Reserve’s internal divide between doves and hawks.

The deeper Federal Reserve news came in two pieces. First, the minutes from the Federal Reserve’s September meeting. All of us try to conceal priorities from time to time but slip and reveal them by accident.

The minutes are 13 pages of text. All but the first page are devoted to the dove-hawk debate. That opening page for the first time in memory focuses on policy options if the Fed gets caught at zero again, the “effective lower bound,” ELB in Fed-ese.

This first page has a dozen ELB notations. If the zero-trap is the first-page priority, perhaps it is the Fed’s deepest concern and reason to keep policy on the easy side.

Then, supporting the thought of tilt-to-ease: Federal Reserve Chairman Jerome Powell spoke on Tuesday at a convention of economists. These rubber-chicken lunch affairs, just a few weeks ahead of a Federal Reserve meeting, rarely tip the chairman’s hand.

Coverage was appropriately routine and focused on the top issues: The effects of trade war and the Federal Reserve’s work to smooth short-term financial market lending. The media missed something important.

Powell, while having his ankle chewed by the president as never since LBJ, is quietly bringing change to Federal Reserve thinking, change as big as any of his predecessors.

One year ago, masked by communications error while still learning that job, Powell made clear his exhaustion with the Federal Reserve’s focus on overheating job markets. That preoccupation (Phillips Curve) had broken down as an inflation-predictor 20 years ago.

Powell required a rethink, even mildly ridiculing the hawks stuck on the old non-working model. We don’t have a new model (his speech described work on a new one), but we are free from rate-hiking solely because the unemployment rate is too low.

On Tuesday, he required another rethink of a long-cherished view by economists. The equation governing the Fed’s economic speed limit has been: Workforce growth plus productivity gain equals non-inflationary growth, with productivity defined as gross domestic product (GDP) divided by hours worked. If GDP heat raises the pay of workers beyond gains in productivity, the excess will be inflation.

On Tuesday he blew up the traditional thinking about productivity, which has been slow and therefore reduced the Federal Reserve’s GDP speed limit and encouraged a tighter Federal Reserve than necessary.

Powell’s key observation on Tuesday: “Recent research suggests that current official statistics may understate productivity growth by missing a significant part of the growing value we derive from fast internet connections and smartphones. These technologies, which were just emerging 15 years ago, are now ubiquitous.

“We can now be constantly connected to the accumulated knowledge of humankind and receive near instantaneous updates on the lives of friends far and wide. And, adding to the measurement challenge, many of these services are free, which is to say, not explicitly priced. How should we value the luxury of never needing to ask for directions?”

In his essay this week, he writes: “The increase in technology and technology-enabled disruption is also putting a spotlight on the adaptive capabilities of the workforce. In surveys of 29 participating Organization for Economic Cooperation and Development countries, the U.S. ranked 20th in assessments of adult literacy and math skills. It also ranked 24th out of 35 developed countries in measures of math, science and reading skills among 15-year-olds.”

An energetic politician might think to do something about that, especially in the depressed countryside.

To distract yourself from all of that other stuff going on, ruminate on IT and productivity. My generation is the last to be comfortable with maps (paper and mental), and prefer them to my car yapping at me. A college student barely 15 years ago needed a class to learn how to use a library.

Not just the decimal system and card catalog, but research materials, gazetteers and encyclopedia. And then the student had to go to the library, find the book (unless someone else had it) and thumb physically through the pages, every page out of date by years or decades.

They also had to find, load and scroll through archives on microfilm. If you don’t know what that means, look it up.

And hard-heads worry about a shortage of productivity? Pshaw.

The 10-year Treasury note in the last year. The double-bottom is concerning, often marking the end of a trend, just as it did the double-top last November: 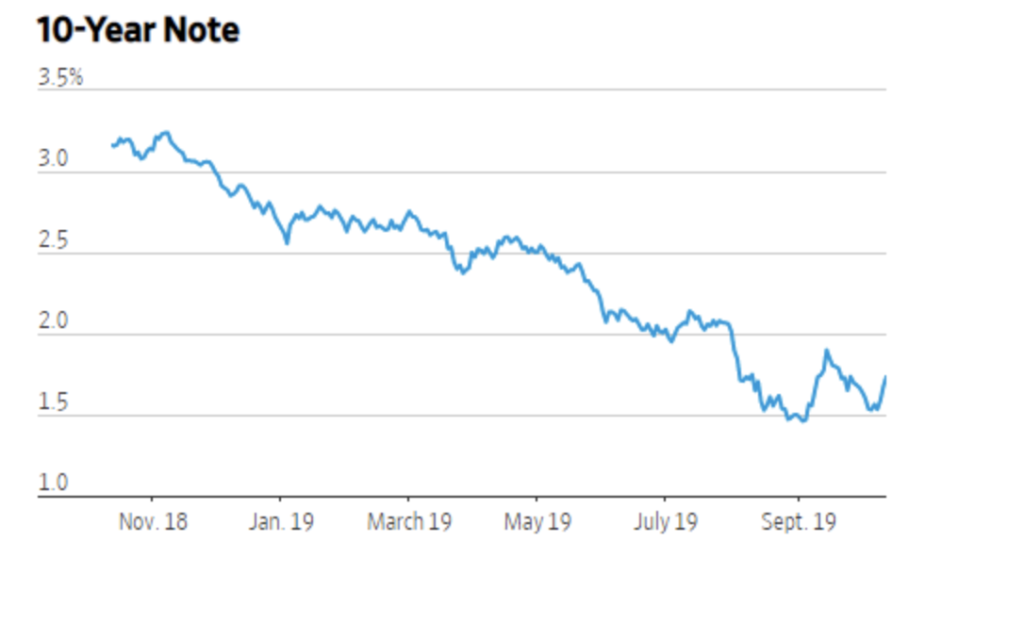 The Atlanta Federal Reserve’s latest was updated on Wednesday, and is based on changes in GDP components —  there is no way to build a trade deal into its forecast. And a trade deal may not be as beneficial here or overseas as hoped. Other issues remain: 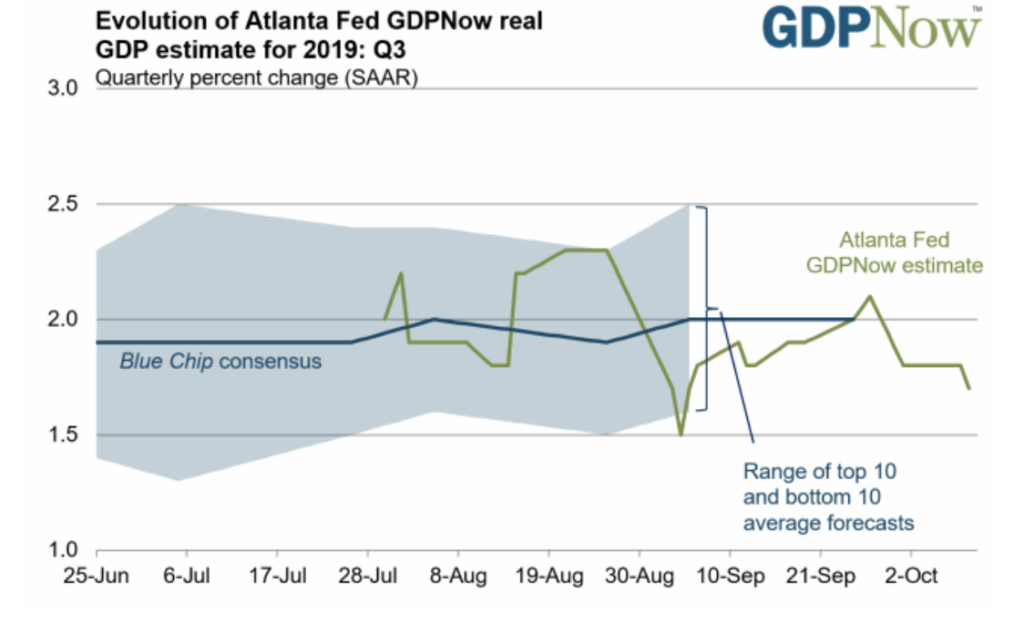