Pam Liebman dishes on coded discriminatory language in real estate and the Fair Housing Act training that all new agents at Corcoran are required to attend.

Corcoran CEO Pam Liebman thinks Newsday’s recent groundbreaking investigation into discriminatory real estate practices is Pulitzer Prize-worthy. New York City-based Corcoran was one of just two brokerages – out of the 12 investigated – that did not reportedly engage in any discriminatory practices.

Agents at the center of the report were accused of steering undercover investigators to neighborhoods that matched their own race or ethnicity and often subjected minority investigators to more restrictive conditions prior to viewing properties.

Corcoran makes all of its new hires attend a one-class Fair Housing seminar where agents are taught local, state and federal laws. Topics of the class include specific phrases that violate the Fair Housing Act and modes of conduct when presenting properties to buyers.

Liebman sat down with Inman Thursday to discuss her reaction to the report and the steps Corcoran regularly takes to ensure that all of its agents comply with the standards set in the Fair Housing Act.

What is your immediate reaction as a brokerage CEO to the Newsday investigation?

I felt like we were back in the 1950s. I mean, I was just so upset by it. It was disturbing because it’s just not something in our vernacular at Corcoran, we’re so into Fair Housing. We do lots of training and I think we’re a very diverse company. Two years ago, when a lot of stuff started heating up on this topic, we produced the diversity video.

And I have to tell you, when we played that, of all the things we’ve done, it probably got the biggest round of applause ever because the agents are so committed to it. When you look around our company, in a big auditorium, I’m proud to say we represent a diverse community, people of all colors, shapes, sizes, proclivities, we don’t care. It’s just really… it’s sad. It’s actually sad that people would still participate in steering and not showing certain people houses that they would show other people. It was very upsetting. I was watching the videos, I had to stop watching them. I was just appalled.

Is there relief when you see that Corcoran is one of the brokerages to not have any agents discriminate, or is that something you didn’t consider would be possible with your agents?

I didn’t think it was possible. I certainly hope it wasn’t possible. It is something that we talk about in so many different contexts. I wasn’t surprised at all. I was very happy by it. But look, anyone could have someone who went rogue. So if you asked me where this was a little bit of a sense of relief, of course, but I was not surprised.

A lot of the brokerages accused in the investigation are franchisees. Corcoran recently started franchising, so how do you ensure these separate companies that are using the Corcoran brand are upholding the same standards?

I would say that we’re only picking people that reflect our values and part of our values include the treating of all people equally. The other part of it is, we do a lot of Fair Housing training and that’s going to be a requirement for any of our franchises. So every single person who joins Corcoran gets Fair Housing training. They like it, they actually believe in it.

Years ago, you would see things that seemed just part of real estate, language in ads, ‘great for families,’ or ‘this is the right school district,’ or something like that. These are code words and we systematically got rid of those code words. We had a program a long time ago, we put a program in place, so if somebody were to put the wrong word and try and put it into an ad, it wouldn’t take it. It would just block it.

On a broader level, obviously, this was in Long Island and specific to Long Island but this is happening across the country. Do you think the National Association of Realtors and local trade organizations are dedicating themselves enough to Fair Housing training and informing agents of what to do and what not to do?

I can’t really say. I can only speak from my own company, but I think in New York, it’s certainly a topic of conversation because we are a very diverse city. We work in Manhattan, we work in Brooklyn, we work in Queens, and these are very diverse communities. I think the Real Estate Board of New York is, as far as I know, very attuned to Fair Housing and then it’s up to the companies to pick the right brokers and to enforce it.

At the end of our training, agents are given a handout that includes like, why do we have a Fair Housing Act? What’s the history of it? What’s the procedure for filing a complaint? What are the violations? What are the exceptions? We give them the handout and the seminar covers of the laws and regulations on federal, state and city levels.

Do you hope there’s some sort of collective awakening from the publishing of this article or do you think the status quo will linger on?

Now I would say that’s an understatement. If this is not a wake-up call to this industry, I don’t know what is. This is thoroughly researched, it’s so in-depth and it has video. I don’t know how anyone could look themselves in the mirror if they don’t step it up now and abide by these Fair Housing laws. These laws were put in place to protect people and to create a society where everybody is treated equally and we all feel great. If we found somebody that was violating these rules they would be dealt with very strictly and very sharply and very quickly.

How would Corcoran deal with one of its agents engaging in this behavior?

A blatant, blatant discriminatory act would result in disassociation with the brokerage. 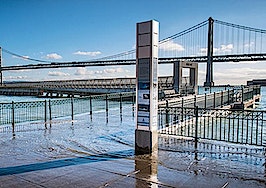 'Blue-lining' could be the new redlining, Fed branch warns