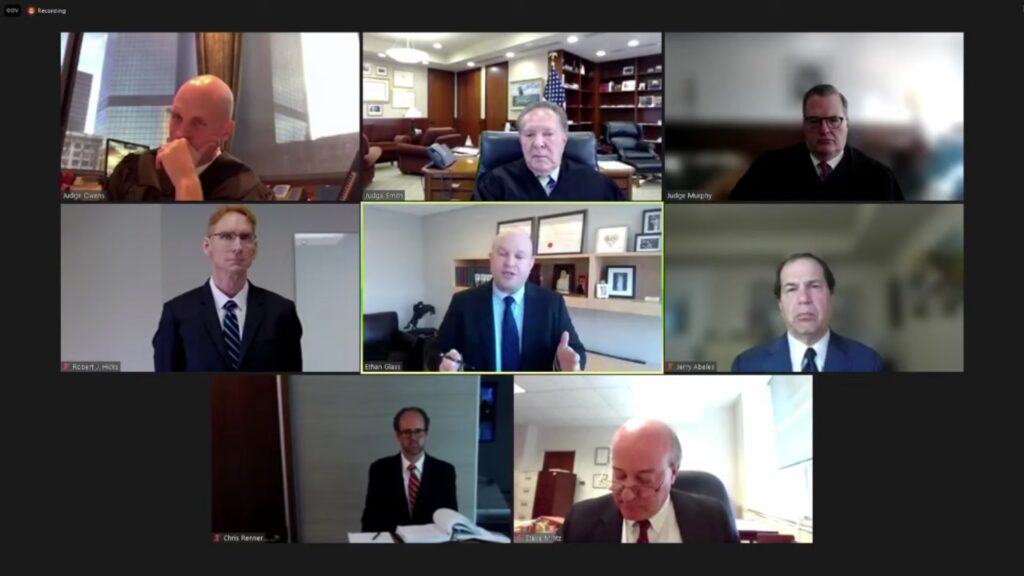 NAR’s attorney says The PLS is trying to “have their cake and eat it too” by claiming brokers are both the victims and the perpetrators of the Clear Cooperation Policy.

The PLS, a former private listing network for real estate agents, should not have to argue that a pocket listing rule from the National Association of Realtors harms consumers or buyers in order for its antitrust case against the trade group to go forward, an attorney from the U.S. Department of Justice argued at an appeals court hearing last Friday.

Steve Mintz, an attorney for the DOJ’s antitrust division, spoke for just over six minutes at the Jan. 14 hearing, which was held virtually.

“Harm to competition at any market level is sufficient to state a claim,” Mintz said with regards to antitrust enforcement generally, countering U.S. District Judge John W. Holcomb’s argument that The PLS had to allege direct injury to end-user consumers.

In May 2020, The PLS, formerly a private listing network for real estate agents, filed a federal antitrust lawsuit against NAR and the California Regional MLS (CRMLS), Bright MLS and Midwest Real Estate Data (MRED) over the controversial Clear Cooperation Policy, which requires listing brokers to submit a listing to their MLS within one business day of marketing a property to the public.

In a Feb. 3, 2021 opinion, Holcomb dismissed The PLS’s case with prejudice, or permanently, and without leave to amend, finding that while The PLS had alleged facts showing harm to its own business, the company did not plausibly allege harm to competition or to consumers, and failed to allege a plausible injury to participants on both sides of the real estate market — not just to sellers, but also to buyers. Even accepting The PLS’s allegations as true, the Clear Cooperation Policy has “some plainly pro-competitive aspects” because it increases the information available about market conditions, Holcomb said.

The DOJ, which is currently investigating NAR over the Clear Cooperation Policy and other rules, has appeared to have a keen interest in the case since at least since June. On May 26, The PLS filed an opening brief appealing Holcomb’s decision, and on June 2, the DOJ Antitrust Division filed an amicus brief in support of neither party, but echoing the arguments in The PLS’s appeal.

At the end of November, the DOJ got permission to speak at oral arguments in The PLS’s appeal at the 9th U.S. Circuit Court of Appeals.

Mintz said the lower court “wrongly held” that PLS had to consider the policy’s impacts on both buyers and sellers as if listing services were transaction platforms, which he said they are not.

Facilitating transactions does not make something a transaction platform because such a definition is “far too overbroad” and could encompass things like newspaper advertising, legal services that facilitate mergers and acquisitions, or cell phones that facilitate retail sales, Mintz added.

Even if listing services were transaction platforms, The PLS is not required to make separate allegations of harm to buyers because a previous circuit decision has found that an allegation of net harm — where the harm on one side of the platform outweighs the benefits on the other side — is sufficient, Mintz said.

Christopher Renner of Jenner & Block represented The PLS at the hearing and made similar points to Mintz, but spoke more about the harm of the CCP on the consumers that are the direct purchasers of listing services: brokers, rather than buyers and sellers.

“We’ve clearly alleged that the relevant market is the market for listing network services,” Renner said. “That was the market where PLS competed with the MLSs. The direct purchasers are real estate brokers. That’s the level of the market where the antitrust analysis needs to focus. And that we believe is the single, simple dispositive error that the district court committed.”

In its brief submitted before the hearing, the DOJ agreed with The PLS on this point as well. But Ethan Glass of Quinn Emanuel Urquhart & Sullivan, who represented NAR at the hearing and spent nearly nine years at the DOJ as an assistant chief and trial attorney, said he “respectfully disagree[d]” with his former colleagues whom he said had “ignored the allegations in the complaint” where The PLS “clearly identified” that the consumers they are alleging have been harmed are homebuyers and sellers.

Moreover, he said a previous Supreme Court decision did not actually require that platforms had to have simultaneous transactions in order to be transaction platforms, but rather that they be two-sided.

In addition, Glass stressed that The PLS was trying to paint brokers as both victims and perpetrators. He pointed out that the MLSs in the case do not share geographic borders and therefore do not compete with each other, “so they cannot harm competition. They cannot unreasonably restrain trade.” For this reason, The PLS alleged that the members of NAR — brokers — were conspiring with each other to take down The PLS, according to Glass.

In a rebuttal, Renner pointed the judges to a previous circuit court decision in Robertson v. Sea Pines Real Estate Cos. that he said determined that the rules of a multiple listing service are considered “concerted action” within the meaning of Section 1 of the Sherman Antitrust Act, but that the question of whether brokers are members of the conspiracy is an “analytically distinct question.”

The appeals court will likely render a decision in the case later this year.

Watch oral arguments in the case: