Redfin’s Homebuyer Demand Index rose 7 points during the last week of July, while mortgage purchase applications rose for the first time in five weeks, according to new data released Monday.

Homebuyer activity is showing signs of life as mortgage rates fall below 5 percent for the first time in months, according to a new report.

The report, released Aug. 5 by the online brokerage Redfin, showed that Redfin’s Homebuyer Demand Index — an in-house metric that measures homebuyer activity — rose 7 points during the last week of July, while mortgage purchase applications rose for the first time in five weeks.

The rebound in buyer interest is yet to result in any increase in actual home sales, the report noted, but the housing market has remained strong overall as the economy at large has faltered.

“Homebuyers may catch a break this month as rates have come down nearly a point from the recent high on fears of a recession,” Redfin Deputy Chief Economist Taylor Marr said in a statement. “There are deals to be had on some homes that have been sitting on the market with reduced prices. General economic uncertainty may continue to keep a lid on homebuyer demand and keep mortgage rates volatile, but the labor market remains a beacon of strength in the economy and the housing market in particular.”

Thirty-year mortgage rates fell to 4.99 percent during the week ending Aug. 4, the lowest level seen in four months. Mortgage rates previously topped out at 5.81 percent after seeing lows of 3.11 percent at the start of the year.

Searches for “homes for sale” were up 9 percent during the week ending July 30 compared to late May, but were down 24 percent from the year earlier.

Touring activity meanwhile, was still down seven percent from the beginning of the year, according to data from the home touring portal ShowingTime. At the same time last year, it was up 15 percent from the start of 2021. 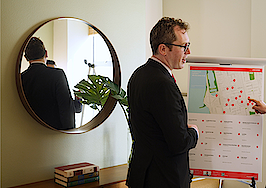 Sponsored Content
The shifting market is an opportunity. Here’s how to seize it.