Thirty-year, fixed-rate loans hit 6.982 percent on Oct. 13, a new 2022 high, according to an Optimal Blue Mortgage Market index. According to an index by Mortgage News Daily, rates were at 7.15 percent.

Demand for home loans hit the lowest level since 1997 last week as mortgage rates continued to climb toward 7 percent, hitting the highest level in 20 years, according to a weekly lender survey by the Mortgage Bankers Association.

“The speed and level to which rates have climbed this year have greatly reduced refinance activity and exacerbated existing affordability challenges in the purchase market, MBA Deputy Chief Economist Joel Kan said in a statement. “Residential housing activity ranging from new housing starts to home sales have been on downward trends coinciding with the rise in rates.”

Requests for adjustable-rate mortgage (ARM) loans accounted for 12.8 percent of all applications, the highest share since March, 2008.

With rates on 30-year fixed-rate conforming mortgages at the highest level since 2002, “ARM loans continue to remain a viable option for borrowers who are still trying to find ways to reduce their monthly payments,” Kan said.

Demand for mortgages has been falling for four months as rising rates make homes less affordable. With few signs that inflation is cooling, bond market investors are expecting the Federal Reserve to implement its fourth 75-basis point rate hike of the year on Nov. 2.

Last month, at a meeting in which they raised their target for the short-term federal funds rate to 3 to 3.25 percent, Fed policymakers indicated that expect to bring the target up to 4.4 percent by the end of the year, and to 4.6 percent next year.

The CME FedWatch Tool, which monitors futures contracts to calculate the probability of Fed rate hikes, shows traders pricing in a 95 percent probability of a 75-basis point rate hike next month, and a 61 percent chance of another drastic hike of the same magnitude on Dec. 14.

That would bring the short-term federal funds rate to a target range of 3.75 to 4 percent in November, and 4.50 to 4.75 percent in December.

For the week ending Oct. 14, the MBA reported average rates for the following types of loans:

Thanks to higher mortgage rates, home price appreciation during the pandemic, and the chance of a recession next year, economists at Fannie Mae said last week they expect home sales will fall by 18 percent this year and by another 21 percent in 2023, to 4.47 million. 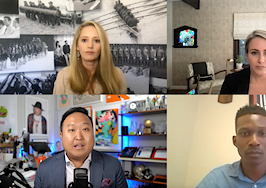 Homebuilders suspect demand for new homes will fall even further