Bill Risser is an Assistant Vice President and Branch Manager for Chicago Title in Phoenix Arizona. When he is not conducting workshops or closing escrows, he can be found at the movies with his wife or golfing with his son. Follow Bill on Twitter @billrisser or friend him on Facebook. 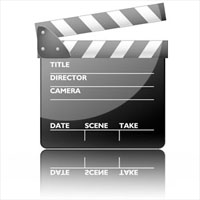 Recently, I completed what some of my friends called a foolhardy challenge. Back on June 11th, I posted a video blog entry and proudly proclaimed it was the first in a series of one hundred video posts in one hundred business days. Yep, I would shoot a video on a title/escrow or technology topic and post every business day. The first ten were easy enough, but by video twenty, I really wished I had challenged myself to thirty posts. Without missing a day, video one hundred was finally posted on November 4th.

The purpose of the challenge was to force myself to practice a couple different things. One was content creation. It is definitely the biggest challenge facing agents that decide to start blogging. Second, I wanted to learn more about shooting and editing video. Video is considered by many to be important for content and allowing readers to get a better feel for the blogger as a person.

My entire series was shot on a Flip Mino. I shot from a tripod on my desk, and edited first with Flip Share (the software that comes with the Flip) and later with Windows Movie Maker. I intentionally used free editing software, and a low budget camera to see what could be created at minimum expense.

I like the results. I did two multi-part tutorial series (one on HootSuite and one on Facebook). I created a video I intend to continue producing called 20 RE Professionals, 1 Question. I became comfortable with these video tools and I can now help agents learn and use them. Best of all, I now have a library of over 100 videos at my disposal. If a client sends me an e-mail asking for an explanation about the lenders policy of title insurance, I can reply with a link to the video post in my blog that answers the question.

Video number one hundred is below. It’s a blooper reel from my challenge. If you decide to work with video, don’t just toss those mistakes. I began categorizing and saving them, with the intention of eventually using them. I’d love to hear what you think…