by Michael Price
Share this article
You successfully shared the article.
Close 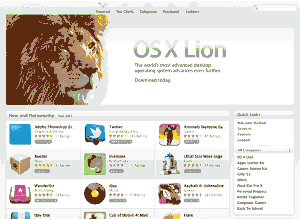 One of the most significant changes has nothing to do with the software at all. For the first time, Apple is providing the $29 update via direct download from the recently released Mac App store application. Beginning with Lion, the app store will be integrated with the operating system. The only other option for acquiring Lion will be to purchase a USB thumb drive with the software pre-installed at a cost of $69. I doubt you’ll see people lining up around the block to spend $40 for something they probably have half a dozen of at home.

There are quite a few resources on the web dedicated to the new features in Lion. I will highlight what I think are the most significant. In total, there are 250 new features. If you really want to know everything about the anatomy of Lion, Ars Technica has created a resource that reviews in mind numbing detail.

You’ve Been Gesturing In The Wrong Direction 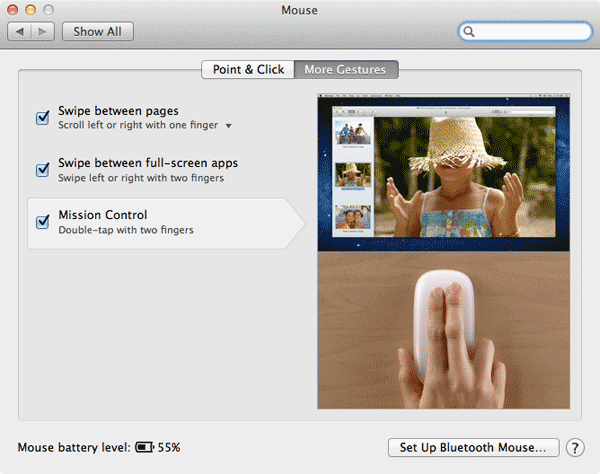 The installation of Lion is probably the smoothest of any major OS update I have ever done. The Mac App store application is beautifully simple with a user interface that gets its right. I found the link, clicked on the “Buy App” button and the download began. The installation process was simple. For a major OS upgrade I was blown away at how quickly and flawlessly it took place. I walked away to make dinner thinking it would take a lest a couple of hours. I came back to check in a little over an hour and it was done. I’m not sure exactly how long it did take. (Note to self, if you’re writing a review, don’t get distracted by stir fry). The first thing you are presented with is a screen explaining the new multi-touch gesture functions for your track pad or mouse. A handy little guide brings attention to the fact that the direction you have been using to scroll vertically is now reversed. It takes a little getting used to. You can change it the preference settings, but I chose to become one with the convergence. I’ll get the hang of it eventually. That’s just the tip of the iceberg. You really have to watch the video clip Apple has to see how cool all of the different ways to use finger gestures can make navigation so much easier.

Auto Save and Versions 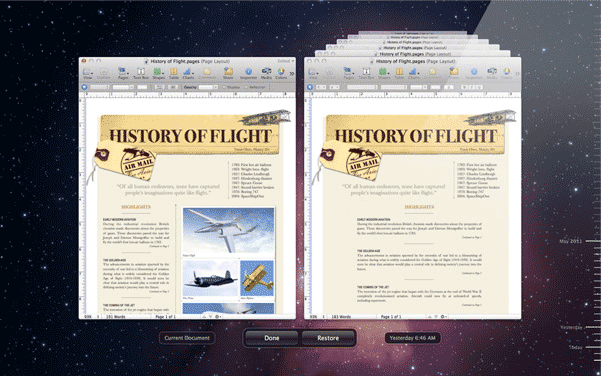 Even the best blogger, writer, graphic artist etc. has been nailed with the dreaded, Oh ^%$# the app just crashed and I haven’t saved the last x number of hours work. Lion eliminates the need for manual saving and saves in the background every 5 minutes or during a pause in the use of an app. You can revert easily, use the duplicate feature to create a template and even lock down a file to prevent changes. Time Machine is an OSX back up feature released a few updates back. It allows you to visually see the time line of hard drive back ups. Versions is sort of a Time Machine feature for documents, allowing for a cool visual way to see different saved versions of a document.

There is a feature related to Auto Save and Versions that I believe caused an issue with my system. By default, Lion is set to remember which windows were open, positions etc. When you reboot, it opens in the same state you left it. This morning while booting up, the system seemed to choke trying to remember everything, as a result the boot up process was painfully slow and would not allow me to do anything until all of the start up items loaded and it remembered the window states. I changed the preference settings for this option and rebooted. I have not had a problem since. I’ll try it again after the first OSX update. It’s not a critical enough feature for me to kill valuable time trying to get started with my day. 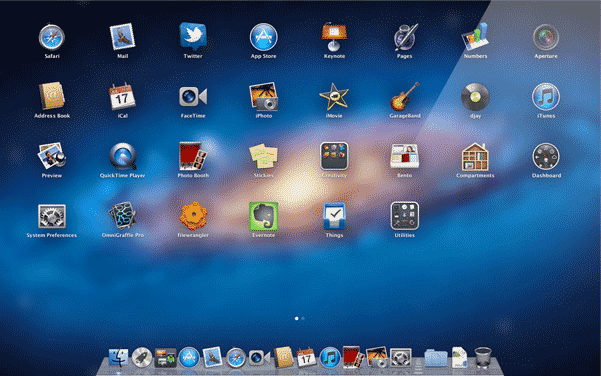 One of my favorite new features of Lion is “Launch Pad”. If you’re like me, you have a bunch of apps. You can’t create a shortcut alias on the dock for all of them and sometimes searching through the applications folder can be a bit tedious if the spotlight search has turned up no results for that app you thought you would only use once and need again. Using the app icon or one of the nifty new multi-touch gestures to launch Launch Pad converts your desktop to a scrollable window with all of your apps up front and easy to see. Here’s where iOS shows itself again. Creating folders, adding and deleting apps is identical to the method used for your iDevices. 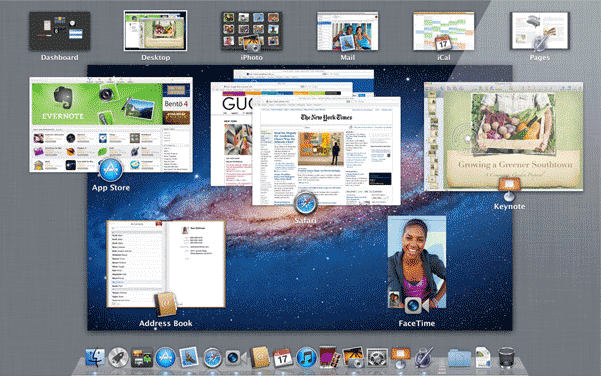 Using the new multi-touch gesture of swiping up with 3 fingers launches the new feature entitled “Mission Control”. This essentially marries the functions of Expose, Dashboard and Spaces to provide you with a view of everything taking place on your mac. If you use your Mac like I do, there can be a lot going on and finding that Skype window you buried while you were playing Angry Birds while staring at the half written blog post you were supposed to have done yesterday gets much easier. Also new to Lion are “Full Screen Apps”. It’s like maximizing a window on steroids. Click the icon and the application stretches and pushes everything else out of the way, a quick gesture or the esc. key reverts back to the previous desktop state. 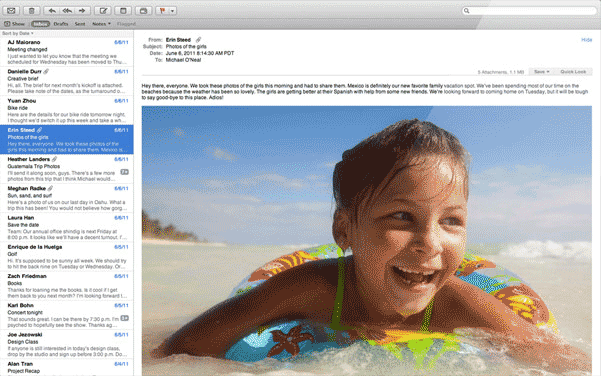 One of the best apps on a Mac is the E-Mail app that comes standard. It’s simple in its design and handles junk mail better than anything I’ve used. I knew that Lion was going to introduce an entirely new version and I was a little apprehensive that the simplicity of the interface was going to start going the way of, God forbid, Outlook or something like it. My fears were allayed and what I have now is even better. It is elegant in its understatement. Smart mailboxes can be created that are essentially saved searches that allow you to group emails any way you like. Integration of 3rd party accounts like g-mail happen with one click. No entering account information and mail servers etc. Just, click all of your Google settings appear as a new mailbox. E-mail previews are full size and the way conversations are tracked and displayed is another thing of beauty.

I’m digging Lion so far. With the exception of the start up problem, I’ve found it to be very fast and stable. I haven’t even scratched the surface of the new features and many things you wouldn’t notice unless you were looking. Like the way scroll bars are handled or the fact that icons are cleaner, simpler and a departure from the old days of “aqua” where everything had to look like a shiny clear lozenge. There are some things to be aware of if you’re considering an upgrade. First, be sure to bring everything on your system up-to-date. If you’re running apps created for use on non-intel chip based macs, you’re going to be out of luck after your upgrade. Support for those apps is now officially over. I have an older version of Office running and I was aware that it wouldn’t work after this upgrade. If you’re not sure about an older app, check first. All of your other apps should run fine and developers will be rolling out updates for apps that take advantage of the new features in Lion. I’ve done some cursory investigation about Lion and it would appear there are people having issues similar to the one I described and some have been considerably worse. As with any new operating system upgrade, if you do not have a back up means of operating should the upgrade go horribly wrong, you should wait at least 6 months to do the upgrade. Let’s face it, the real beta testers are guys and gals like me that go forth boldly despite the risk. So far, I am not disappointed.