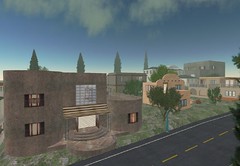 In one of the more interesting announcements to come out of Connect last week, Coldwell Banker announced it had modeled a real life listing inside of the virtual world Second Life. (You can see the full property details here)

As far as a publicity gimmick, it was inspired – but as far as a practical way to market a listing it strikes me as an expensive, time-consuming practice.

Second Life, which claims over 8 million virtual residents, has been a hotbed of corporate activity recently trying to get a handle on Web 2.0 environments. This is not new territory for CB either, as it has already opened a virtual office in the world. (see Coldwell Banker Opens Office in Second Life)

But as a recent issue of Wired magazine reported, this push by Fortune 500 companies has been largely ignored by most residents (see How Madison Avenue Is Wasting Millions on a Deserted Second Life) who seem more interested in exploring the seedy side of cyberspace.

If CB really wanted to explore marketing listings in a virtual world, they would be better advised to use a tool like Google’s SketchUp to create a 3D model of the home and populate inside of Google Earth. (see It’s a Google world)

This approach has several advantages. One, it’s free.

Secondly, Google Earth is far more accessible to average consumers. Users do not have to register with the service, a simple download to their desktop suffices. Further, users do not have to create an ‘avatar’ and subject themselves Second Life’s unituitive learning curve, with it’s bizarre teleport and flying behaviors.

Google Earth is a complex 3D rendering of the real world, but one that ultimately is easy to navigate – and a listing inside its confines has the necessary context and relevancy missing in Second Life.

Marketing a property with Google Earth doesn’t have the headline pull of putting a listing inside Second Life – but at the end of the day, could be far more practical and useful.