by Darin Persinger
Share this article
You successfully shared the article.
Close

His wife, Dorothy, and her followers, known as “The Seekers of the Seven Rays,” sat in the living room. 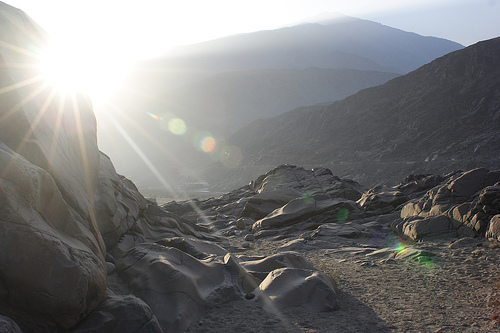 They sat in the living room waiting to be picked up in flying saucers by extraterrestrials, known as The Guardians from the planet Clarion.

A spokesperson for Dorothy, Dr. Laughead, a former staff physician at Michigan State, shared with those who would listen, “There will be much loss of life, practically all of it, in 1955. It is an actual fact that the world is in a mess. But the Supreme Being is going to clean house by sinking all of the land masses as we know them now and raising the land masses from under the sea.”

On Dec. 20, 1955, Dorothy and her truly committed followers waited. These followers had quit their jobs, and given away their homes and savings, waiting for the flying saucer at Dorothy’s house in Oak Brook, Ill.

But other believers waited in fear at their home, alone. These believers had not made the same commitment to the “prophecy.” They had not given away their possessions. So, they sat at home waiting for the end of the world. This group, even though they were believers, would quietly lose their faith in Dorothy shortly after the events of Dec. 20.

As midnight approached, Dorothy and her group of 11 “Seekers” waited to be saved just before earth was to be destroyed. At midnight exactly, there was still no sign of a spaceship in the front yard of the home on South Cuyler Avenue in Oak Park, Ill. “The Seekers” grew nervous. By 2 a.m., the nervousness was turning into worry.

She said she’d just received a telepathic message from The Guardians saying that her group of believers had spread so much light with their unwavering faith that the Supreme Being had spared the world. The entire world had been spared because of the impressive faith of “The Seekers.”

Didn’t her group think she was crazy? Not at all.

The Seekers didn’t abandon her. Most became more devoted after the failed prophecy. But, the other group of believers that waited at home alone, who had not joined Dorothy in her home, who had not given away their possessions, home and savings, would quietly lose their faith in her.

Why do some people go to bizarre lengths to avoid dealing with inconsistency in their beliefs and the facts?

Why do people interpret the same evidence in contrary ways?

Leon Festinger, a social psychologist, calls this cognitive dissonance. And this story of Dorothy and “The Seekers” was told by Festinger in his book “When Prophecy Fails” after he had infiltrated her UFO cult.

Cognitive dissonance is a discomfort caused by holding conflicting cognitions simultaneously. Because our human brain doesn’t like this, we tend to deny, deflect or defend the fact or ideas that could influence our current thought process.

People that already have a bias tend to seek consonance among their cognitions.

What does cognitive dissonance have to do with real estate?

In my opinion … everything.

Recently, a San Diego, Calif., real estate brokerage, ARG (Abbott Realty Group Inc.), posted a video to explain why it is pulling its listings from Realtor.com, Trulia and Zillow.

Chris Smith talked one on one with ARG CEO Jim Abbott about this.

I watched Facebook groups of real estate agents with hundreds of comments debate this action by ARG. There are comments by agents on the ARG YouTube video. There are more than 50 comments on Chris’ interview with Jim.

I don’t get it, but that’s what witnessing cognitive dissonance behavior is like, I guess.

Agents and other brokers jumped on that simply stating “how wrong he is” for doing this.

If I’m that broker in Philadelphia and I’ve bought ads on Realtor.com and Trulia or send my clients to Zillow to review my services or answer a Q-and-A on one of those platforms, what ARG is doing is flying in the face of my “beliefs.” And now I have to defend these beliefs.

I have to comment in Facebook groups and pages. I have to make YouTube videos explaining the only reason why ARG is doing this is because of dual agency (even though Jim shared numbers about dual agency in his brokerage).

My beliefs about the Internet and third-party aggregators and the future of the real estate industry are at risk because of this one 25-agent brokerage in San Diego.

Maybe Jim and ARG are right.

Maybe Jim and ARG are wrong.

But does what they decide to do with the marketing of their listings actually affect you?

Should you be spending time, energy and effort to defend your position about the Internet and third-party aggregators?

Or should you go back to work and worry about marketing your own listings — not how Jim and ARG market theirs?