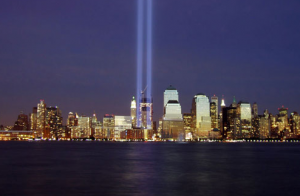 It is hard to believe ten years has passed since 9/11.

In this special edition of InmanNext, I invited our featured contributors to be a part of this post. I asked them to share where they were on 9/11 and how they feel things would be different if the same thing happened today in 2011 – now with social media channels such as Facebook and Twitter.

I want to take a moment to thank each of them for sharing their personal thoughts – I know for many, it is very difficult to talk about 9/11, and I truly appreciate their candor.

Here are our stories…

On 9/11 I was living back at home with my parents temporarily. I had just gotten engaged seven days before, and had just left a job that I had been at for over six years. I was asleep when my mom came in and abruptly woke me up. In my half-awoken stake I flipped on the TV to see the first plane burning in one of the towers. I remember feeling flabbergasted that this happened here, in the United States, in our lifetime.

Moments later, we were in a panic because we knew one of our cousins worked in the World Trade Center. In what seemed like hours later, we later found out that he did not go into the office that day. Living in the San Francisco Bay Area, we were worried that we were next.

Fast-forward ten years and I am about to celebrate my ten-year wedding anniversary, I have a career that I absolutely love and I am a mom to two amazing children. I think if Facebook and Twitter had been around ten years ago – it would have sped up the flow of information. Ten years ago, we all sat glued to our TV’s for days as the main source of news and information. But if social media existed as it did today, I would like to think that the events of the first few hours may have unfolded differently – perhaps information would have reached people faster, perhaps people would have been able to look for their loved ones more effectively, perhaps less lives would have been lost. Perhaps.

I remember getting ready to go to class at Florida State University the morning of 9/11 and seeing what was unfolding. I was in a weird predicament as there was a quiz that day that was worth 25% of our final grade so I had to go to campus and had to stop watching.

I suppose had Twitter or Facebook been around I would have certainly felt like I wasn’t missing anything major while in transit. Radio seemed to do the  job pretty well though.

My life today looks nothing like it did 10 years ago. Kids. A wife. Degree. Career.

Many things have changed.

The sorrow, vulnerability and uncertainty I felt that day are memories that are still easily recalled even 10 years later.

Now as a resident of Brooklyn it feels even closer to my heart.

It is certain what is often said, we will never forget 9/11.

I worked in the music industry on 9/11/2001.  I had to be in the studio at 9 am to meet with an artist and decided to stop by the YMCA for my morning workout.  I remember running from the chest cables to the TV in shock when I heard the screaming from the cardio room.  I immediately ran to the vending machines in the hallway, dropped to my knees and prayed harder than I’ve ever prayed.  Had 9/11 happened during the social media boom, I don’t know if we could’ve handled the photos from the street emotionally.  I honestly think it would’ve taken down Twitter and Facebook with overload.

I was about to take one of our pets to the vet; while I was on the phone with our vet said to turn on the news and that something terrible had happened.  I watched the 2nd plane hit live after getting off the phone, and spent the rest of the day at home.  That week I was in process of joining the real estate industry, and I began working for a franchise brand at their company headquarters the following week.

If 9/11 happened today, I think less lives would have been lost.   The use of Twitter would allow the response efforts to occur more quickly and for people in the buildings to get information that they otherwise could not.  I also think that Twitter might have prevented other highjacking efforts that morning.  In the recent fires in central Texas, twitter has played a role in coordinating rescue and response efforts, and has allowed central Texans to create informal networks by constituting a hash tag, like #texasfires.

I was actually teaching first and second grade on 9/11. And I got there early in the morning to prep as usual. Reggie called me and told me to turn on the TV in my room. When I saw the first images of the plane going into the 2nd tower I was in overwhelmed with sadness and fear. Who did this? Was it an accident? Could it be something worse?! And I wasn’t the only one with these questions. I had students lining up for the start of class, accompanied by worried parents. What would I say to them, and to their children? Luckily we made it through a tough day of questions and confusion. I invited the parents into class that morning. I assured them their children would be able to explore their emotions through art and play that day. And it was not surprising to see how much 6 & 7 year olds understood what was happening that day.

Had we been logged into Facebook and Twitter, I would have had a much clearer idea of the atrocity that occurred. The real-time sharing would have broken the news fast and I would have had more of a chance to prepare for my students’ questions. Facebook and Twitter would have been amazing for rallying people together on so many different fronts, as well as for finding loved ones. All in all, I’m really proud of how our country reacted and leaned on one another for support (w/o these tools). But thanks to Facebook I’m actually friends with 2 of the students (& their parents) that were in my class on that very day 10 years ago.

I had just moved from Canada to Sarasota, FL two weeks before 9/11/01.  That day the President was at one of our local schools listening to some children read stories, about 4 blocks from where my son was attending preschool.  I was sitting in a Kelly Services employment office taking a typing test so that I could start being used as a temporary worker, when I heard commotion about a “private jet accidentally flying into one of the Twin Towers”.  Being fresh into the country, I had no idea what the significance of the Twin Towers was, but I did by the end of that day.  And from that moment on, it just became more and more surreal.

The way the events played out was fast for back in the early 2000’s – watching the catastrophic events unfold on live TV.  But there was no uploading raw footage onto Youtube.  No immediate tweets or Facebook posts.  Today we would lack any type of censorship.  The information would flood in and be totally uncontrolled.  For some it would be a blessing to know where people were and that they were safe – for others it would be pure torture… that’s both the beauty and the disturbing reality of today’s media.  There are no filters, like it or not.  My thoughts and prayers go out to those that were (and undoubtedly still) affected by the events that took place 10 years ago today.

We’d love to hear your stories and thoughts about 9/11. How do you think things would have unfolded differently if Facebook and Twitter were around ten years ago? Or perhaps you don’t think it would have mattered?  Please leave us a comment below.