It was an absolute blast, with three total events (Agent Reboot, Data Summit and Connect), all of which were smashing successes.

Lots of people. Lots of buzz. Lots of learning. And lots of energy.

What I like best about these events is that they’re such a great mixture of things: education, cutting edge technology, super social events, great people and, well, FUN. Lots of fun. And much of what makes Connect special happens in the “in between.” In the lobby. In the backs of the rooms. Over meals. During drinks. In the hallways. Literally. 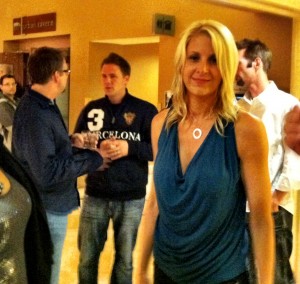 As an example, I took the photo at right in the lobby of the hotel venue one evening as I was just passing through. As you will note, Social Media stars Brian Clark (@Copyblogger) of Copyblogger, Chris Smith (@Chris_Smth) of Inman News, Nicole Nicolay (@Nik_Nik) of Agent Evolution and Reggie Nicolay (@ReggieRPR) of RPR were just hanging out, engaging in conversation. This is the kind of “scene” you see everywhere at Connect.

As further illustration, I made this video, which captures a bit more of the “what happens in the hallways” stuff.

Watch it and I think you’ll get a little taste of the Connect magic.

I hope to see you at the next (NEXT?) Connect!