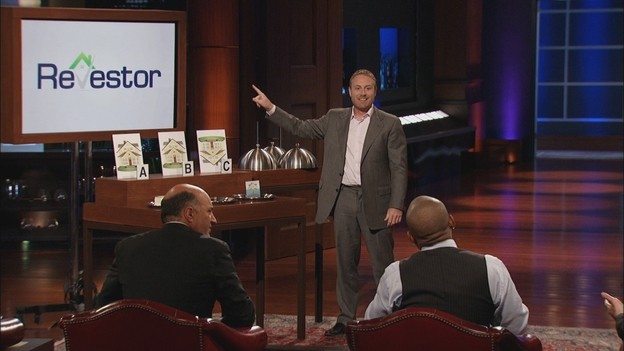 It sounds like every entrepreneur’s dream: You’re invited to pitch your idea for a real estate tech startup on a nationally televised reality show, to a panel of judges that includes business luminaries like Barbara Corcoran and Mark Cuban.

But then it turns into every entrepreneur’s nightmare. Not only do you not get the $250,000 in seed funding dangled before competitors, but the judges are mostly unimpressed with your idea — or worse.

That’s pretty much how things went for Bill Lyons, founder and CEO of Revestor, when he appeared on the ABC reality show, “Shark Tank.”

As Inman News readers know, Revestor is a real estate search portal aimed at helping homebuyers and investors find good deals by evaluating listings to identify those with the highest potential returns.

According to a summary of the show — which first ran in November, and is scheduled to air again tonight — Barbara Corcoran can’t get behind Revestor because she “doesn’t understand how it’s possible to make estimations on value.”

Mark Cuban “hates this type of business, so he’s out,” and Daymond John “follows his lead.” Robert Herjavec “doesn’t believe Bill has a real business concept, so he’s out.”

Kevin O’Leary “believes Bill is going after real estate investors, which is a smaller subset of all real estate buyers … He’s out, too. Bill will have to find another investor for Revestor.”

While others might have been tempted to throw in the towel after such a public drubbing, Lyons said his faith in Revestor’s model was unshaken.

“We’ll have fun (watching the show again) tomorrow night, ” Lyons said Thursday. “We’ll get beat up again, but it doesn’t matter to us. If we had a (shoddy) product, I would want to jump off a bridge.”

Without “Shark Tank” seed capital to take his company to the next level, Lyons said Revestor relied on “human capital” instead: time, sweat and blood.

The results will be on display today, and in coming weeks, as Revestor relaunches with a new Premium offering that lets users adjust criteria like down payment amount, mortgage rate, property management fee, estimated rents and investment strategy before conducting searches (the free version of the site allows users to adjust those factors one by one on the listing detail page, after conducting a search).

For brokers and agents, an even more intriguing service is in the works: Revestor plans to give members of more than 100 multiple listing services the ability to evaluate Internet data exchange (IDX) listings using the Revestor platform.

In markets where Revestor is able to partner with an MLS,  Lyons said, agents and brokers will be able to enter their client’s criteria into the Revestor platform to find properties that fit their needs as soon as they come on the market. Brokers and agents will also be able to give them direct access to the IDX-powered Revestor platform as a password-protected virtual office website (VOW).

Revestor currently relies on listing syndicator ListHub for listings, and that information can be 24 to 48 hours behind IDX feeds provided by MLSs, Lyons said.

While that’s fine for many consumers, serious investors in hot markets like San Diego and San Francisco want to know as soon as properties with the highest “cap rates” and cash flows come onto the market.

Lyons thinks some of the criticism that “Shark Tank” judges leveled at Revestor was off the mark — the site isn’t really trying to predict what a property will be worth in the future, for example, and he thinks it has the potential to be just as valuable to consumers as investors.

“I’m not saying tomorrow we can be Zillow’s biggest competitor, but we’d like to be up there,” Lyons said. “We want to be a legitimate competitor” for consumer traffic.

He attributed some of the difficulty of explaining what Revestor does to the fact that there was no wireless Internet capability in the television studio where “Shark Tank” was taped. Instead of walking judges through the site on his laptop, he said, he had to use cardboard cutouts of homes for visuals.

But Lyons isn’t at all bitter about the experience. He’s even promoting tonight’s repeat of the “Shark Tank” episode in which Revestor gets raked over the coals.

“We’re just stoked to be on there again,” he said. “There’s no way we could have gotten all this user feedback that’s driven the direction of the site” since the show aired, he said.

Lyons said about 90 percent of people who contact the company “see the potential” of what Revestor is trying to do.

Another 10 percent “think because the Sharks abused us, they can abuse us. They won’t even go to the website.”

What do you think are the most important attributes of a successful real estate tech startup? Leave your comment below.

Mentors announced for 'Inman Incubator' startup accelerator program
Back to top
Only 3 days left to register for Inman Connect Las Vegas before prices go up! Don't miss the premier event for real estate pros.Register Now ×
Limited Time Offer: Get 1 year of Inman Select for $199SUBSCRIBE×
Inmanpot
Log in
If you created your account with Google or Facebook
Don't have an account?
Create an Account
Forgot your password?
No Problem