A patent review board has ruled that more than two dozen claims made in a Zillow patent for an automatic valuation of a property are “unpatentable” and anticipated or obvious in view of “prior art” — information or practices already in public circulation when the patent was filed.

The decision, by the patent trial and appeal board of the U.S. Patent and Trademark Office, was the result of a challenge from enterprise software company MicroStrategy Inc. But the ruling could come into play in deciding the outcome of a lawsuit filed by Zillow against rival Trulia last year, a week before Trulia’s initial public offering.

In its lawsuit, Zillow alleged that the automated property valuations Trulia displayed on its site, dubbed Trulia Estimates, infringed on a patent filed in 2006 and issued to Zillow in 2011, U.S. Patent 7,970,674.

The patent’s title, “Automatically determining a current value for a real estate property, such as a home, that is tailored to input from a human user, such as its owner,” describes Zillow’s process for using information supplied by homeowners and real estate professionals to refine Zillow’s automatic home valuations, called “Zestimates.”

MicroStrategy petitioned the U.S. Patent and Trademark Office’s appeals board to invalidate Zillow’s patent in November 2012. The board rendered its decision on Thursday.

When asked whether Zillow plans to appeal the MicroStrategy ruling, a Zillow spokeswoman said, “The patent review is an ongoing process and, beyond that, we don’t comment.”

A Trulia spokesperson told Inman News that “If Zillow appeals the MicroStrategy ruling and wins, which is unlikely, we have different grounds on which the patent is invalid.” Trulia declined to comment further.

In October, a U.S. District Court judge in Seattle granted Trulia’s motion to stay litigation pending a decision on Trulia’s patent challenge, effectively allowing the portal to continue providing its “Estimates” to consumers as the challenge is being considered.

Patent claims define the boundaries of a patent holder’s rights — they outline what the patent holder may exclude others from doing. Trulia’s challenge will address all of the claims in the ‘674 patent. A ruling is expected by the end of 2014.

In February, the appeals board invalidated several key claims made in a CoreLogic patent for an automated real estate appraisal system as part of a covered business method patent review, deeming the claims “unpatentable abstract ideas.” Specifically, the board said that “determining a price,” as done in real estate valuations, has previously been found to be abstract as a method of calculating.

That decision could impact the outcome of a patent infringement lawsuit CoreLogic filed against online real estate brokerage Redfin in May 2012.

Earlier this month, a federal jury ruled that two patents held by LendingTree.com operator Tree.com Inc were invalid, a decision Tree.com plans to appeal. The jury also ruled that Zillow and fellow defendants Adchemy Inc. and Nextag Inc. did not infringe on the patents. 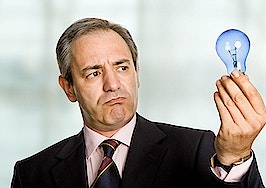 Jury rules in favor of Zillow in Tree.com patent trial
Back to top
Only 3 days left to register for Inman Connect Las Vegas before prices go up! Don't miss the premier event for real estate pros.Register Now ×
Limited Time Offer: Get 1 year of Inman Select for $199SUBSCRIBE×
Inmanpot
Log in
If you created your account with Google or Facebook
Don't have an account?
Create an Account
Forgot your password?
No Problem