Mortgage rates found a bottom at 4.00 percent, and the 10-year T-note’s return to base at 2.30 percent feels decisive.

Pay no attention to 0.7 percent GDP in the first quarter; the report filled with distortions and following an outsize four quarter. 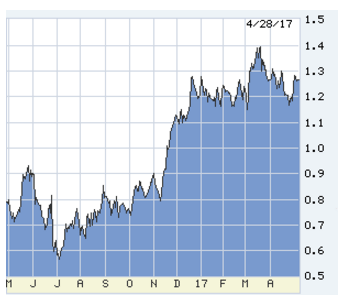 The 2-year T-note in the last year — the Fed-predictor. In March 2s began to price-in the next Fed hike, then overtaken by uncertainty. Next week’s data load, especially the job stats are likely to trigger the next round of Fed speeches hinting at next action.

This week’s dominant news has been President Trump’s tax plan. Trump has at last asked Congress to do something which it enjoys — giving away money which it does not have — but this time it isn’t going to turn out that way. 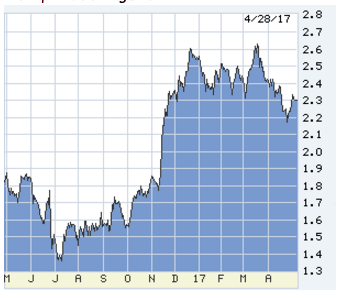 The 10-year T-note in the last year. The chance for a beautifully symmetrical reversal of the Trump Trade, gone.

Instead of comments on this particular plan, back far, far away to non-partisan distance and try to help youngsters to understand why the tax code is as it is, and why reform is so difficult.

I am not a CPA. However, I filed my own first tax return for 1963 summer construction work at age 14, and since then have had more than passing interest in how much I have paid in taxes and why. In the more recent 30 years as a mortgage banker, part of every day has gone to understanding someone else’s tax returns.

The first principle: To have a society we must share expenses, which means raising revenue. Property taxes are as old as civilization. U.S. income taxes date to the Civil War, although not in modern form until 1913, and basic political confinement of tax policy has not changed since.

The U.S. has turned away repeatedly from national consumption taxes (unlike the rest of the world), and we might embrace that option someday — but very gradually.

Third, taxes levied on business should be different than on individuals. The concept of “well off” does not apply to business — we presume all are well-off if open — and corporations are legal fictions to be taxed as such. Thus we tax business income earned by “C” corporations at different rates than individuals and with different rules than hybrid personal businesses and partnerships taxed as individuals on a pass-through basis, net earnings taxed like wages.

Fourth, all should pay something. You may have enough money to live on savings, but we will tax the income on your savings, its capital appreciation, and your estate. The lower-income half of Americans pay no income tax, but do pay fixed-rate “regressive” payroll taxes and receive in return social benefits far beyond their contribution to cost.

In “double taxation” we tax individuals for dividends received from business which has already paid taxes on profits, and apply capital gains taxes to the appreciation of assets bought with after-tax dollars.

The hyper-complex Alternative Minimum Tax is designed to force taxes from those who have otherwise used the code to make their incomes disappear. Enacted in 1982, AMT could not have been computed or assessed before computers, one their many mixed blessings.

Fifth, buried in the first four principles is the cause of the complexity of the tax code: We tax net income, net of expenses. The great bulk of the tax code is devoted to defining income, and expenses which may be deducted. The number of tax brackets has nothing to do with simplicity — schoolchildren compute percentages. The problem is percent of what?

Seventh, the politics: The right prefers small government and small tax bills, even the lower-income earners among right-leaners. The left prefers more government services, higher taxes, and its well-off supporters advocate higher taxes on themselves.

Included in the right is the libertarian streak, which boiled down denies the requirement of society to care for all members, and included in the left are those who feel that money is free, or freely taken from anyone who has it.

Right and left have oscillated in ascendancy, tax rates rising and falling but within bounds. And government has grown mightily, the right seeing social programs as appeasing “takers,” the left seeing a “safety net.”

Heated and continuous debates about the US. tax code for a hundred years have not deviated from the foregoing seven paragraphs.

Our code has evolved, but within narrow boundaries. In my lifetime we have seen only one authentic tax reform, in 1986. It took two years’ work by good people in both parties who trusted each other, and the work was done quietly and in Congress and without White House grandstanding.

Beyond that, in 1986 we had one absolute precondition for tax reform: The code was heavy with non-productive gadgets and giveaways. A trade was possible, cancel the exemptions and reduce brackets, all revenue-neutral. Since ’86 we have removed so many other exemptions and re-raised brackets that there is no deal available.

We have reached the entitlement end-game: preferably by means-testing, we must reduce the rate of future entitlement spending and increase revenue.