Editor’s note: This is the final installment in a three-part series focusing on the personal safety of real estate agents. The first article in the series focused on best practices to observe while conducting open houses. The second article examined statistics on violent crime and other on-the-job hazards in the real estate industry, and regulatory efforts to weed out criminals in the real estate licensing process. This article highlights lessons agents have gleaned from personal experiences.

A squatter in a million-dollar property. Hostile animals. A sex offender with a lengthy rap sheet. Robbers working in teams. These are just a few of the dangers real estate professionals interviewed by Inman News have encountered while on the job.

A survey from Moby, a company that develops personal safety mobile applications, found that 33.7 percent of survey respondents said they felt unsafe on the job “occasionally” and 2 percent said “frequently.” The rest said they “never” or “rarely” felt unsafe.

The company conducted an online survey of more than 450 real estate professionals in the U.S. and Canada between March and May 2011. Most respondents, 72 percent, were female, while 26 percent were male. Two percent declined to state their gender.

Split along gender lines, 42 percent of women said they felt unsafe on the job at least occasionally, compared with about 18 percent of men. 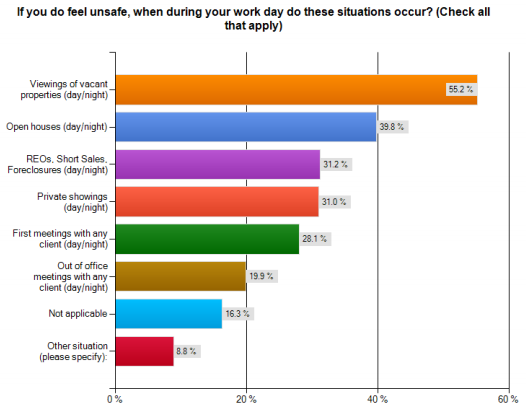 In a 2003 safety survey conducted by the National Association of Realtors, a quarter of respondents said they had been involved in incidents or harassing situations while on the job. Forty percent said they knew of other Realtors who had been involved in safety incidents or harassing situations while working.

Most respondents, 67 percent, said they worried about their safety on the job compared to 18 percent who did not have safety concerns while on the job.

About two years ago, Heather Embrey was holding an open house for a $1.6 million new home in Falls Church, Va., when she found food and dirty clothes in a basement bathroom. After confirming with the owners that the items did not belong to them, Embrey returned the next day with her husband to remove the items, but they were gone.

“As I turned around to advise my husband we could leave, a man came out of nowhere! The owners arrived at that time and a fight broke out. The police were called and they took the guy away. We found out later that this (guy) had been living there for months,” Embrey, an associate broker at McEnearney Associates, told Inman News.

Since her experience with the squatter, Embrey is more cautious about her own safety and that of her colleagues.

“If I stop by an open house or broker open towards the end and find an agent alone, I will offer to help close up the house,” she said.

“I try to always have someone with me when I preview vacant properties or at the beginning of an open house. I also have friends and family visit during my open house, just in case.

“When you think about it, holding an open house is dangerous. We actually advertise when and where we will be.”

Kathy Santillan, an agent and real estate consultant for First Team Real Estate in Fullerton, Calif., said she had something of a close call in late April at an open house she was hosting with another agent. While she and the agent waited for visitors on the front porch, a man and a woman approached them from behind after going up the back driveway and through the backyard.

“They caught us totally off guard. The man stunk of alcohol, and both had trouble making coherent sentences. I honestly am not sure what their intentions were, but an alarm immediately went off in my head that this was wrong,” Santillan said.

“My colleague walked with them through the house, which was fully furnished, while I stayed by the front door, held my pepper spray, and phoned my husband to let him know what was going on. As soon as (my husband arrived), the man and woman took off.

“It still makes me jittery when I think about it.”

Now she takes several safety measures to better protect herself while out of the office.

“I make sure to always let my family and the people in my office know where I am going to be and for how long. I also let neighbors around the home know I will be in the house and during which hours, carry pepper spray, and have my cell phone handy,” she said.

“When meeting a new potential client for the first time, always have them meet you at your office and introduce them to your broker and co-workers, or at a public place like Starbucks,” she advised.

“I also prefer to hold my open houses with another agent as an added precaution.”

Ines Eiras, a real estate consultant at Better Homes and Gardens Mason-McDuffie Real Estate in Pleasanton, Calif., agreed — not only because of personal safety concerns but because of the possibility of theft.

“A house that I held open was robbed of a laptop because a team came in to distract me. I was alone and they were a pair, working as accomplices,” she said.

According to the Moby survey, the three most common safety precautions respondents took involved keeping their colleagues, families or friends aware of their location. These include sharing their itinerary (73.3 percent), checking in repeatedly (42.8 percent), and attending appointments with a colleague, family member or friend (26.9 percent).

Lisa Ludlow Archer, a broker at Keller Williams Realty in Charlotte, N.C., recalled an incident from her early days as an agent: a man called for a showing while she was on floor duty and who, when she asked him to meet her at the office, said he was standing right outside the listing.

“I had this crazy feeling and actually went to the (national) sex offenders website to check him out. The rap sheet was a mile long. In fact, I called back to tell him that I had an emergency come up and then called my (broker in charge). Turns out, he had called seven other females in our office after I turned him down. Luckily, so did all of them,” Archer said.

“That encounter made me more wary of meeting people at a property. I now set appointments at our office first, or take someone else on my team with me, if necessary. My broker always asks that we meet at the office first, and if not, tell someone in the office where we are going and have them call us while we are there,” she added.

David Welch, a broker at Re/Max 200 Realty in Orlando, Fla., said that whether he meets potential buyers at the office or not depends on how they know about him: whether from the Internet, a referral, or a yard sign.

“About 80 percent of my business (in) the last two years has come from the Internet, and I will usually have them come into the office. Personal (referrals) are usually very solid. Sign calls can also be very good, but these are probably the calls where agents should be most careful.

“If it is someone interested in something other than real estate, they have been by the home and can see if it is vacant or otherwise a good location to commit their crime,” Welch said.

Carmelo Oliveri, broker-owner of Property Hub Realtors in Paramus, N.J., said safety is a “huge concern” at his brokerage. He advises his agents to meet new clients at the office, carry pepper spray at open houses, and document appointments on a Google calendar with details such as client names and the meeting location included.

He also has them contact a client’s mortgage representative to make sure the prospective buyer’s income, taxes and employment have been verified.

“If someone has mischievous intentions, they won’t go (to) the extent to have all (their) personal data verified,” Oliveri said.

Kimberly Dotseth, broker-owner of Green Box Homes in San Diego, carries pepper spray that looks like a fountain pen in her front pocket while she works.

“I do not believe in carrying a gun because I believe it could be used against me,” she said.

In April, she was at an open house running the water at the kitchen sink when she turned around and a man was standing right behind her.

“I think my somewhat militant reaction scared him off and he turned around and left without saying a word to me.”

In the Moby survey, the most common safety devices respondents carried while on the job were phones (95.5 percent). About 20 percent carried mace or pepper spray, while 7.5 percent carried guns. Less than 5 percent each carried knives, clubs or batons, or Tasers. About 2 percent took dogs with them for security. 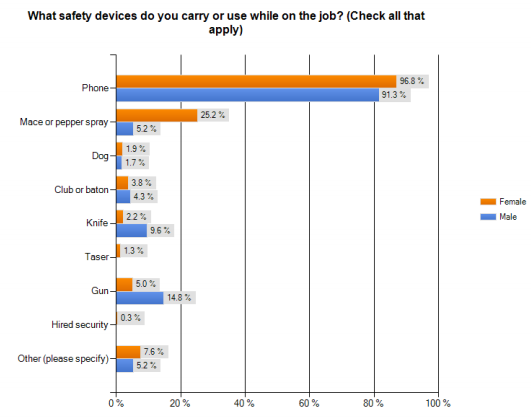 Safety instructor Andrew Wooten, who has worked with real estate professionals for 25 years, cautioned against advising all agents to carry weapons.

“A firearm is not right for everybody,” he said.

He added that pepper spray is illegal in some states. Some local governments also prohibit carrying a firearm outside the home.

An agent’s greatest weapons, Wooten said, are “your mind, your voice, your body. Because of (a need for) instant gratification, people are willing to spend $30 or $40 on something, but their greatest weapon is that little voice” that tells an agent when something is wrong.

Barrett Powell, a broker at Coldwell Banker Advantage in Raleigh, N.C., obtained a license to carry a concealed gun about six years ago. He said he wasn’t worried about threats from humans, but rather the threat posed by animals.

“Working in rural North Carolina, you are often called upon to walk remote property and large tracts of land. More than once I have found myself in the middle of many acres and confronted by either wild dogs or aggressive domestic breeds, with no way to protect myself and nowhere to go. (In my) last encounter I swore I would not be in that position again,” Powell said.

“I hope and pray I will never have to use my gun, and so far those prayers have been answered.”

Nevertheless, he would also not recommend that every agent carry a gun.

“But for those like myself who were brought up around firearms and respect them and know gun safety, it can be an added insurance policy,” he said.