Lawmakers have voted to restore loan limits for the Federal Housing Administration to pre-Oct. 1 levels, but the reprieve won’t apply to Fannie Mae and Fannie Mac.

House and Senate leaders signed off Monday on a conference report for a "minibus" appropriations bill that included language restoring FHA’s ability to insure loans of up to $729,750 in high cost markets through 2013.

Lawmakers have voted to restore loan limits for the Federal Housing Administration to pre-Oct. 1 levels, but the reprieve won’t apply to Fannie Mae and Fannie Mac.

House and Senate leaders signed off Monday on a conference report for a "minibus" appropriations bill that included language restoring FHA’s ability to insure loans of up to $729,750 in high cost markets through 2013.

Because the minibus appropriations package also contains a continuing resolution to avoid a government shutdown and continue federal operations until Dec. 16 — or until Congress completes nine remaining appropriations bills — lawmakers didn’t dally in approving it.

The ceiling on so-called jumbo conforming loans — raised in 2008 after the collapse of secondary markets for loans that don’t lack government backing — dropped, as scheduled, to $625,500 last month.

Last month, Senate lawmakers approved an amendment to the same spending bill approved today that would have restored through 2013 the $729,750 ceiling and 125 percent formula in high cost markets for FHA, Fannie Mae and Freddie Mac. But there were doubts that the proposal would fly in the Republican-controlled House.

The compromise plan hammered out Monday by a Conference Committee excluded Fannie and Freddie.

A summary of the "minibus" bill issued by House Appropriations Committee Chairman Hal Rogers, R-Kentucky, said the bill does not increase the limits for Fannie and Freddie, which have been "under public scrutiny for their questionable businesses practices and use of billions in federal bailout funds, some of which have been used for extravagant management bonuses."

FHA, the summary said, "is subject to greater congressional scrutiny and oversight."

FHA expects claims on defaulted mortgages to climb to new peaks during the next two years, but is unlikely to require a taxpayer bailout unless there’s another recession, according to assessments by independent actuaries.

If there is another recession, FHA could require $13 billion to $43 billion in taxpayer assistance to build up its loss reserves, depending on the severity of a second economic downturn, those studies show.

Dr. Joseph Gyourko, chairman of the real estate department at the University of Pennsylvania’s Wharton School, thinks those projections are overly optimistic.

In a paper published by the American Enterprise Institute for Public Policy Research, Gyourko predicts that even without an unexpected deterioration in housing markets, FHA will need $50 billion to $100 billion in taxpayer assistance.

In an annual report to Congress, the Department of Housing and Urban Development (HUD) maintains that loans insured after the first quarter of 2009 are generating profits that will allow FHA to build its capital reserves back up to statutory minimums by 2014.

But the report acknowledges that the loan guarantee program is facing a massive backlog of claims on loans insured during the housing boom, particularly those made with seller-financed downpayment assistance.

"FHA has not yet seen the peak of claim expenses from this national housing recession," Secretary of Housing Shaun Donovan said in the report.

Although the robo-signing scandal has slowed down claims, Donovan said, there will soon be a day of reckoning for loans now stuck in the foreclosure pipeline.

"Current expectations are that claims could come in very large numbers this next fiscal year and, as a result, capital resources decline significantly over (fiscal years 2012-2013) as loss reserves are expended," Donovan said.

In fiscal year 2011, which ended on Sept. 30, FHA had a $2.2 billion cash flow deficit as it collected $7.6 billion in premiums and $6.1 billion on sales of foreclosed homes but paid out $14.9 billion in claims and racked up $1.1 billion in property maintenance expenses.

Projections show that even if an economic recovery remains on track, FHA will have a $19.5 billion deficit in fiscal year 2012, which begins Oct. 1, as claims rise to $35.7 billion, outstripping revenue from insurance premiums ($8.7 billion) and sales of foreclosed properties ($7.5 billion). 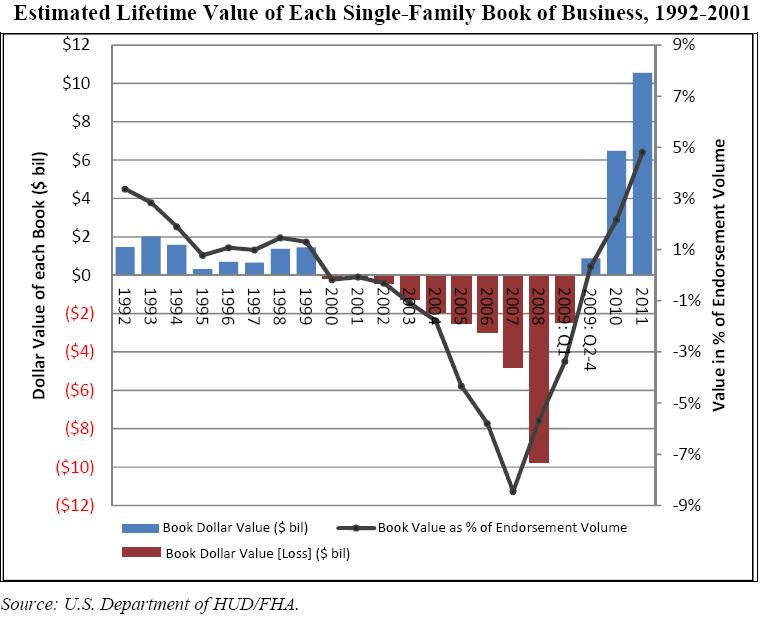 That dramatic increase in claims — nearly equal to the $37 billion FHA paid out in the past three years — will put a serious dent in FHA’s $32.4 billion in net capital resources. In the event there is not another recession, FHA’s net capital resources are projected to bottom out in fiscal year 2014 without dipping below $10 billion.

But Gyourko argues that actuaries have overestimated the value of FHA’s Mutual Mortgage Insurance Fund, in part because they have made overly optimistic assumptions about expected declines in default rates.

Previous studies failed to acknowledge that borrowers who used the federal homebuyer tax credit to fund down payments pose a higher risk, he said, and underestimated the amount of negative equity on homes backing FHA’s mortgage insurance portfolio.

"Rather than requesting that Congress strengthen its capital resources as the housing bust deepened, FHA decided to pursue a strategy of growing out of its problems beginning in 2008," Gyourko said in his paper.

While FHA’s total insurance-in-force has more than tripled from $305 billion at the end of the 2007 fiscal year to just over $1 trillion, FHA has not increased its capital resources proportionally, he said.

"Unless one believes that the risk of the mortgages it insures has declined substantially, FHA has become a much riskier organization," Gyourko concludes.

But FHA does believe the mortgages it’s insuring today are much less risky than many of those it guaranteed during the boom.

Losses on loans insured through the first quarter of fiscal year 2009 are expected to reach $26 billion within a few years, Donovan said. Net losses on seller-funded downpayment assistance loans — banned in 2009 — grew by $1.8 billion over the past year to $14.1 billion, he said.

But lower default rates and higher premium charges on loans FHA has insured since then will boost the economic value of the MMI Fund by $18 billion, Donovan said. The mortgages FHA expects to insure next year alone will boost FHA’s bottom line by an additional $9 billion.

The FHA’s mortgage insurance program has been self-sustaining since it was created in 1934 during the Great Depression. Although the program faced similar challenges during the 1980s, borrower premiums have always covered claims.

Even as HUD projects that the more profitable loans FHA is insuring today will help the mortgage insurance program squeak through the downturn without taxpayer assistance, it’s also expecting to insure fewer loans going forward.

The Obama administration has said it wants to see the government gradually reduce its role in mortgage lending to make way for the return of private capital. 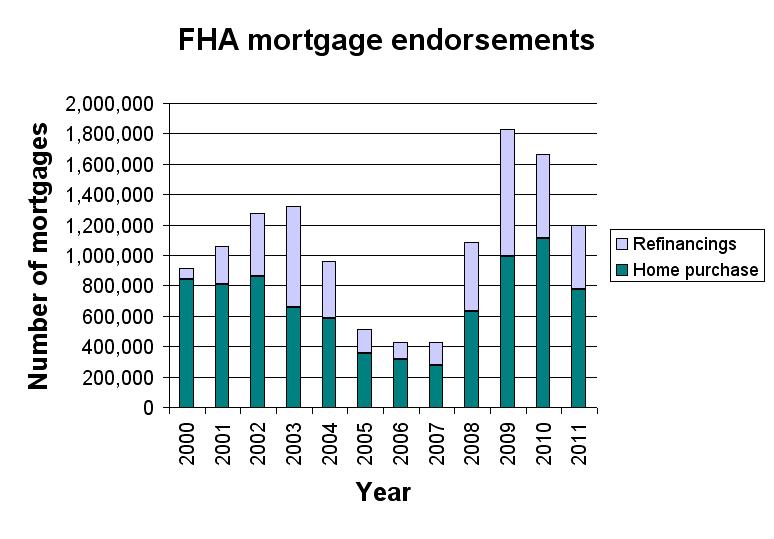 FHA raised mortgage insurance premiums three times in 2010, and "We are already seeing signs that premium rate increases we have put in place are causing a shift of some business back to the conventional mortgage market," Donovan said.

Homeowners can obtain conventional mortgages backed by Fannie Mae and Freddie Mac with down payments of as little as 5 or 10 percent by purchasing private mortgage insurance.

Another change that could also dent FHA’s market share was the reduction of FHA loan limits in 669 counties on Oct. 1. HUD estimates that about 3 percent of the loans insured by FHA in 2010 — 33,300 mortgages — would have been ineligible under the new limits. 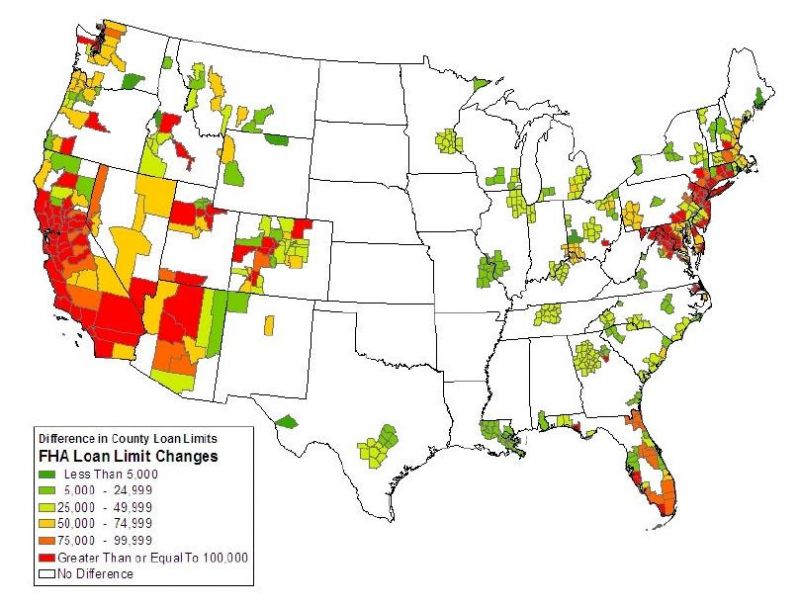 Mortgage Bankers Association Chairman Michael Young said it’s not surprising that FHA’s financial reserves are under stress, given the "persistent troubles in the economy and real estate markets" and FHA’s mission of providing access to home loans for lower-income and first time homebuyers.

With its low, 3.5 percent minimum down payment requirement, 75 percent of the purchase loans FHA guaranteed in 2011 were for first-time homebuyers.

"FHA plays an important countercyclical role in the housing market, with its greatest contributions coming during those times of market stress, like those we have seen in recent years," Young said in a statement. "Without FHA’s support, our housing market would be in far worse shape than it is today."