As the long-lived debate over listings syndication heats up, real estate search and valuation site Zillow is among the online portals that have drawn criticism from real estate industry professionals.

Two multiple listing services have discontinued their agreements approving real estate technology company Diverse Solutions as an Internet Data Exchange (IDX) provider for their members due to Zillow’s acquisition of Diverse Solutions in November — but for different reasons.

And in unrelated incidents, two Orange County, Calif., real estate professionals have reported that their listings on Zillow had been wrongfully claimed by other agents.

The Santa Barbara Association of Realtors, which owns the Santa Barbara MLS, decided to cut ties with Diverse Solutions after receiving a notice that Zillow had acquired the company.

"The (Diverse Solutions IDX) product is actually a fine product, it’s just that they sold to Zillow," said Laurel Abbott, the association’s president-elect and a board member. Abbott is also chair of the association’s multiple listing service committee.

"Zillow is not a friend to organized real estate, so we’ve voted not to support (the company). There were concerns of misuse of our data. (The Zillow website) is grossly inaccurate. (The site overinflates) what our (for-sale) numbers are (and) includes information from properties that have sold months ago. It’s not an accurate site," she said.

He added that the company was "disappointed with (the association’s) decision and (we) think that it’s simply not in the best interest of real estate agents or consumers."

IDX (Internet Data Exchange) is the system used by participating brokers to display each other’s listings on their own websites. IDX listings are administered by MLSs and can be displayed only on approved MLS, broker and agent websites.

In an email to members Monday, Denver-area MLS Metrolist announced that members had until April 2 to find a new IDX vendor, when the MLS’s IDX feed to Diverse Solutions would end.

Zillow’s recent purchase of the company invalidated its agreement with Metrolist, said Melissa Olson, spokeswoman for Metrolist, adding that real estate professionals in the Denver area had a plethora of IDX products to choose from.

"As companies in our market are purchased or sold, we evaluate every contract individually. It’s just that we have a lot of quality vendors that are already here. We have probably close to 100 IDX vendors in our market today," Olson said.

"We want to bring the best products and services to our customers in our marketplace. This is not in any way, shape, or form a commentary on Zillow," she added.

Only about 40 of its 14,000 members have IDX websites powered by Diverse Solutions, Olson said. In its email to members, Metrolist provided a list of approved IDX vendors and instructions for changing their IDX provider.

The decision does not impact Metrolist’s listings syndication practices, Olson said — the MLS sends listings to Zillow via syndicator ListHub and will continue to do so. ListHub is owned by Realtor.com operator Move Inc.,  which has also received push-back from some brokers who choose not to syndicate listings to Realtor.com, among other major real estate portals.

As with the Santa Barbara MLS, Bueno said Diverse Solutions was "disappointed" by Metrolist’s decision.

"This was not our decision and we have asked them to reconsider, as it’s not the best interest of real estate agents or consumers. We’ll continue work with current Metrolist customers and offer them all of the support we can," Bueno said.

He added that Diverse Solutions’ IDX agreements with MLSs "remain the same after our acquisition as they were before."

In a page for the Facebook group "Tech Support for Real Estate Agents," Denver-area real estate broker Steve Scheer, who described himself as a "very longtime and happy Diverse Solutions customer," said the decision was "a big problem and headache for those of us (who) will now need to spend a ton of time on this — not to mention likely incurred cost to change IDX along with setup fees and such."

"I don’t know if this decision from Metrolist comes from fear or fact, but the forced inconvenience to myself and other DS users is a fact that I can’t see is in the best service to us as paying Metrolist subscribers. I certainly hope that a reversal would occur very soon before we have to take action on this," Scheer said.

According to Bueno, other than Santa Barbara MLS and Metrolist, no other MLSs have pulled Diverse Solutions’ IDX product after Zillow’s acquisition. He declined to say whether the client list for the product had shrunk or grown overall since the acquisition.

Also making the rounds in social media this past week were complaints from two Orange County real estate professionals who said agents other than themselves had claimed their listings at Zillow.com.

Raj Qsar, principal and owner of Premier Orange County Real Estate, a boutique firm affiliated with TNG Real Estate Consultants, told Inman News a local agent had claimed one of his listings a few days ago as well as the listings of at least four other agents in the Orange County area — including two others from his office. He called the practice "social sabotage."

"It is the real-life equivalent of me pulling out another agent’s for-sale sign in a front yard and replacing it with my own," Qsar said.

Qsar said he received an email from Zillow notifying him that someone had claimed his listing. He then reclaimed the listing and informed Zillow of the problem, he said. 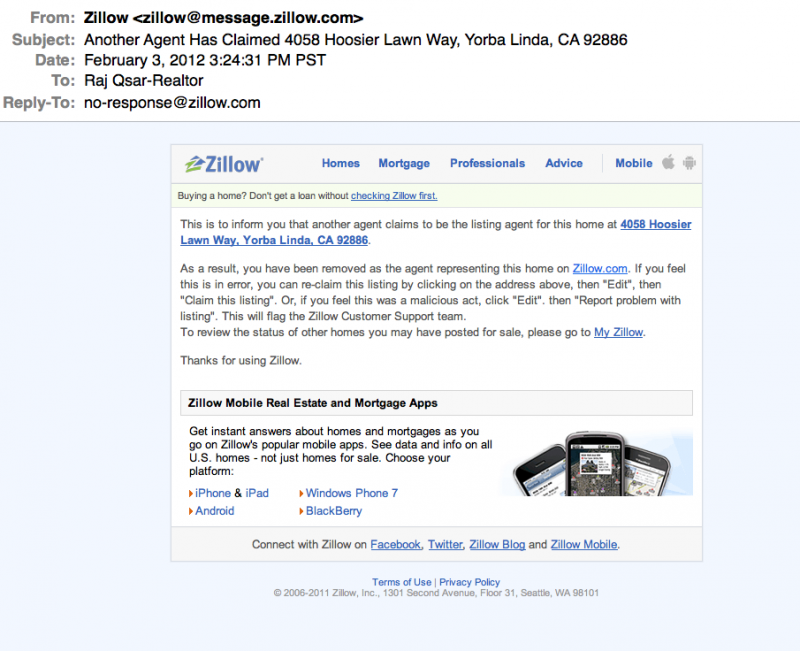 Linsey Planeta, another Orange County real estate professional, last Wednesday wrote about a similar incident on her blog. Planeta is a broker associate at M Realty.

"Once I have listed a property, I provide the links to many of the places the seller can now find their property online. While in the course of this little project, I find our listing on Zillow. Just one problem — someone else is noted as the listing agent. I know about the ‘Premier Agents’ (who) are listed next to my listing. No big deal. But someone else is the ‘listing agent’? I don’t think so," Planeta wrote.

"Zillow was very responsive when I called … (and) immediately ‘reclaimed’ the listing for us. But, of course I wondered, how does this happen? Who is responsible for policing this? How often does this go on?"

Zillow spokeswoman Cynthia Nowak told Inman News that "agents claiming another agent’s listing on Zillow is very rare, but it can happen.

"We have an entire team dedicated to listings support, and errors get fixed immediately," she said.

"Zillow also has safeguards in place to catch listings fraud. For example, anytime a listing is changed, an alert email goes out to the listing agent just like when you change a password on a bank account. This happens whether the listing agent is a Zillow Premier Agent or not, or even registered on Zillow, as every listing is associated with an email address," Nowak said.

"Once we are alerted to fraudulent activity, we contact the (offending) agent’s broker or Realtor board, and, if the issue isn’t resolved, we will pursue legal action (sue) to ensure listing agents are protected on Zillow."

"We would ban an offending agent" from Zillow, she added.

Planeta alleged Real Estate eBroker Inc. had claimed her listing. Gin Kazla, the firm’s broker, said his company has more than 1,500 agents in California and he was unaware of the incident.

"All marketing materials have been approved by the broker according to company regulations — however, I am not aware of any direct marketing to Zillow," Kazla said.

In the comments to her post, Planeta asked Zillow’s chief revenue officer, Greg Schwartz, who responded to her post with comments similar to Nowak’s, why a listing from an MLS feed needs to be claimed when that listing already has the listing broker named.

"Why is this feature allowed? Seems to me that claiming a listing as your own should require a few more hoops and some type of verification process. And, from what I’m gathering in conversation, this is not an isolated incident," Planeta said.

"So, in addition to appearing as the listing agent at the bottom of the page, the agent receives four free placements on the page instead of one," she said.

In response to what Nowak called the recent "confusion" about what Zillow does for listing agents, Schwartz wrote a blog post Friday addressing the topic. He cited free leads for listing agents that claim their profile on Zillow, virtually unlimited free photos on listings, and "visible and easy access" to a listing agent’s contact information on a listing, among other benefits.

Regarding the quality of listings data, Schwartz wrote, "We process all feeds at least once per day, giving priority to MLS and broker feeds over other sources.

"We have a team of compliance experts and technologists working hard to provide a higher-quality listings search experience and are committed to delivering accurate, up-to-date listings drawn from definitive sources. Direct listings from brokers and MLSs ensure the highest-quality consumer experience."