The use of rudimentary containers to ship cargo began in the late 17th century. By the 1950s, Malcolm McLean of Sea-Land Shipping, pushed by the U.S. military to standardize their design, was building strong, uniform, theft-resistant, stackable shipping containers that were easy to load and unload by truck, rail and ship, and easy to store.

In 2005, an estimated 18 million containers made a combined total of about 200 million trips. Many containers measure 20 feet or 40 feet in length, and a 40-foot-long shipping container offers 304 square feet of floor space.

A trade imbalance has led the containers piling up around U.S. hubs, and storing them increases the cost of doing business.

One response to the problem: Re-engineer the containers. As architects and designers around the world evolve and refine creative reuse, containers are reshaping as disaster-relief shelters, coffee shops, student housing, custom homes, retail towers, even storing physical books after they are digitized. 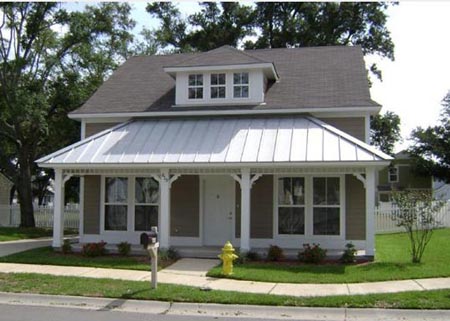 The U.S. military, for example, has deployed “Containerized Housing Units,” or CHUs (pronounced “SHOOS”): Army and private military contracting companies use the converted shipping containers to house troops, contractors and others. 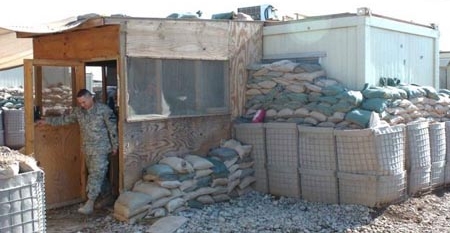 The units offer hard floors, windows, air conditioners, beds for up to three people, and some are outfitted with refrigerators.

According to the U.S. Army Environmental Command, the first multistory commercial structure built of recycled steel containers on a U.S. Army base opened in Fort Bragg, N.C., in April 2008. 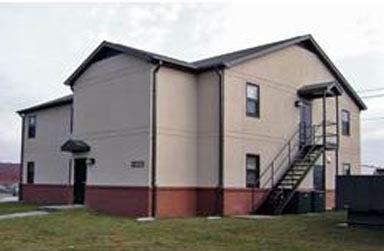 Living in former shipping containers may have begun as a fringe novelty, but it is far from such these days. Many entrepreneurs are exploring new niches amid the growing assortment of shipping container-based structures.

Alex Klein of Container Home Consultants Inc. has been involved in shipping container conversions for 30 years, while Heather Levin said she appreciates container homes after noticing how much of her hard-earned dollars went to a bank as mortgage loan interest.

That company reports that its modified shipping containers are “eco-friendly, (energy-efficient), hurricane-resistant, pest-free, affordable and green.” The company offers units in sizes ranging from 480 square feet to 1,280 feet, and prices starting at $89 per square foot. That does not include excavation site work and foundations. The company offers turnkey packages and ships throughout the U.S.

An Argentinian-born woman living in California identified by faircompanies.com as “Lulu” (no last name given), was reportedly forced by the recession to downsize, and found and modified a free shipping container. She took a couple of months to gather mostly recycled components to remodel the unit, faircompanies.com reported, and it took another month to convert the original 360-square-foot space into a home for herself and her small daughter.

With hot water on demand from a small camping device, and camping stoves for cooking, Lulu noted that her home features a separate bathroom and second bedroom, and she plans to add a teahouse and a greenhouse.

See a video of Lulu in her container home: 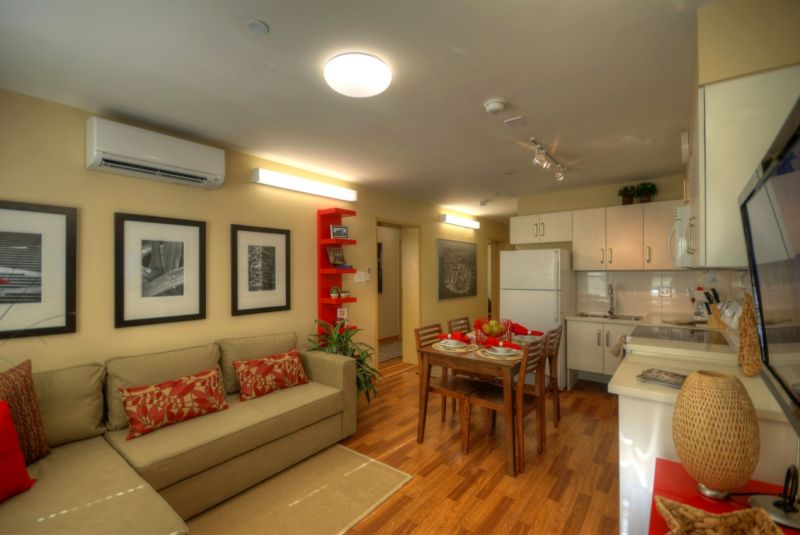 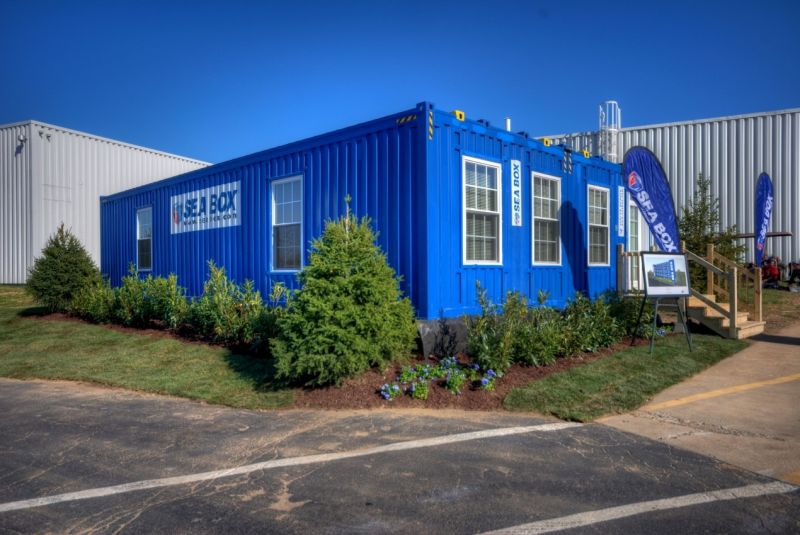 “For multifamily housing, we can deliver and erect a four-story, 16-unit apartment building, fully furnished and move-in ready, in three days,” according to Robert A. Farber, director of contracts and counsel for Sea Box.

“All of these living quarters will last more than a hundred years, are impervious to pest infestation (termites can’t bite through steel), and can withstand hurricane-force winds that would destroy conventional housing,” he also said in an email message, adding that the company bid for a job to potentially supply tens of thousands of housing units built from shipping containers to New York City in the event of a major natural disaster.

The company offers a range of designs, he said, “including offices, laundry facilities, machine shops, personnel shelters, and even a giant movie screen: 90 feet high.”

Sea Box structures have also been used by the U.S. military in Iraq, Afghanistan and other nations, he said, and “We’ve sold two-story container configurations, which individually house 2,000 computer servers used to power the search engine Bing.” 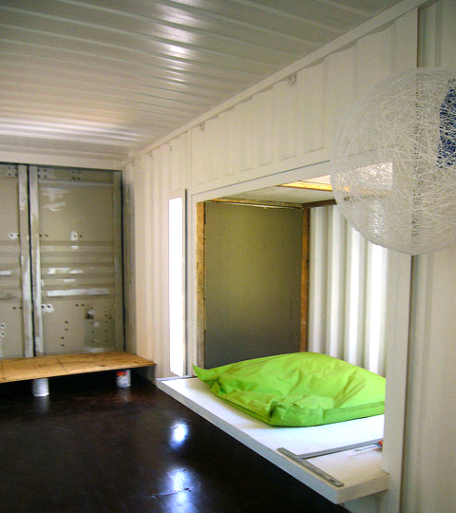 The interior of a container home in Houston, Texas. The home was designed by architect Christopher Robertson and Numen Development. Flickr/joguldi 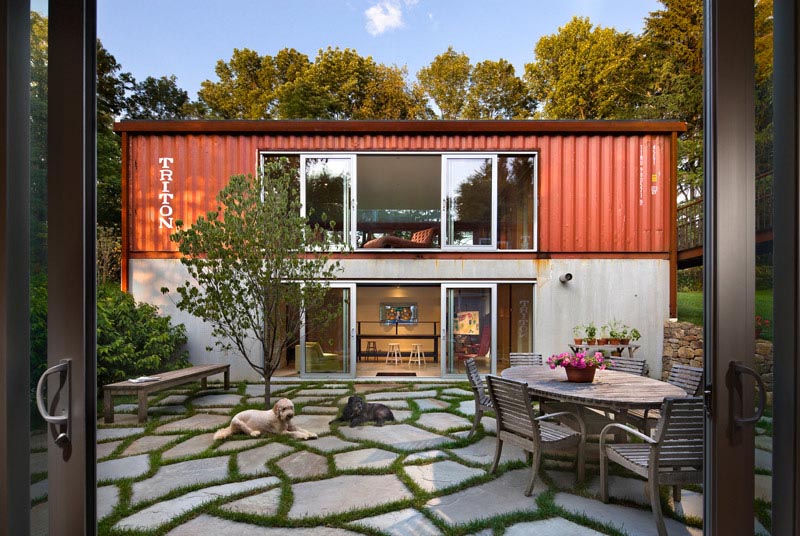 A two-story container home in New Jersey, designed by architect Adam Kalkin and completed in 2008. Photo courtesy of Architecture and Hygiene. 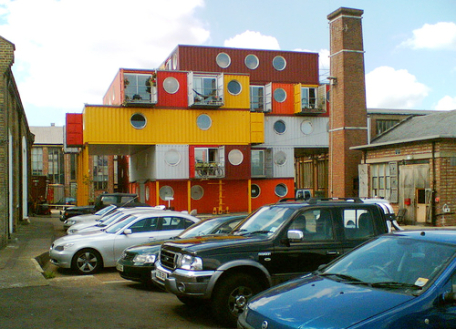 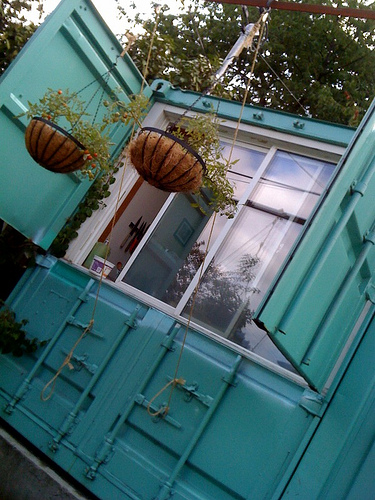 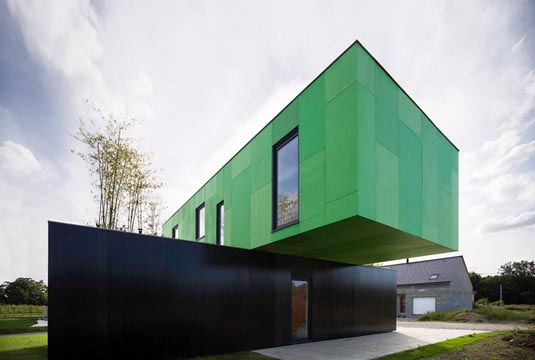 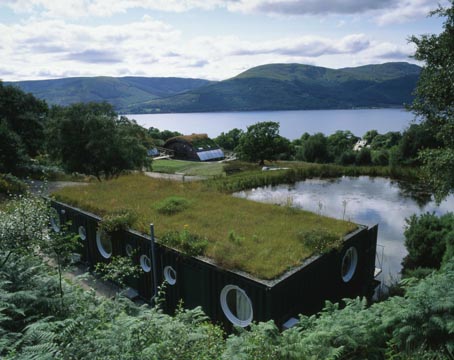 This container home, Cove Park in Peaton Hill, Scotland, was designed by Urban Space Management and completed in 2002. Photo courtesy of Container City. 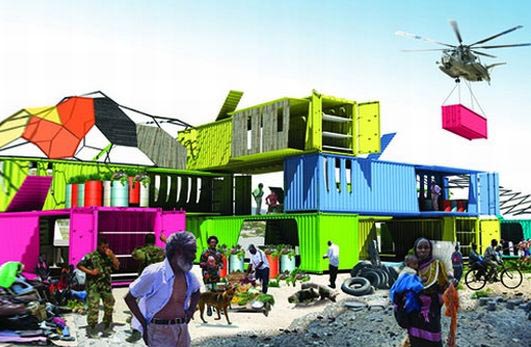 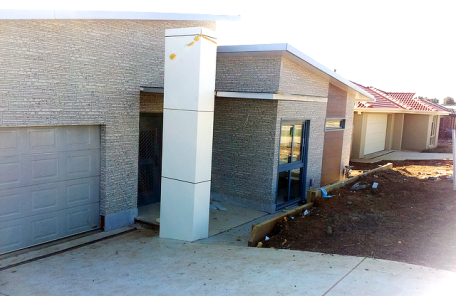 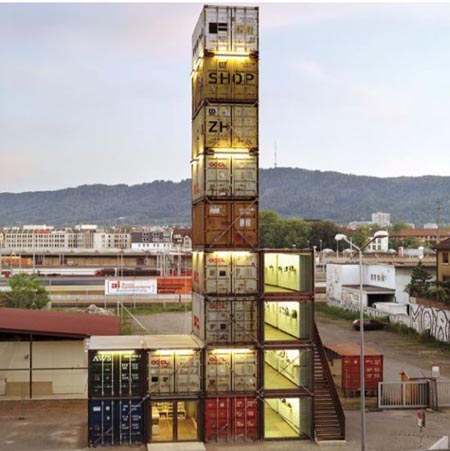