Growth in home sales appears to be driven by the willingness of sellers to lower their prices rather than a broad-based increase in demand and buyer confidence, according to an analysis by real estate data and analytics firm Radar Logic Inc.

In "Housing is a Buyer’s Market," the company analyzes price and sales trends in the nation’s 25 largest metro areas.

Growth in home sales appears to be driven by the willingness of sellers to lower their prices rather than a broad-based increase in demand and buyer confidence, according to an analysis by real estate data and analytics firm Radar Logic Inc.

In "Housing is a Buyer’s Market," the company analyzes price and sales trends in the nation’s 25 largest metro areas.

Sales of nondistressed properties increased last year, but that increase was accompanied by a decline in prices — lowering the price spread between distressed and nondistressed sales, the report said. 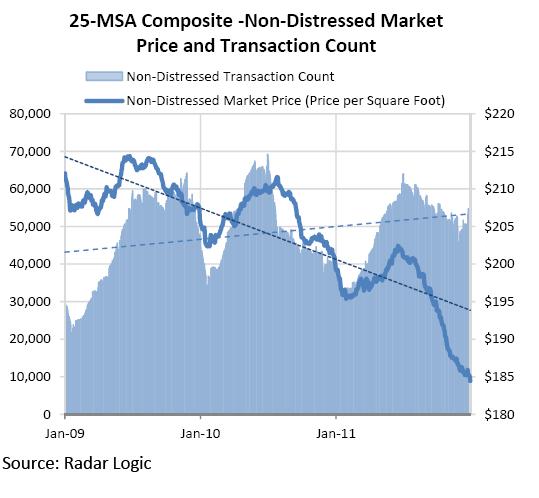 "Insofar as sellers are willing to accept lower offers, housing is currently a buyer’s market," the report said. "Unfortunately, difficulty in accessing financing and concerns over inventory are preventing buyers from entering the market in force."

Although the National Association of Realtors reported that there was only a 6.1 months’ supply of existing homes for sale in January — the lowest level of inventory since 2006 — that doesn’t take into account vacant homes held off the market, homes securing delinquent mortgages and in the foreclosure process, and homes with underwater mortgages, the report said.

On top of the 2.31 million existing homes that were officially up for sale in January, the report noted that at the end of 2011 there were an estimated 3.6 million vacant homes held off the market, 2.1 million homes in the foreclosure process, and 1.8 million homes whose owners are behind on their mortgage payments by 90 days or more.

The estimate of vacant homes is from the Census Bureau, while homes in foreclosure and 90-day delinquencies estimates are from LPS Applied Analytics.

Many of those homes are undoubtedly among the 11.1 million homes that another data analytics firm, CoreLogic, has estimated are "underwater." Owners of those properties owe more on their mortgage than the homes are worth, putting them at a higher risk of foreclosure.

"Given the number of homes in each of these categories of potential inventory, the figure of 2.31 million existing homes for sale probably understates the current supply overhang by millions of homes," the Radar Logic report concluded.

All of that potential housing inventory doesn’t need to be put up for sale to weigh on home prices, the report warned.

"The mere perception of a large supply overhang reduces buyer confidence that home values will rise in the near future, and feeds fears of further declines," Radar Logic warned.

In its latest national foreclosure report, CoreLogic estimated that there were 1.4 million homes in the foreclosure process — about 700,000 fewer than the LPS estimate cited by Radar Logic.

CoreLogic’s numbers showed the number of homes in the foreclosure process during January was down 9.5 percent from a year ago, or about 145,000 homes.

But among the 100 largest markets by population, 32 showed an increase in the foreclosure rate in January 2012 compared to a year ago.

During the previous 12 months, CoreLogic estimated there were 860,128 completed foreclosures, and 3.3 million since September 2008.

Looking ahead, the percentage of borrowers who were more than 90 days late on their mortgage payment nationwide, including homes in foreclosure, was unchanged from December at 7.2 percent. But that was an improvement from the 7.8 percent serious delinquency rate at the same time a year ago. 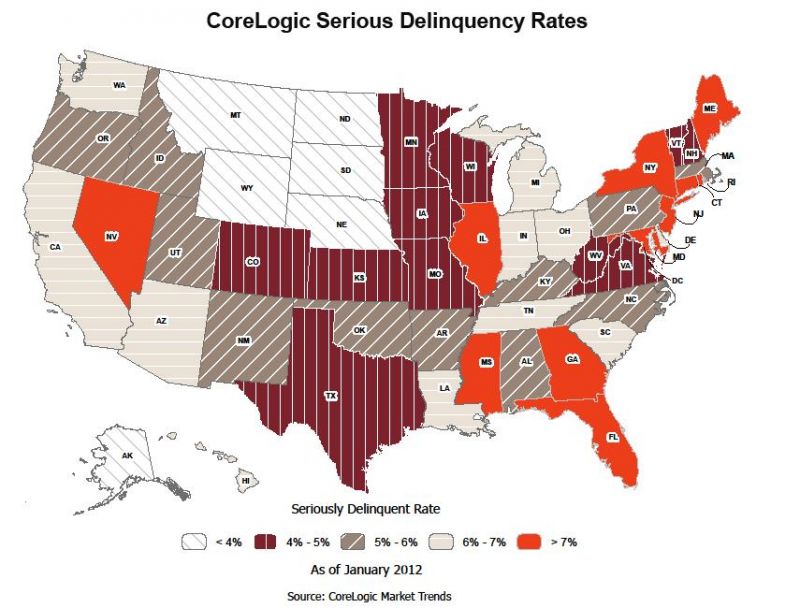 In another report out this week, economists at the Federal Reserve Bank of Cleveland found evidence that appraisers, lenders and investors are overestimating the value of foreclosed homes — particularly older properties in poor neighborhoods.

If the problem is due to inaccurate valuations — rather than an intentional strategy by banks to take foreclosed properties into their real estate owned (REO) inventories instead of selling them at auction — lenders may be missing out on opportunities to sell homes to investors and approve short sales and loan modifications, the report suggested.

In "Overvaluing Residential Properties and the Growing Glut of REO," economists Thomas J. Fitzpatrick IV and Stephan Whitaker analyzed more than five years of sales in Cleveland and surrounding Cuyahoga County, which they characterized as "a relatively weak housing market."

They found that investors purchasing properties at foreclosure auctions ended up reselling them for an average 26.5 percent less than they paid at auction.

Lenders did even worse when they set their auction reserve prices too high and ended up repossessing homes and selling them out of their REO inventories.

When there were no takers at foreclosure auctions, federal agencies got 30 percent less for REO properties than the auction reserve price they’d set.

Lenders got only 42 percent of the auction reserve price when there were no bidders at auction, and they ended up repossessing homes and selling them from their REO inventories.

The problem was most pronounced for homes with reserves below $50,000, suggesting that the issue "is not inadequate inspections of individual homes, but possibly misunderstanding entire market segments," the report concluded.

Lenders appeared to "grossly overestimate the value of homes constructed before 1941," and were more likely to set auction reserve prices too high in medium- and high-poverty census tracts.

The longer it took lenders to resell properties they repossessed, the greater the losses.

At least 1 in 4 homes sold after a year in REO inventory were total losses, selling for 90 percent less than the original auction reserve. The median loss on homes held by lenders for five quarters was about 80 percent of the auction price.

It’s possible that lenders are intentionally setting minimum auction bids too high because they want to take control of a home at auction in the hopes that they can get a higher price for it later, the report noted.

There may be other incentives for lenders to overvalue foreclosed properties. Shifting accounting losses from loan portfolios to REO portfolios could help lenders pass solvency tests, the report said.

But the most likely explanation is that lenders may be overvaluing properties because their valuation methods don’t work well in weak markets, the report concluded.

That’s because the Cleveland Fed’s analysis showed that it’s not only lenders that overestimate the value of properties acquired in sheriff’s sales, but all parties, including federal agencies and investors.

"Regardless of why it is occurring, correcting the systematic overestimation of property values in weak housing markets appears to be relatively simple and has large potential ramifications," the report concluded.

If lenders placed more weight on property characteristics like the age of the home and its location in their value estimates, they could avoid repossessing homes in the first place by setting lower auction reserves.

Lenders would also be better at identifying properties that have the least value early in the foreclosure process, and in some cases might conclude that they would be better off deeding them to land banks, local governments, or community development corporations.

"Transferring REO property to organizations dedicated to disposing of it lowers lenders’ carrying costs for distressed properties that could have lingered in REO, hastens blight removal, and helps stabilize distressed housing markets," the report concluded.