The GoodLife Team — a small, independent real estate brokerage based in Austin, Texas — has stopped syndicating its listings and canceled its advertising on real estate search and marketing site Trulia, citing ads for competing agents appearing next to their premium listings.

The GoodLife Team — a small, independent real estate brokerage based in Austin, Texas — has stopped syndicating its listings and canceled its advertising on real estate search and marketing site Trulia, citing ads for competing agents appearing next to their premium listings.

"Effective Monday, we signed all of our cancellation papers, we desyndicated from Trulia, and GoodLife Team homes for sale will no longer appear there. I believe this is the best move for us as a brokerage to take care of our sellers," Miller said in the video.

"Fundamentally, what Trulia did there and why we decided to pull out was they broke our brand promise to our sellers," Miller said. "Our brand promise is that we’re going to do everything in our power to market their home for sale in ways that are effective and that we’re going to track all of the inquiries and make sure that everyone that inquires about their home gets appropriate follow-up and is well taken care of for the purpose of selling their home."

Miller and the GoodLife Team’s broker-owner and CEO, Krisstina Wise, are contributors to InmanNext, an Inman News site focused on real estate agents.

Trulia spokesman Ken Shuman said he thought the move was "a big disservice to consumers."

"We think consumers, when interviewing a broker or an agent, should know that their homes will be on the biggest real estate sites, not just ours," he said.

"If I have my home for sale, I want it to be seen by as many people as possible," Shuman said. "If I’m getting ready to list my home (and) it’s not on Trulia, Zillow or Realtor(.com), I’m not going to list with you. So to be honest with you, it kind of feels like they’re shooting themselves in the foot."

The GoodLife Team joins Minnesota-based Edina Realty and San Diego-based broker ARG Abbott Realty Group, which announced in November and January, respectively, that they would be pulling their listings from third-party real estate search sites. Both brokerages had expressed concerns about the advertisements and lead forms for other brokers’ agents that sometimes appear next to listings on national listing sites.

Edina Realty, a HomeServices of America Inc. subsidiary, has continued to provide listings to Realtor.com, and last month was still in negotiations with the site’s operator, Move Inc.

If agents have not "claimed" listings on Trulia, they may be accompanied by "Trulia Pro" lead forms that generate leads for agents who work for competing brokerages. The lead forms appear at the bottom of a listing, inviting homebuyers who want more information about a property to contact up to four agents.

Brokers and agents can also purchase dynamic Trulia Local ads, which appear higher up on listing detail pages and can spotlight agents’ listings and link back to their websites.

According to Miller, the GoodLife Team had upgraded to a broker advertising package with Trulia in May 2011. The site had been the brokerage’s best third-party source of online inquiries from consumers for well over a year, he said.

But inquiries from Trulia began dropping off in August and September and did not recover, Miller said. Last week, he said, the brokerage discovered that Trulia was running ads for other agents in the same ZIP code on the GoodLife Team’s premium, branded listings.

"So we’re already an advertiser and now they’re running other agents’ photos and contact information … right below our contact form on all of our homes for sale," Miller said.

"When we saw this, we immediately contacted Trulia, and asked that the ads be removed. We were immediately told that this was not possible, and after escalating through several levels of support it became clear that this was the policy of Trulia — that other agents’ ads would be allowed to run on already existing advertisers’ homes," Miller told Inman News.

"This advertisement makes it appear as if this agent is part of our company, and if people inquire on our seller’s home, we cannot keep our promise to follow up and sell the home. Further, Trulia’s traffic has really fallen off, and we speculate that the cannibalization of the traffic is part of the cause.

"We may be friends with Trulia again, only if they remedy this problem. We are taking a stand about this for the industry because we don’t believe this practice is good for the customer, our home seller, or for our brokerage and agents."

Shuman said Trulia did not plan to make any changes to entice the brokerage to come back to the site.

He added that Trulia had been offering agents advertising packages that allowed them to promote themselves in specific ZIP codes since early to mid-2010.

"So it’s been something we’ve had for a couple of years now and nothing has changed on it," he said. 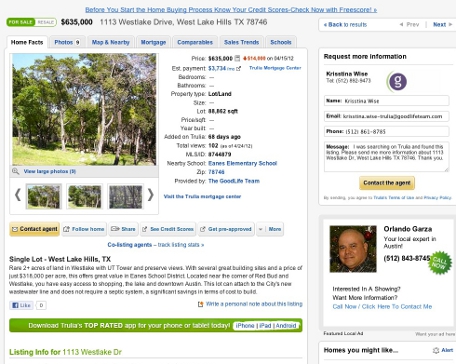 Screen shot of a GoodLife Team listing on Trulia showing an ad for a competing agent.

Shuman declined to comment on whether other agents had raised objections similar to those of the GoodLife Team.

The GoodLife Team had had about two dozen listings on Trulia as of last week. Miller said inventory was down in the Austin market and that the brokerage typically handled at least twice the number of listings at this time of year.

According to figures provided by Miller, consumer inquiries — both calls and through online contact forms — from Trulia fell from 41 in first four months or so of 2011 to 12 during the same time period this year. Meanwhile, the GoodLife team claims, leads from other portals remained about the same or increased. 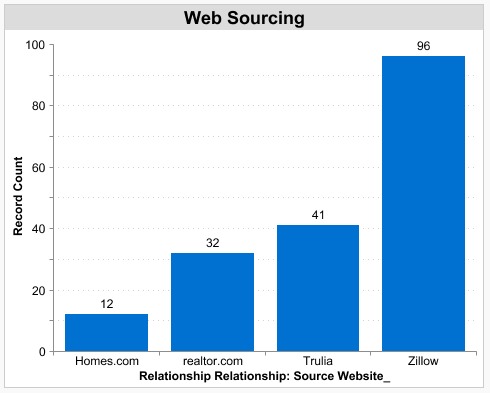 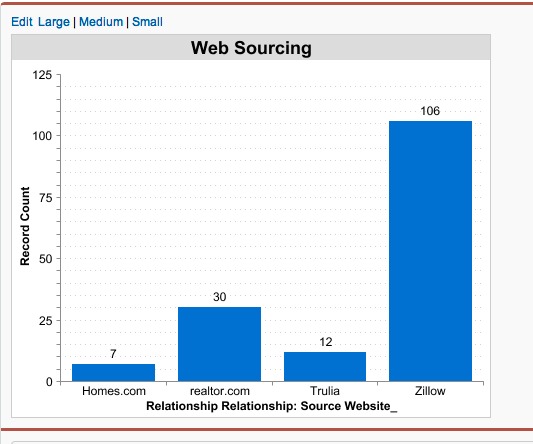 This week, Trulia plans to roll out a mobile ad platform for real estate professionals. The site’s mobile traffic grew more than 250 percent year over year in March, and 30 to 35 percent of the site’s traffic is from mobile devices on weekends, Shuman said.