After experiencing a slight dip this year, home prices will see modest increases starting in 2013 and through 2016, according to a quarterly survey of more than 100 economists, real estate experts and investment strategists.

The survey, conducted by research and consulting firm Pulsenomics LLC on behalf of real estate search and valuation portal

After experiencing a slight dip this year, home prices will see modest increases starting in 2013 and through 2016, according to a quarterly survey of more than 100 economists, real estate experts and investment strategists.

The survey, conducted by research and consulting firm Pulsenomics LLC on behalf of real estate search and valuation portal Zillow between May 31-June 14, 2012, asked 114 participants to project the path of the S&P/Case-Shiller U.S. National Home Price Index over the next five years.

When last published May 29, the index showed that national home prices in the first quarter hit a record low, declining 1.9 percent from first-quarter 2011. Prices were down 35.1 percent from their second-quarter 2006 peak, to levels last seen in mid-2002.

The panel of experts surveyed by Pulsenomics said they expect the index, which covers all nine U.S. census divisions, will show a 0.4 percent annual decline at the end of 2012 and then increase by 1.3 percent in 2013. Their projections are more or less similar to what they were in the last quarterly survey in March. 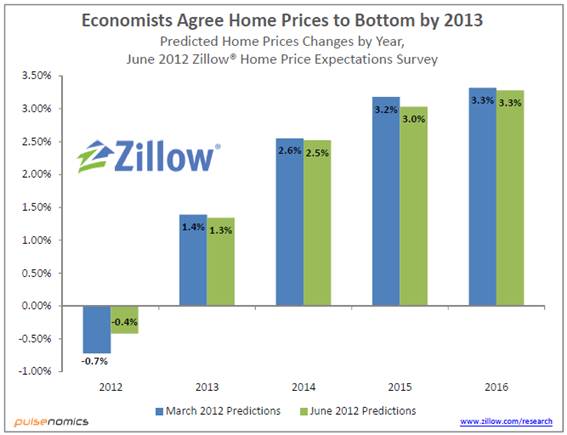 The economists surveyed largely agreed on the trajectory of national home prices for first-time in the history of the survey, which dates to May 2010, Zillow said. The most optimistic quartile of panelists predicted an average 1 percent increase in home prices this year, while the most pessimistic expected a 2 percent decline. Most agreed that after the first quarter’s decrease, home prices will rise for the rest of 2012, Zillow said.

Nonetheless, 56 percent of respondents believe the national homeowership rate in five years will be lower than the rate in the first quarter: 65.4 percent. One in five projected the rate would be at or below 63 percent. The lowest rate on record is 62.9 percent, hit in 1965.

"It’s good to start to see some convergence of expectations among economists, as it lends further support to the claim that a bottom is real," said Stan Humphries, Zillow’s chief economist, in a statement.

"However, the fact that more than half of respondents believe that the homeownership rate will fall lower should be a sobering reminder that significant challenges remain ahead for the housing market, from negative equity to millions of foreclosed homeowners who now have impaired credit, making a return to homeownership harder than it would be otherwise."

When compared to economists’ projections two years ago, the expected pace of the housing recovery is now considerably weaker.

"In June 2010, the average cumulative appreciation in U.S. home prices expected by our panel was 10.3 percent for the years 2012 through 2014," said Terry Loebs, founder of Pulsenomics, in a statement.

"Now, two years later, the average prediction among our experts for the same period is just 3.5 percent. This translates into $1.25 trillion less housing wealth than expected nationally over the coming three years." 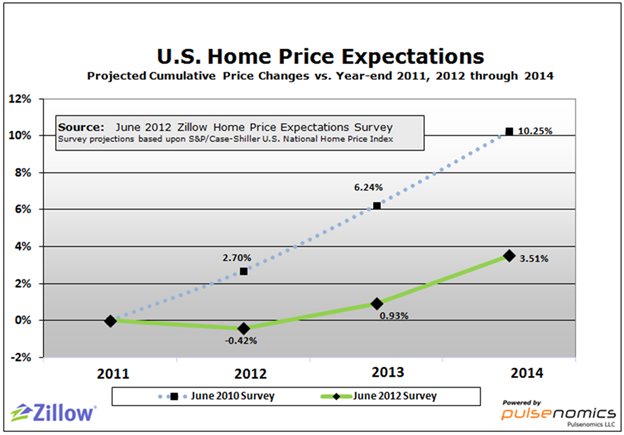