Existing-home sales rose slightly in January and prices continued their year-over-year climb on plunging inventory, according to a monthly

Existing-home sales rose slightly in January and prices continued their year-over-year climb on plunging inventory, according to a monthly report from the National Association of Realtors (NAR) released today.

Existing homes sold at seasonally adjusted annual rate of 4.92 million during January, down 0.4 percent from December but  up 9.1 percent from a year ago.

The national median existing-home price fell 4 percent from December but was up 12.3 percent from a year ago to $173,600. It was the 11th consecutive month to show an annual increase in median price — a string not seen since May 2006.

Existing-home inventory dropped 25.3 percent from a year ago to 1.74 million units, which represents a supply of 4.2 months at the current sales rate. That’s the lowest since April 2005, when inventory also equaled to 4.2 months of supply. In raw numbers, there were fewer homes on the market in January than at any time since December 1999.

NAR Chief Economist Lawrence Yun said buyer demand is still high and that tight inventory is the driving factor in the current market. "Buyer traffic is 40 percent above a year ago, so there is plenty of demand but insufficient inventory to improve sales more strongly," he said in a statement. "We’ve transitioned into a seller’s market in much of the country." 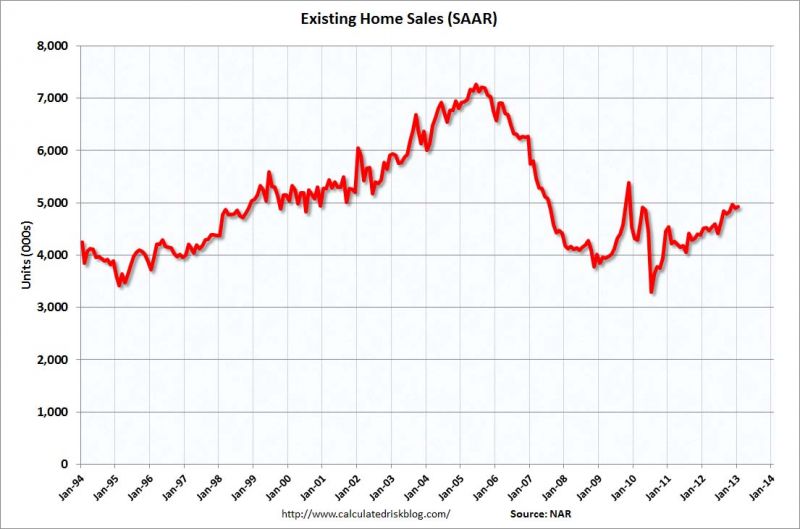 First-time buyers accounted for 30 percent of purchasers in January, unchanged from December.

Regionally, the West saw a 5.7 percent dip in existing-home sales from January 2012 to an annual pace of 1.15 million units and was the only region where sales didn’t go up on a year-over-year basis in January. Median prices were $239,800 in January, up 26.6 percent from January 2012, the largest yearly proportional price jump, by far, of any region.