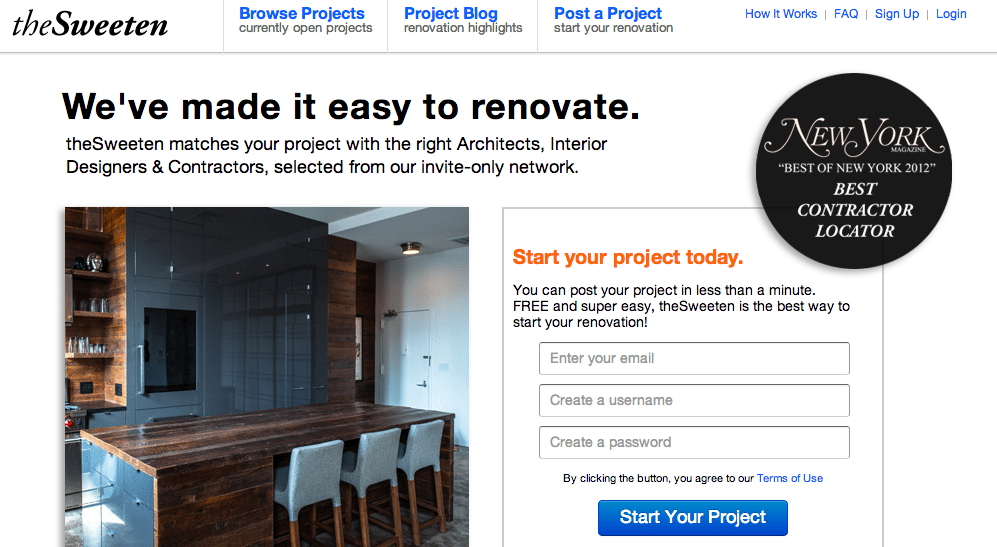 Marking another attempt to introduce consumer-professional matchmaking into the real estate industry, theSweeten aims to pair people eyeing renovations or remodeling projects with vetted contractors who are the most qualified to execute them.

The site also may prove a resource to brokers. One already plans to partner with theSweeten in order to better serve clients who are mulling remodeling projects.

“The market is really inefficient. Often firms get inquiries for projects that they’re not really interested in,” she said. “There’s no marketplace … this is where you hear all the horror stories.”

There are already referral sites like Angie’s List and HomeAdvisor (formerly ServiceMagic) that steer consumers to contractors listed in their directories. But those sites still don’t provide sufficient guidance, sometimes connecting consumers with contractors who aren’t really equipped to handle their projects, Lauer argues.

TheSweeten, however, holds a consumer’s hand throughout the entire search process, and even up until a project’s completion, she said.

“It’s really about understanding who’s the right fit for the $5,000 bathroom,” she said. “We only get compensated if we make the right match … our focus is making sure we get the right firms in front of the right projects.”

In addition to providing a source of business for contractors, theSweeten also may enable brokers to offer more value to clients. Last month, the company said it was in talks with a major New York City brokerage about a partnership.

In such partnerships, agents could tap theSweeten for estimates of potential remodeling projects that clients ask about, as well as its network of remodeling specialists, said theSweeten co-founder Preeti Sriratana.

“Even though they may have a couple names, they don’t have the resources and depth that we have,” said Sriratana, speaking of brokers who advise clients on remodeling projects. “We would be able to say, ‘Oh, we’ve done projects in that building before … we can tell you average price per square foot.'”

Currently, theSweeten serves only New York City and  has an active contractor membership of around 120 that it has selected from more than 2,000 applicants since launching in July 2011, Lauer said. To apply for membership, contractors ranging from “tile guys” and landscapers to architects and interior designers must undergo an hourlong interview, submit four references and later meet for an in-person interview, Lauer said.

A survey the company conducted showed that, on average, 75 to 80 percent of inquiries that contractors receive through theSweeten’s network translate into work, Lauer said. She said that, in comparison, the typical conversion rate in the industry is about 50 percent. The same survey also found that the network appeared to boost a member’s revenue by 15 percent.

The site earns money by charging members a commission ranging from about 1 to 3 percent on projects that they receive through it .

Do you think theSweeten could be a useful resource for you?