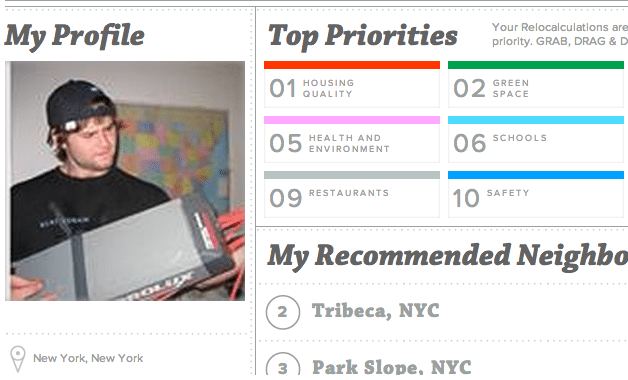 Relocality is certainly right about one thing: I don’t give a hoot about shopping.

The “neighborhood discovery” site correctly judged that, of the 12 neighborhood characteristics it uses to match people with neighborhoods, shopping is the least important to me.

But in a sign that the site may have room to grow, Relocality was off the mark in gauging my appreciation for “housing quality.”

After crawling my Facebook profile for clues about my preferences, the site determined that housing quality was my top priority — a conclusion that nobody who’s seen the places I’ve actually lived would be likely to reach.

But that’s probably excusable, given that Relocality only recently launched.

Seeking to fill a void partly created by laws that make disclosing certain demographic information legally hazardous for agents, Relocality uses home searchers’ Facebook data to point them towards neighborhoods that jibe with their interests without the help of real estate professionals.

“It’s that virtual knock on the door, going beyond the four walls of a home into what it’s like in the context of that neighborhood and what it’s like to live there,” said Diane Szoke, founder of Relocality. “It’s the first product to answer that question: Where will I fit in?”

The site, which currently serves only New York City, recommends neighborhoods by assessing the importance of 12 neighborhood “dimensions” like green space and safety to a user, and then matching that user’s dimensional configuration with neighborhoods whose characteristics most closely couple with it.

After a person gives Relocality access to his or her Facebook page, the service conducts a sophisticated analysis of it. That doesn’t just include reading a person’s biographical information and likes or dislikes, it also means crawling the person’s photographs, and possibly even drilling down into his or her wall content (Szoke, who’s also a real estate agent, would only reveal so much of the “secret sauce” that greases Relocality’s data-crunching).

The site’s photo-scanning technology pinpoints photos of children and food and factors them into its determinations. But it doesn’t appear to have the ability to recognize beer bottles or liquor ensembles. (Relocality underestimated my fondness for nightlife in ranking it seven on the ladder of my priorities.)

For evaluating neighborhoods, Relocality leverages troves of open-source information — anything from Foursquare to U.S. Census Bureau data — to characterize neighborhoods for matching.

After making pairings, Relocality presents its findings to users in a Pinterest-inspired recommendation page.

Rankings of a user’s priorities appear at the top of the page. Beneath, there is a list of a user’s top-recommended neighborhoods followed by collages of media that are curated to paint portraits of those neighborhoods in a way that resonates with the user (based on their priorities).

If users think Relocality has misread them, they may adjust their dimensions, and the site will make new recommendations. In the future, Relocality will supplement its Facebook analysis with a few questions to enhance its assessments on the first go around, Szoke said.

By enabling people to independently find neighborhoods that match their interests, Szoke envisions Relocality as a product that will provide a service that scrupulous agents sometimes find challenging to provide themselves.

The Fair Housing Act, which prohibits agents from steering buyers and renters away from neighborhoods based on race, color, religion, sex, familial status or national origin, makes it risky for agents to reveal demographic information to clients.

“I’ve had situations where people ask me to find neighborhoods that fit a certain demographic and I would ultimately have to refer them to websites that have demographic data to find those neighborhoods,” Szoke said. “I would explain to them that under federal law that I wasn’t able to steer them to and from neighborhoods.”

Indeed, if a client expresses a desire to live in neighborhoods that fit a certain demographic mold, agents begin “skating on thin ice,” said Laurie Janik, general counsel at the National Association of Realtors.

Responding to questions on demographic data may be permissible, but it’s risky. At the least, agents “should never affirmatively volunteer” such information, Janik said.

What do you think? Can a website really help users discover neighborhoods that jibe with their interests without the help of real estate professionals? Join the discussion.

Walk Score's new neighborhood page offers marketing opportunity
Back to top
We are less than 1 week away from Inman Connect! Get your ticket for $99 before prices go up next week.GET YOUR TICKET×
Inmanpot
Log in
If you created your account with Google or Facebook
Don't have an account?
Create an Account
Forgot your password?
No Problem