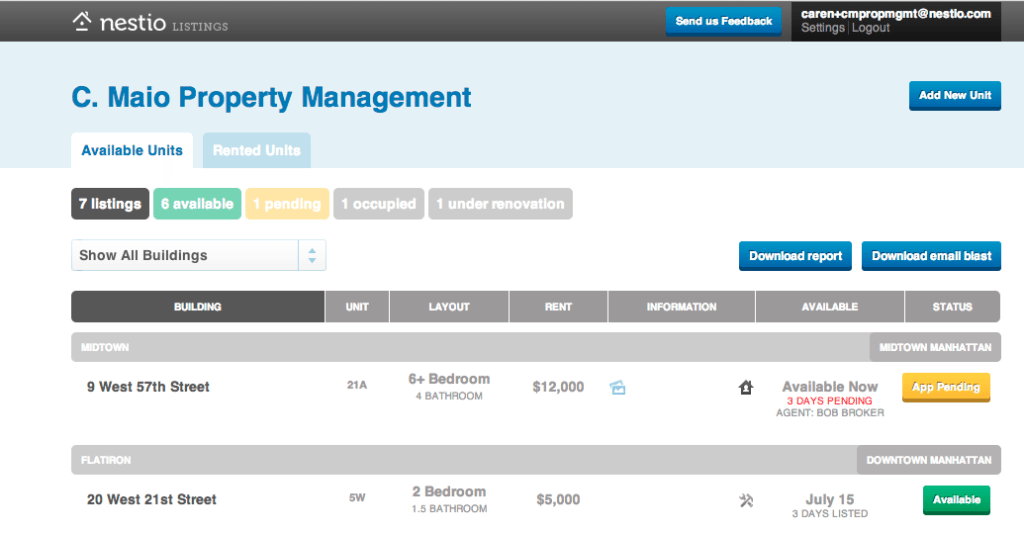 Like many landlords, Copperwood Real Estate used to struggle to efficiently manage and distribute its listings.

To populate its public-facing site, it would have to convert listing information that it maintained in a spreadsheet into code and insert that code into its site’s content management system. And to distribute its listings to its broker network, it would have to separately transplant much of the same data into email blasts, said Kevin Murphy, Copperwood’s director of asset management.

“They would write it all down, type it all out,” Murphy said of a vendor who created the blasts for Copperwood’s broker network. “It wasn’t consistent and it didn’t look great.”

But a new service that the company adopted about six months ago has changed all of that, he said.

Nestio Listings, which Nestio unveiled to the public today, equipped Copperwood with an internal listing management system that has enabled it to seamlessly update its listings, display those listings on a public-facing website and disseminate them to the company’s roster of preferred brokers, Murphy said.

But the product’s contribution to the rental marketplace may not end there. Its functionality and steady growth could very well provide it with the infrastructure to support a platform for the rental market that would resemble an MLS.

“We’re not mandating anyone using it,” Maio said. “But, ultimately, we’re trying to create a system that solves real problems.”

So far, Nestio has quietly put its software in the hands of 15 percent of New York City’s landlords, whose listings reach about 50 percent of the city’s brokers, Maio said.

Landlords may also view how long a listing has been vacant or a deal has been pending, a feature that the company added in response to feedback from landlords, Maio said. And its notification system enables employees to instantly update each other on changes in a company’s portfolio.

In addition, Nestio Listings automatically transplants listings marked as available in a landlord or property manager’s internal system into customized PDFs that it fires out in email blasts, simplifying what was once a painstaking process, according to Maio.

And it also powers a landlord’s public-facing listing site, constantly refreshing its listing information based on updates made by the landlord in its internal system. 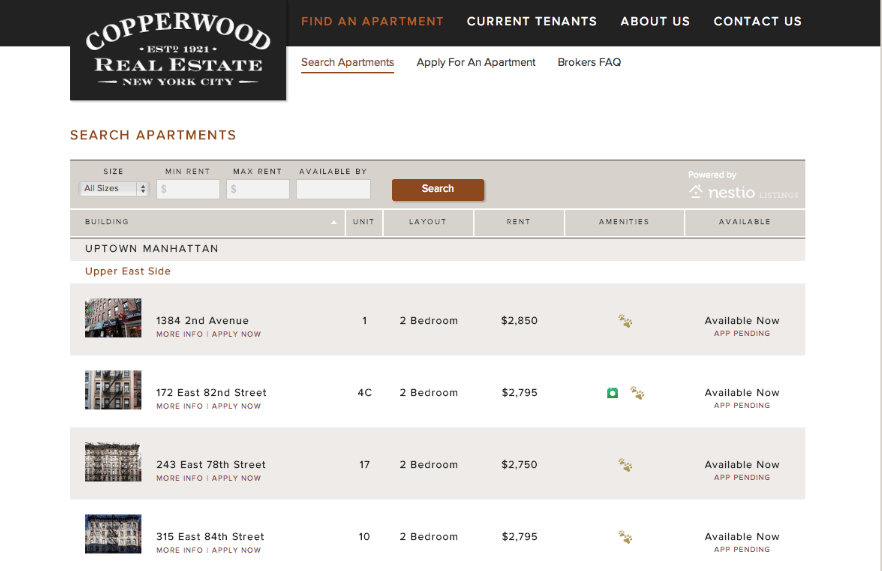 “We have a dashboard that the leasing manager updates, those listings go out to brokers and they will automatically always be live on our website,” Murphy said.

“When we get this email we know this email is real-time information,” Jacobs said. “For my agents not having … to call [a landlord] and actually get the one person on the phone who knows what’s going on there. It’s extremely valuable,” he said.

Jacobs noted that Nestio’s functionality and growing coverage of NYC listings also seems to lay the groundwork for a rental platform that might look something like an MLS.

“They could almost revolutionize an MLS,” Jacobs said. “I guess this is one of the closer things to it.”

The potential for Nestio to transition its portfolios of listings into a private listing service that allows brokers to see up-to-date listings and communicate with landlords is not lost on Maio.

Nestio is currently working on a paid listing service that would enable brokers to sign in and see the available up-to-date listings of the landlords they work with.

Zillow already offers rental directories in New York, Boston, Chicago and Miami that a spokesperson said allows landlords to share listings in real time with brokers who pay for access to the directories.

But since Zillow’s directory is not directly connected to landlords’ listing management dashboards, the listings aren’t real-time, Maio said. In contrast, a platform that Nestio might build would offer real-time listings, since they would reflect listing information in landlords’ dashboards.

“By focusing on a full end-to-end solution for landlords first, we’ve captured a larger market share of live information than any of the closest comparable services,” Maio said.

At any rate, Maio said that any MLS-like platform will be in “beta for quite a while.”

“With regard to opening up landlord listings to share with all brokers, we’re going to let our landlords drive that,” Maio said. “This could be something we handle in the future on a case-by-case basis.”