One day this summer, a University of Chicago student biking to school was struck by how a sculpture featuring figures holding their heads in exasperation seemed to mirror the mood of many of his college peers, who at the time were mired in finals week, according to Yuval Degani, president of Dream Town Realty.

Captured by the parallel, he whipped out his smartphone and shot a photo of the angsty figures, Degani said.

That proved to be a smart move on the student’s part: The photo ultimately bagged him $2,500, after garnering the most votes in a Facebook photo contest hosted by Dream Town Realty.

Cash prizes were just one aspect of the robust marketing campaign that Dream Town held over the summer. The competition’s success demonstrates that hosting photo contests can help catapult a broker’s Facebook following and boost online engagement.

Calling for submissions of photos of the Windy City, “Chicago in Focus” helped Dream Town collect more than 4,000 likes on its Facebook page in just one month, more than tripling the amount the page had gathered over the four previous years of its existence.

It’s also reinforced Dream Town’s image as an innovator, and has reeled in at least one client just weeks after it concluded, argues Degani.

Dream Town hosted the contest during the month of August, and watched as participation snowballed. During the first three weeks, people submitted about 750 photos as Dream Town gained 1,000 likes, Degani said.

Then it exploded: In the final week, the contest purportedly drew 1,400 more submissions and generated more than 3,000 additional likes.

“I thought that was astonishing,” Degani said.

The results of “Chicago in Focus” weren’t the product of a few volleys of calls to action lobbed onto Dream Town’s Facebook page. The broker put a lot of work into both organizing and cultivating the contest.

Not only did the broker dangle the reward of $7,000 in cash prizes, it fired notices off to its database of more than 500,000 contacts and solicited the participation of local art students and photographers, according to Degani. 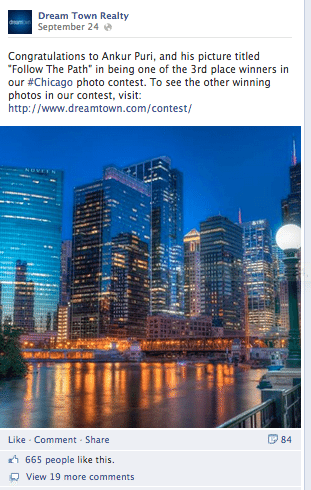 The broker, Degani said, also deftly converted interest into Facebook likes by deploying a savvy photo contest feature, something its developers worked on for three months.

The feature forced participants to like Dream Town’s Facebook page in order to submit photos and also prompted them to share the contest with friends to generate votes for their submissions.

Based on the submissions that collected the most Facebook votes, Dream Town dished out one $2,500 first-place award, two $1,000 second-place awards and five $500 third-place awards.

The contest marked the second time Dream Town hosted such a competition, but represented a sharp departure from its original iteration.

The first time around, Dream Town largely promoted the contest through print, even purchasing ad space on city buses. Later, it published 10,000 copies of a compilation of some of the contest’s submissions, many of which its agents purchased and distributed to clients for coffee-table clout.

But for the second go, Dream Town wanted “to create a new parameter” for the competition, and opted to germinate the contest on Facebook.

“Chicago in Focus” has proven to be a gift that keeps on giving, according to Degani. Every day, the broker posts a photo submission for the contest, many of which receive upwards of 100 likes, he said.

The contest even directly generated a lead. When picking up his check, one contest winner revealed that he wanted to buy a home.

“He won his prize, and he also became a client that day,” Degani said. 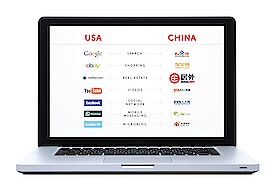 Use social to sell to overseas buyers

How the customer relationship has changed in the social era [VIDEO] 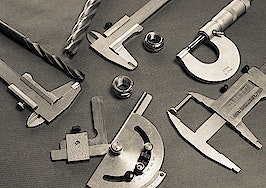 Building and measuring the social world [VIDEO]
Back to top
Only 3 days left to register for Inman Connect Las Vegas before prices go up! Don't miss the premier event for real estate pros.Register Now ×
Limited Time Offer: Get 1 year of Inman Select for $199SUBSCRIBE×
Inmanpot
Log in
If you created your account with Google or Facebook
Don't have an account?
Create an Account
Forgot your password?
No Problem