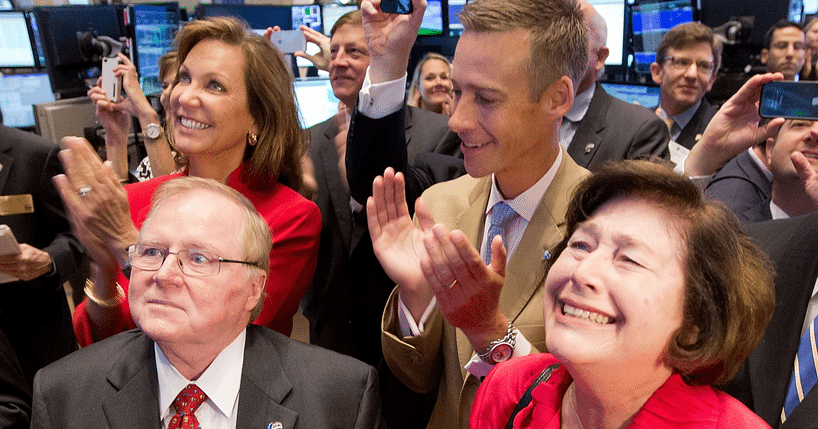 After setting the price of its shares at an initial public offering of $22 yesterday, Re/Max Holdings Inc. saw its share price jump 19 percent to open trading today on the New York Stock Exchange at $26.25.

The bullish opening — on a day that also saw shares in Zillow and Trulia posting gains — shows Wall Street remains optimistic on the housing recovery.

“We looked at it for a number of years but the timing just wasn’t right for it and now the timing’s perfect,” Re/Max CEO Margaret Kelly told CNBC. Kelly, who has been CEO since 2005, said that the combination of the housing recovery and the strengthening economy made now the right time to take the 40-year-old company public.

When asked about how to think about Re/Max going forward, Kelly said, “We are a franchisor who happens to be in the real estate business.” Out of the 6,300 offices affiliated with the firm worldwide, only 20 are company-owned, she said.

“We’re beginning to pay dividends and we would like to grow those dividends to what traditional franchisors pay out,” Kelly said.

“Congratulations to our friends at Re/Max on their IPO. $RMAX @remax @DaveLiniger,” tweeted Zillow CEO Spencer Rascoff this morning.

Analysts are comparing Re/Max to brokerage and franchise giant Realogy, which went public last October on the New York Stock Exchange when it opened at $32.90, 22 percent above its IPO price of $27. Realogy is currently trading above $43.

Billed as a less expensive but still solid bet on the real estate franchise and brokerage market, Re/Max might be taking some action from Realogy, which, unlike Zillow and Trulia, has remained relatively flat so far in trading today.

Re/Max expects to net at least $194.2 million from the IPO of 10 million shares of class A common stock and possibly more if underwriters exercise their option to purchase an additional 1.5 million shares.

The IPO continues a Wall Street winning streak by real estate companies that have gone public recently, starting with Zillow in 2011, followed by Trulia and Realogy last year and now Re/Max. Shares in Zillow, Trulia and Realogy’s stocks have soared since they hit the public market.

Sources: Google Finance and Inman News *As of opening bell on Wednesday, Oct. 2, 2013.

The Denver-based company will use a large chunk of the proceeds — $120.3 million — to buy out a large shareholder, Weston Presidio, which purchased a 15 percent stake in the company for $40 million in 2010.

With a large portion of the remaining IPO cash, it will buy back master franchise regions in the U.S. and Canada. After reacquiring the Texas region in January for $45.5 million, it owned 10 of the 32 North American regions. 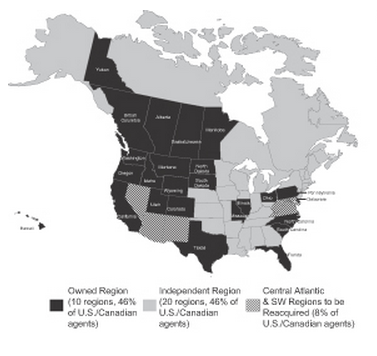 That number will jump to 12 when IPO-related pending deals to reacquire its Southwest Region for $20.2 million and Central Atlantic Region for $7.1 million close.

Approximately 74 percent of Re/Max’s 2012 $143.7 million in revenue came from its operations in the U.S., according to its S-1 registration statement. Since the firm generates much more annual revenue per agent in regions it owns ($2,288) than in regions it doesn’t ($803), it’s looking to continue buying back those regions.

After the acquisitions for the Central Atlantic and Southwest regions close, the number of Re/Max agents in the U.S. and Canada in regions the firms own will account for 54 percent of the total in the two countries, up from 46 percent before the acquisitions.

After the close of the pending reacquisitions, the firm now owns regions that span most of western Canada and the U.S. Regions that encompass states in the middle of the U.S., the Northeast and eastern Canada are still predominantly independent.

Some Re/Max office owners expressed concern that as the company reacquires the franchise rights to more of its regions along with the pressures that go along with being public, it might be pressured to overcrowd some of its markets with franchisees.

At least one broker is not worried.

“If you’re a great salesperson, why are you worried?” said Alma Logan, broker-owner of Houston-based Re/Max Real Estate Associates, which has 35 agents.

Logan says she will be buying Re/Max stock.

Editor’s note: This story has been updated. The story has also been changed to note that Re/Max expects to net $194.2 million (if underwriters don’t exercise their option to purchase additional shares), a revision from its previous estimate of $195.8 million.

Why Trulia, other tech companies are shunning Nasdaq for NYSE

Re/Max sets IPO price at bullish $22 per share
Back to top
Only 3 days left to register for Inman Connect Las Vegas before prices go up! Don't miss the premier event for real estate pros.Register Now ×
Limited Time Offer: Get 1 year of Inman Select for $199SUBSCRIBE×
Inmanpot
Log in
If you created your account with Google or Facebook
Don't have an account?
Create an Account
Forgot your password?
No Problem