In what appears to be a vote of confidence from several Silicon Valley luminaries, Amitree, whose Closing Time tool offers personalized homebuying checklists, has raised $2.7 million in seed funding from global venture capital firm Accel Partners and individual investors.

Individual investors include several former Yahoo execs, including founder and former CEO Jerry Yang, former Chief Technology Officer Farzad Nazem, and former Senior Vice President and Treasurer Gideon Yu, the current president and co-owner of the San Francisco 49ers and a former chief technology officer at Facebook and YouTube. Former Yahoo Senior Vice President Vishal Makhijani, who is also chief operating officer at Udacity and a former COO of Zynga, is also on board for the funding round.

Yahoo acquired Dapper in 2010, so this funding round seems to indicate this bunch of investors are both familiar with and have confidence in Aizen and Knegten’s work.

The two launched Closing Time in March 2013 with the aim of simplifying the homebuying process for consumers. With some input from buyers on their personal situation and finances, the tool generates a customized, understandable to-do list of tasks that are state-specific and outline each step of the process. Real estate brokerages that offer the tool can tailor each question, task and recommendation their buyers see.

“We’re excited to deliver on the promise of making stressful, complex processes, such as buying a home, simpler and more human,” Aizen said in a statement.

This investment “speaks to the huge opportunity in front of us to drive value for homebuyers and their agents alike,” he added.

In September, the San Francisco-based real estate startup announced a partnership with that city’s largest brokerage, Zephyr Real Estate, to offer the firm’s clients a branded version of the Closing Time tool.

Closing Time competitor Doorsteps launched a tool that allows lenders to engage users through the platform in July, not long after Move Inc. acquired the company. 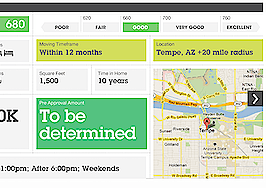 Doorsteps: Tap your real estate pro network to serve homebuyers
Back to top
Only 3 days left to register for Inman Connect Las Vegas before prices go up! Don't miss the premier event for real estate pros.Register Now ×
Limited Time Offer: Get 1 year of Inman Select for $199SUBSCRIBE×
Inmanpot
Log in
If you created your account with Google or Facebook
Don't have an account?
Create an Account
Forgot your password?
No Problem