Technology startups interested in breaking into the real estate industry can now apply for a slot in next year’s tech accelerator program from Second Century Ventures, the venture capital fund of the National Association of Realtors.

The program, REach, offers “intense exposure into real estate” for tech companies at a various levels of growth, not just early-stage companies, SCV said. Graduates from other accelerator programs may also participate.

Companies chosen for the nine-month program get direct access to more than 250 mentors and advisers — including executives, digital entrepreneurs and investors — and product feedback from a panel of more than 2,000 real estate practitioners.

“REach stands apart from other technology accelerators by creating a virtuous circle where young companies and the real estate industry benefit from each other’s expertise,” said Dale Stinton, NAR CEO, in a statement.

“REach offers Realtors cutting-edge technology already vetted by their association while fostering solutions that improve all stages of the homebuying and selling process for the industry. Simultaneously, the program gives startups a unique opportunity to tap the expertise and networks of the leaders of the real estate industry, giving them a step up for success.”

SCV is accepting applications for its 2015 program through Jan. 30, 2015, with an early application deadline of Dec. 19, 2014, for companies that want to “kick-start” their entry into the marketplace, SCV said. The program runs from April to December 2015.

Companies that engage in the public display of listings are “likely ineligible” for REach due to a noncompete clause in the realtor.com operating agreement between Move Inc. and NAR, but companies are encouraged not to “self-select” out of the program, Constance Freedman, Second Century Ventures’ founder and managing director, has previously said.

REach launched in 2013. Companies that completed the program that year include BombBomb, Lumentus, Planwise, Reach150, Updater, Treater and Workface. Six of those companies raised more than $16.5 million in follow-on financing and companies had growth rates ranging from 100-2,000 percent during the course of the program, Second Century Ventures said.

This year, eight companies participated: Back At You Media, Deductr, Desktime, Fundwell, SeaSuite by Goby, SendHub, SmartZip and WeVideo. The companies grew their customer bases by an average of 90 percent during the program and three of them have already raised more than $13 million in follow-on financing, Second Century Ventures said.

NAR does not promise funding as part of the REach program, and companies are required to give Second Century Ventures an equity stake in addition to paying an up to $25,000 marketing fee. Nonetheless, NAR has backed at least two of its incubator enrollees, address-change app Updater and financial planning firm Planwise. 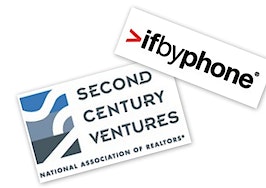 National Association of Realtors sells ownership stake in Ifbyphone
Back to top
Only 3 days left to register for Inman Connect Las Vegas before prices go up! Don't miss the premier event for real estate pros.Register Now ×
Limited Time Offer: Get 1 year of Inman Select for $199SUBSCRIBE×
Inmanpot
Log in
If you created your account with Google or Facebook
Don't have an account?
Create an Account
Forgot your password?
No Problem