Indianapolis is Redfin's seventh new market since launching an expansion push in May.
by Paul Hagey
Share this article
You successfully shared the article.
Close

Redfin has expanded into Indianapolis, bringing the number of metros where the fast-growing, Seattle-based brokerage has a presence to more than 40.

The firm launched an expansion push in May and had its sights set on close to 50 additional markets, including Indianapolis. Since that time it’s placed agents on the ground in Milwaukee, Wisconsin; Tucson, Arizona; and four smaller markets: Allentown, Pennsylvania; Fresno, California; Jacksonville, Florida; and Madison, Wisconsin.

Redfin’s growth tear in 2014 is not just limited to new markets. Buoyed by a $50 million funding round last November, the firm also debuted its first-ever TV ad, hired its first chief economist and made its first acquisition this year. 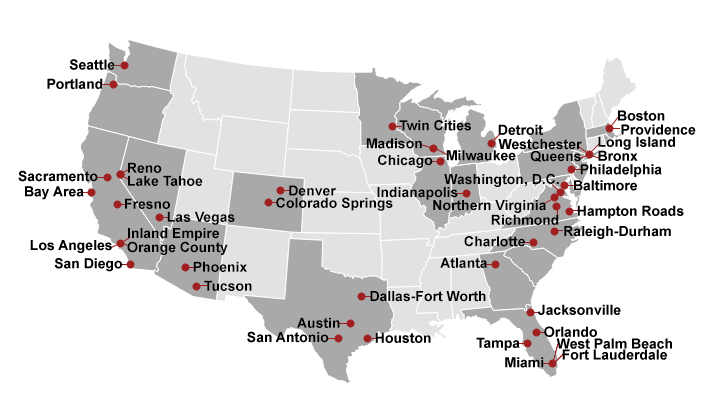 The number of Redfin’s active markets varies depending on how markets and metros are defined, but by the firm’s calculation it now has a presence in more than 40 metros. When Redfin entered Minneapolis-St. Paul, Minnesota, in February, Inman reported it as the brokerage’s 23rd market.

The larger geographic footprint gives Redfin broader brand exposure and the opportunity to grow traffic to its website. Although redfin.com still doesn’t provide search capabilities in many U.S. markets, it’s one of the top-ranked national real estate portals. In October, comScore data shows that Redfin attracted 7.2 million unique visitors to its site from both desktop and mobile devices, making it the fifth most popular real estate network that month.

Although consumers can use Redfin to search for homes in over 40 metros, Redfin doesn’t have agents in all of them. Metros where Redfin has property search capabilities but no agents include Detroit, Michigan; Santa Barbara, San Luis Obispo and the Lake Tahoe area in California; Richmond, Virginia; Reno, Nevada; and San Antonio, Texas.

In those markets, Redfin displays listings as a brokerage, but has no agents of its own. The company refers all leads to vetted partner agents who pay a referral fee to Redfin for deals they close from those leads.

That practice makes Redfin something of a “paper brokerage” in some markets where it has joined the local multiple listing service to gain access to the pool of listings brokers make available to each other, but does not provide brokerage services directly.

In May, Redfin CEO Glenn Kelman said the firm would no longer flip on its search platform in a market without also having Redfin agents in the area, something the firm had done in several markets for years, including Las Vegas and Austin, Texas.

Redfin spokeswoman Katy Klein says that Redfin agents have been hired for Richmond, San Antonio and Lake Tahoe, and will be announced soon. The Lake Tahoe agent will also serve clients in the nearby Reno, Nevada, market.

Indianapolis represents the new way Redfin has committed to launch all its new markets.

It turned on search on Monday and had an agent, Jake Johnson, set up and ready to go at the time, Klein said. Johnson also serves as Redfin’s market manager in Indianapolis where he will help oversee the hiring of additional Redfin agents and the firm’s operation in the region.

Unlike many brokerages, Redfin agents are employees. They receive a salary and benefits and are paid bonuses based on client satisfaction. Redfin also contracts with “field agents” who help its full-time agents fulfill duties including showing houses, putting signs in a lawn and more.

Earlier this year, Redfin was hit with a class-action lawsuit initiated by a former field agent who accused Redfin of paying her and other field agents as contractors when their duties allegedly fell more in line with that of an employee.