If there’s any doubt that Rupert Murdoch, chairman of realtor.com’s new overseer, News Corp., would be personally involved in the brewing portal war with Zillow, we got our answer. When news broke that ListHub, a subsidiary of realtor.com operator Move Inc., is set to cut off the feed of hundreds of thousands of listings it currently sends to Zillow, Murdoch was at Move’s headquarters in San Jose, California.

If there’s any doubt that Rupert Murdoch, chairman of realtor.com’s new overseer, News Corp., would be personally involved in the brewing portal war with Zillow, we got our answer this week.

On Tuesday, when news broke that ListHub, a subsidiary of realtor.com operator Move Inc., is set to cut off the feed of hundreds of thousands of listings it currently sends to Zillow, Murdoch was at Move’s headquarters in San Jose, California.

Murdoch has moved swiftly since News Corp. took control of Move in mid-November.

A week after the acquisition closed, realtor.com’s new owner began integrating the portal’s content with other News Corp. businesses, like The Wall Street Journal. In mid-December the global media giant announced that one of its own, Ryan O’Hara, would be taking over as CEO of Move. O’Hara took the helm on Monday.

With its pending acquisition of Trulia set to close soon, Zillow’s not standing by idle.

By ending its reliance on a platform owned by one of its chief competitors for a large chunk of its listings, the Seattle-based portal is looking to recover the mojo it had before Murdoch entered the scene when, like Marshawn Lynch, it ran over the competition in “Beast Mode.”

To avoid losing access to hundreds of thousands of listings it currently receives from ListHub, Zillow has launched what it calls a “Data Dashboard” to facilitate direct feeds from both brokers and multiple listing services.

Zillow says by the time the ListHub contract ends on April 7, it expects it will be receiving 1.6 million of its 1.8 million for-sale listings through the dashboard.

Late last month, Zillow agreed to an FTC request that it not close its acquisition of Trulia before Feb. 15, unless the FTC winds up its antitrust review of the deal before then. Inman Publisher Brad Inman reported this week that he’s heard from a reliable source that the FTC has completed its review and will sign off on the deal soon. 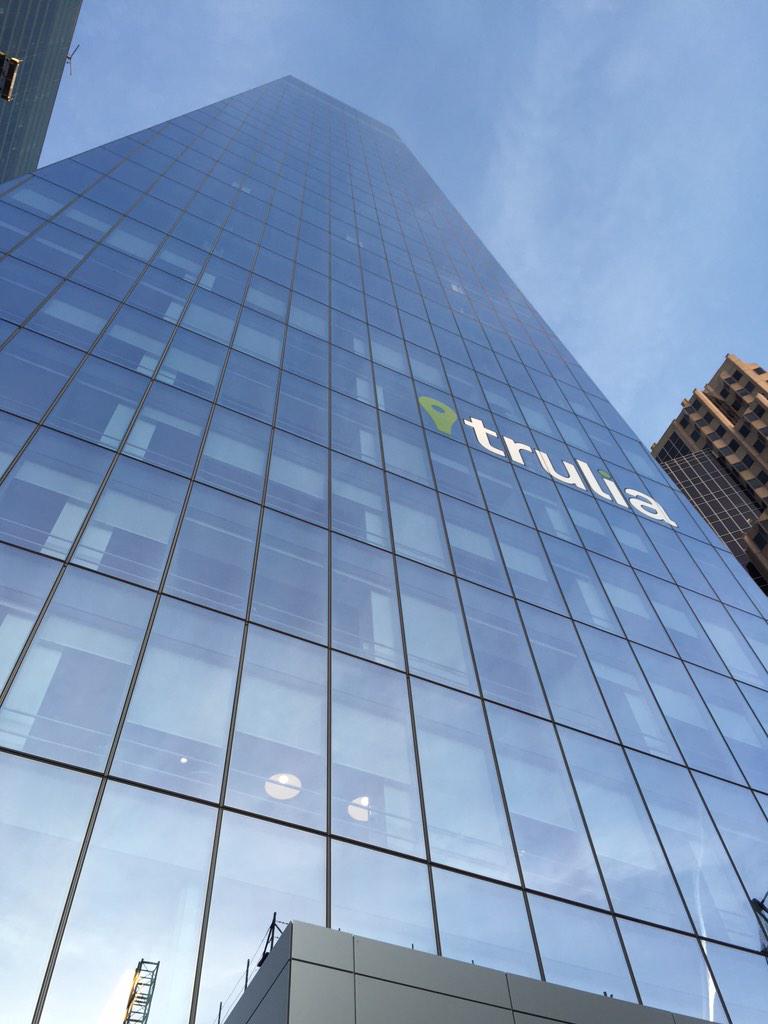 When the deal closes, Zillow will be the anchor tenant of skyscrapers in both Seattle and San Francisco. Trulia moved into its new digs just after Thanksgiving and just got its sign on the building. Trulia CEO Pete Flint tweeted the above photo.

Errol Samuelson’s role as chief industry development officer may have been curtailed by a preliminary injunction granted against him and Zillow in July, but he’s now cashing in on a portion of the Zillow stock options he was awarded when he joined Zillow in March. He sold 3,707 shares of Zillow stock for a total of $386,191 just before New Year’s.

The injunction came out of a lawsuit Move and the National Association of Realtors filed after Samuelson abruptly left Move in March. He hasn’t made a peep in public in his role as a Zillow executive since the injunction came down.

Each time execs at public firms sell company stock it gets reported to the U.S. Securities and Exchange Commission. Here’s who at the portals sold what and for how much since the last Portal Watch on Dec. 19:

Zillow is the most popular real estate site in the land by far, but its closest rivals, Trulia and realtor.com, gained desktop Web market share between November and December, according to Experian Marketing Services.

Despite losing a small chunk of its lead in the month, Zillow still gets twice the traffic of its nearest competitor.

Desktop Web traffic to the top sites in December 2014

It’s important to note that this Experian data doesn’t include mobile traffic, where the portals now get the bulk of their visits.

China, a future battleground for the portals?

In a mini-tweetstorm, Murdoch revealed his excitement about the business potential in China based upon a recent trip. Given News Corp.’s international scope, the rising economic powerhouse could be a future focus for realtor.com and Zillow after they mature in the U.S.

News Corp.’s stakes in real estate portals around the world

In September, Zillow began powering the U.S. home search for the popular Chinese real estate portal leju.com and the other portals owned by the Chinese media firm Leju Holdings Ltd. Leju’s users can search Zillow listings from a Leju-Zillow co-branded site, where they can see their search results in Chinese. Property detail information, however, is still in English.

Realtor.com launched an international version of its site in 2011. The site currently features listings from 43 countries that can be viewed in up to 11 languages.

Source: Google Finance *As of market close on Friday January 9, 2014