Lavish. Affluent. High-end. Exclusive. Those are just a few of the words that people who responded to Inman’s survey about luxury home buying and selling listed as preferable alternatives to “luxury,” a term that tends to raise hackles in certain circles.

Those are just a few of the words that people who responded to Inman’s survey about luxury home buying and selling listed as preferable alternatives to “luxury,” a term that tends to raise hackles in certain circles.

Are you at Inman’s Luxury Connect event? If not — watch it via live stream.

Whatever you call it, the high-end market is an integral part of the real estate industry, though not without its own struggles.

According to our survey, 39.42 percent of respondents said that global economic events have hurt luxury real estate, which leaves us wondering: What events specifically do you think have contributed to this downturn? Are we still suffering from 2008, or are we just starting to feel the sting from the economic crisis in China?

Over the course of 10 days, 208 people responded to this survey. Below are some of the more illuminating responses that we received.

What qualifies as luxury? 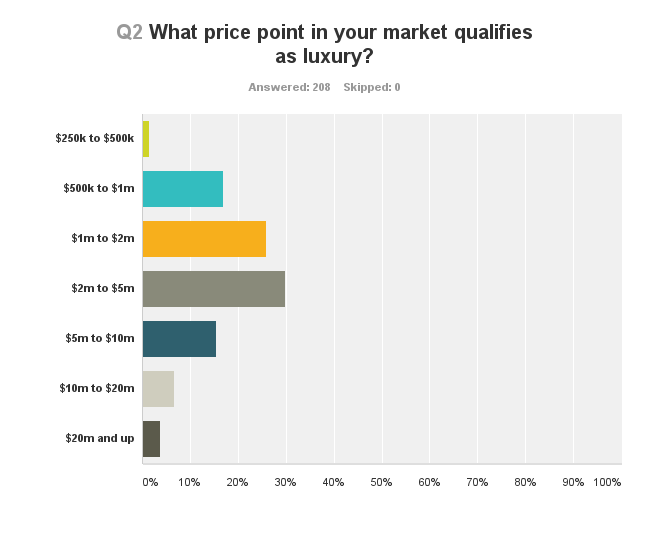 With 29.81 percent of the total, the $2 million to $5 million mark is the most popular starting price point for luxury properties. The next range, $1 million to $2 million, is not far behind at 25.96 percent.

The $2 million to $5 million mark is the most popular starting price point for luxury properties.

A small segment of respondents (3.85 percent) said that $20 million was the starting price point in their market. What’s the demographic for a client buying or selling a $20+ million home? Among our respondents who said this was their starting point, 62.50 percent said their clients were from the Middle East, and 75 percent said they came from new money. 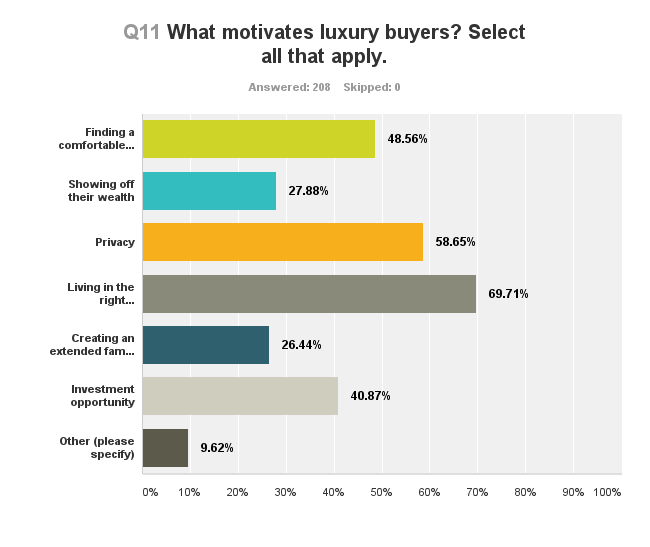 How would you describe the values of luxury homebuyers? 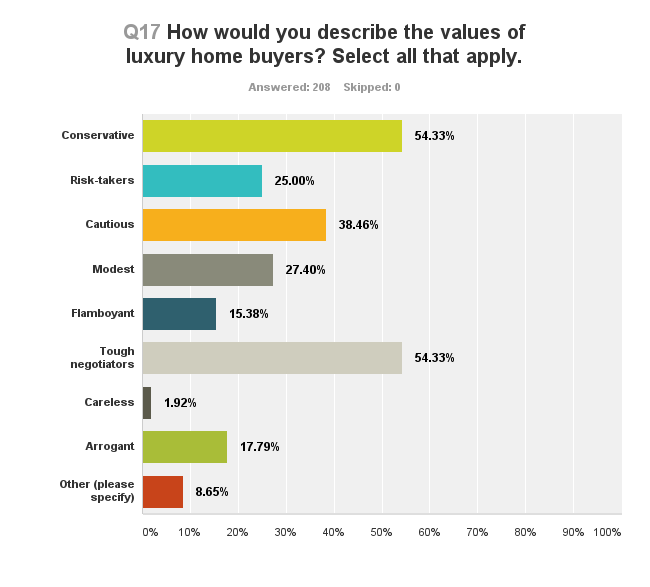 We have a tie! “Conservative” and “tough negotiators” were the first-place choices for terms to describe luxury homebuyers’ values. “Cautious” and “modest” were also popular responses, which begs the question: Are there any gamblers out there playing the luxury field? Apparently there are a fair amount, with “risk-takers” coming in with several votes, too.

What are luxury home sellers most worried about? 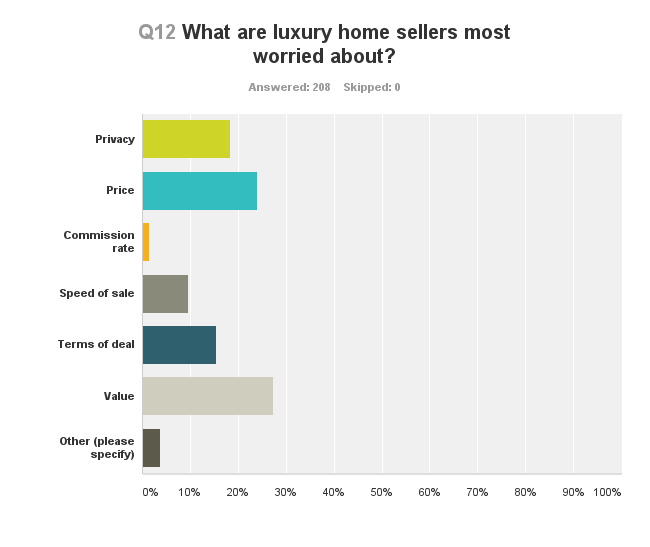 Not surprisingly, value and price rank highly among the things luxury homesellers worry about (27.40 percent and 24.04 percent, respectively).

On the other end of the spectrum, commission rate is of seemingly little to no concern, with only 1.44 percent of the vote. 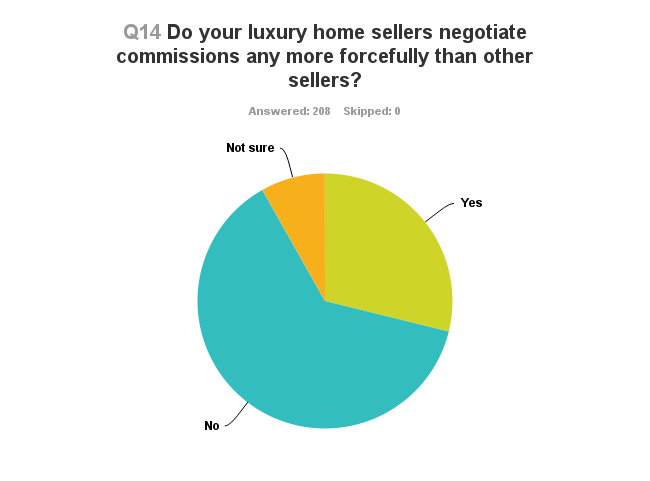 Does the stereotype that high-net-worth clients are tougher negotiators than the average client hold true? According to an overwhelming 62.98 percent, no.

It’s interesting to note that for those respondents who said their clients weren’t any more forceful in their negotiations than other sellers, 56.49 percent said their clients are 40 to 50 years old, conservative (58.78 percent) and paying cash (51.91 percent).

Do your clients ask about listing off-MLS? 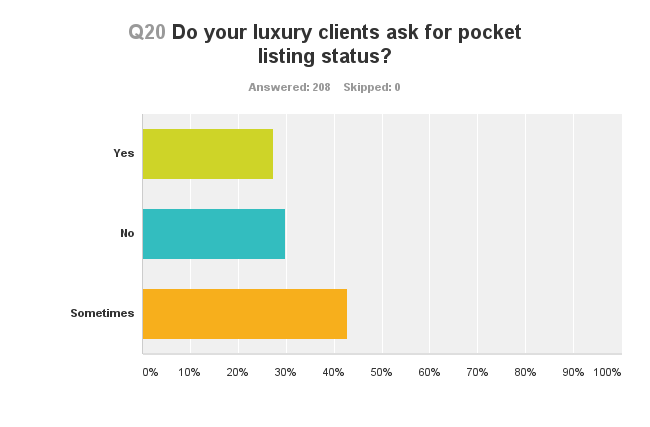 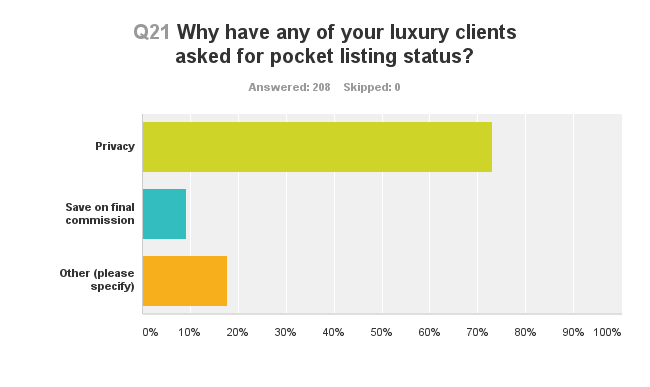 For those clients who do ask for pocket listings, the reason why was overwhelmingly “privacy” (73.08 percent).

Can any type of agent successfully sell a luxury home or represent a luxury buyer? 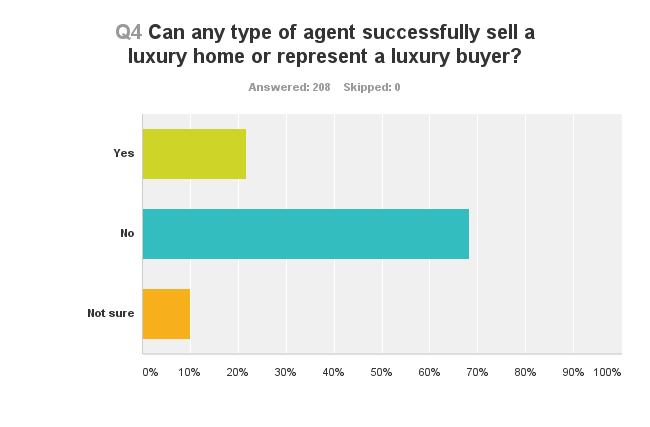 If you’re thinking that anyone can just jump into the luxury game, think again. The answer to this question was a resounding “no,” with 68.27 percent of all respondents. So what does it take to be a successful luxury agent? 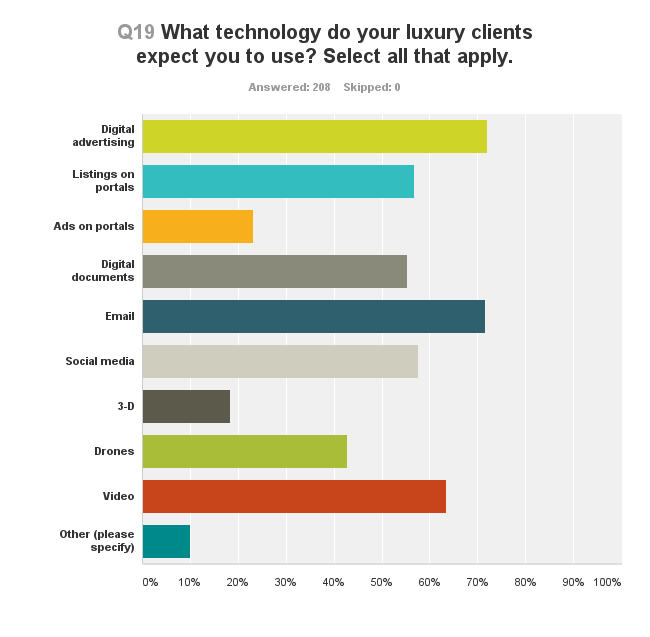 When it comes to technology, high-net-worth clients have high expectations, and they look to their agents to utilize several different tools and methods. 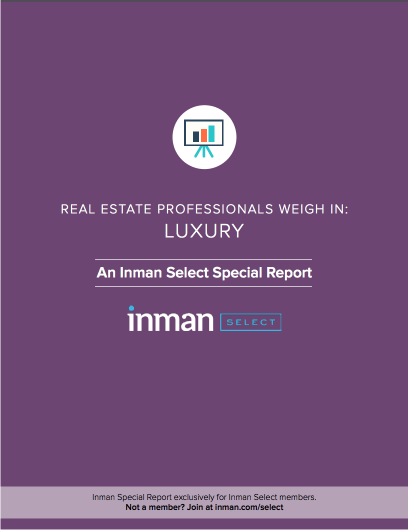 Do you pass the 'love test' in real estate?
by Audie Chamberlain Oct 14

The Salefish: How selling luxury real estate is like trophy fishing
by Greg Burns Oct 14

Should you lower your price 2 weeks after listing?
by Bernice Ross Oct 19

5 ways to keep up with Luxury Connect if you're not in Beverly Hills
by Morgan Brown Oct 22
Back to top
Only 3 days left to register for Inman Connect Las Vegas before prices go up! Don't miss the premier event for real estate pros.Register Now ×
Limited Time Offer: Get 1 year of Inman Select for $199SUBSCRIBE×
Inmanpot
Log in
If you created your account with Google or Facebook
Don't have an account?
Create an Account
Forgot your password?
No Problem